Over the last 100 days of quarantine, lockdown, and state of emergency, I’ve been living in and photographing the southern city of Málaga in Spain. In today’s collection of street art, we take a look a look at one of my favorite artists, Dadi Dreucol.

The first two weeks of the lockdown were stressful for me, especially when it was announced that all apartments, lodging, and hotels were to be closed and occupants should vacate. One of my Airbnb hosts sent me this message: “If someone knocks on the door, don’t answer. It’s the police checking to see if the apartments are empty. You’re not supposed to be there.”

Going stir-crazy in my small apartment with anxiety, I began to vary my walks to the grocery store (the only legal way I could be outdoors) and during this week, I started to explore the alleys and side-streets of Malaga where I would hopefully be out of sight of the endless patrol cars. That’s where I came across my first piece from Dadi Dreucol.  There is all variety of street art in Málaga ranging from the transcendent to the inspirational to the downright bizarre, but this was the first one that made me laugh out loud.

Dadi Dreucol (a pseudonym that reads “locuerdidad” backwards)  is a prolific street artist mainly found working around the city center of Málaga. His works have a cheeky quality, with multiple pieces of art focused on the concept of creating art. Dreucol describes himself  “a multidisciplinary artist, whose work revolves mainly around public art and its problems.”

Here’s a few more works from his his series “OFFLINE” along with a few quotes from the artist. 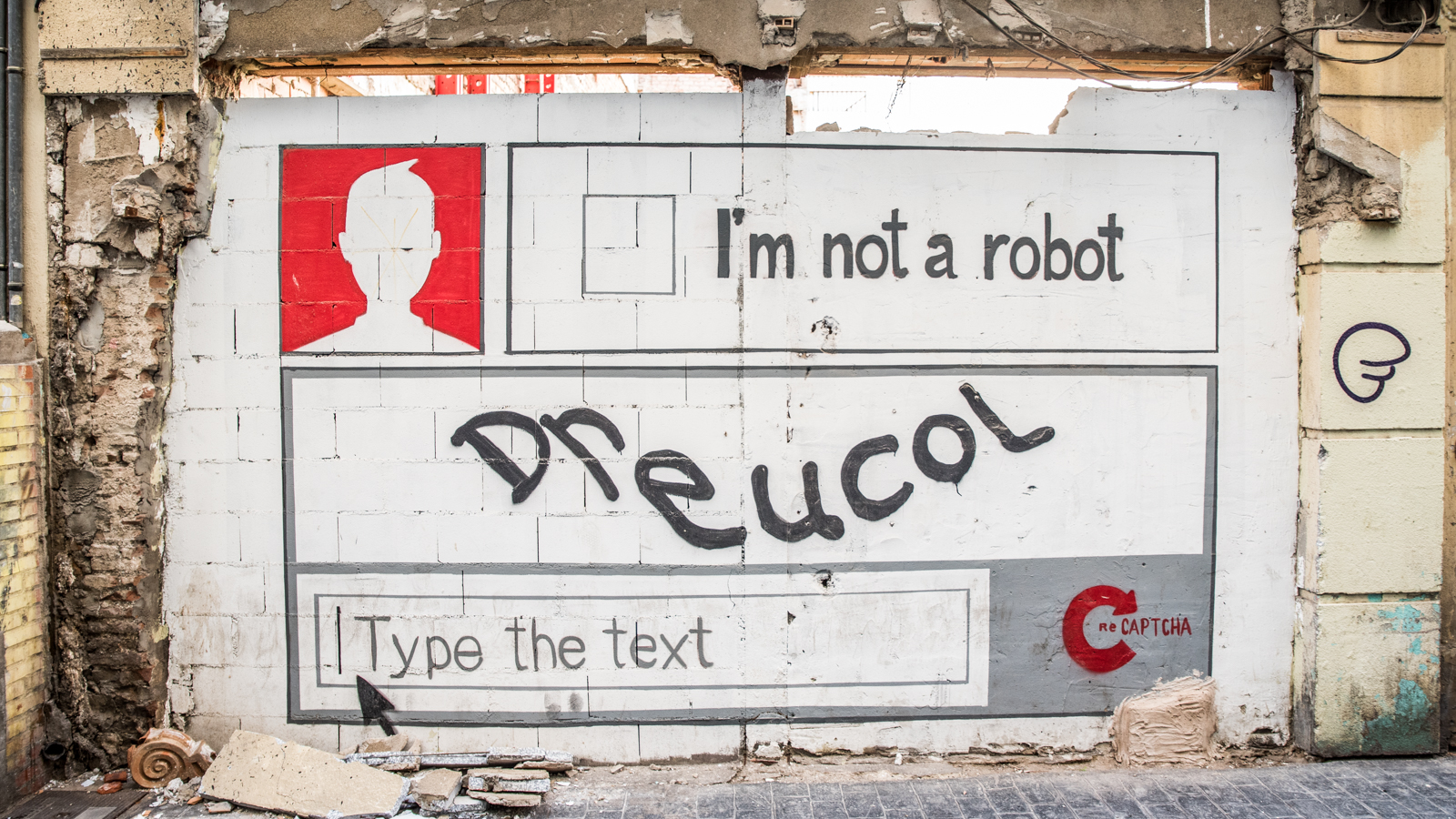 “When I see this message on virtual world I use to wonder if I am robot or not.” – Dreucol 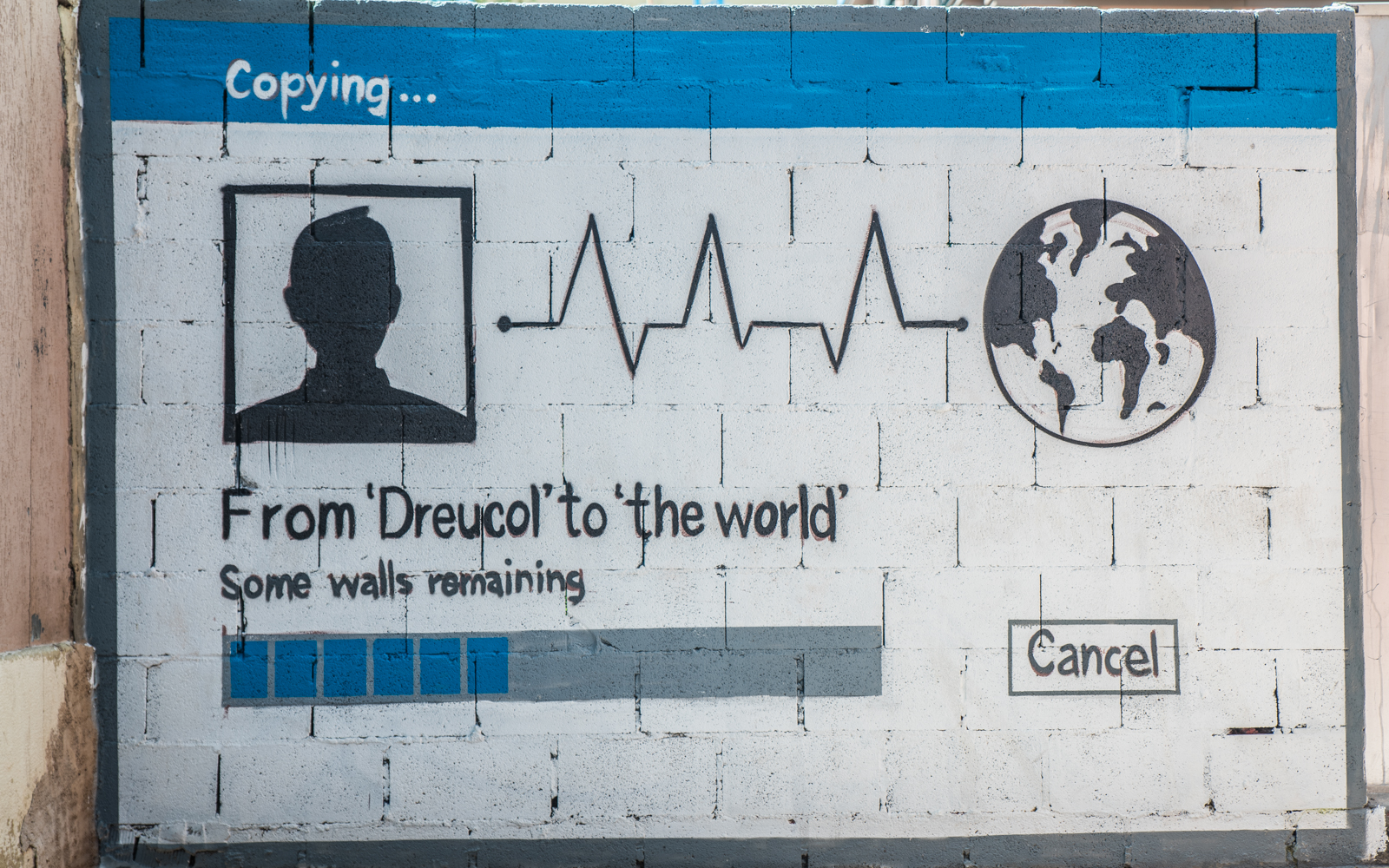 “When I was finishing it I had to run away because the situation got complicated. Then I realized that it would be funny because I should have written ‘I am not feeling lucky after all’. “ – Dreucol 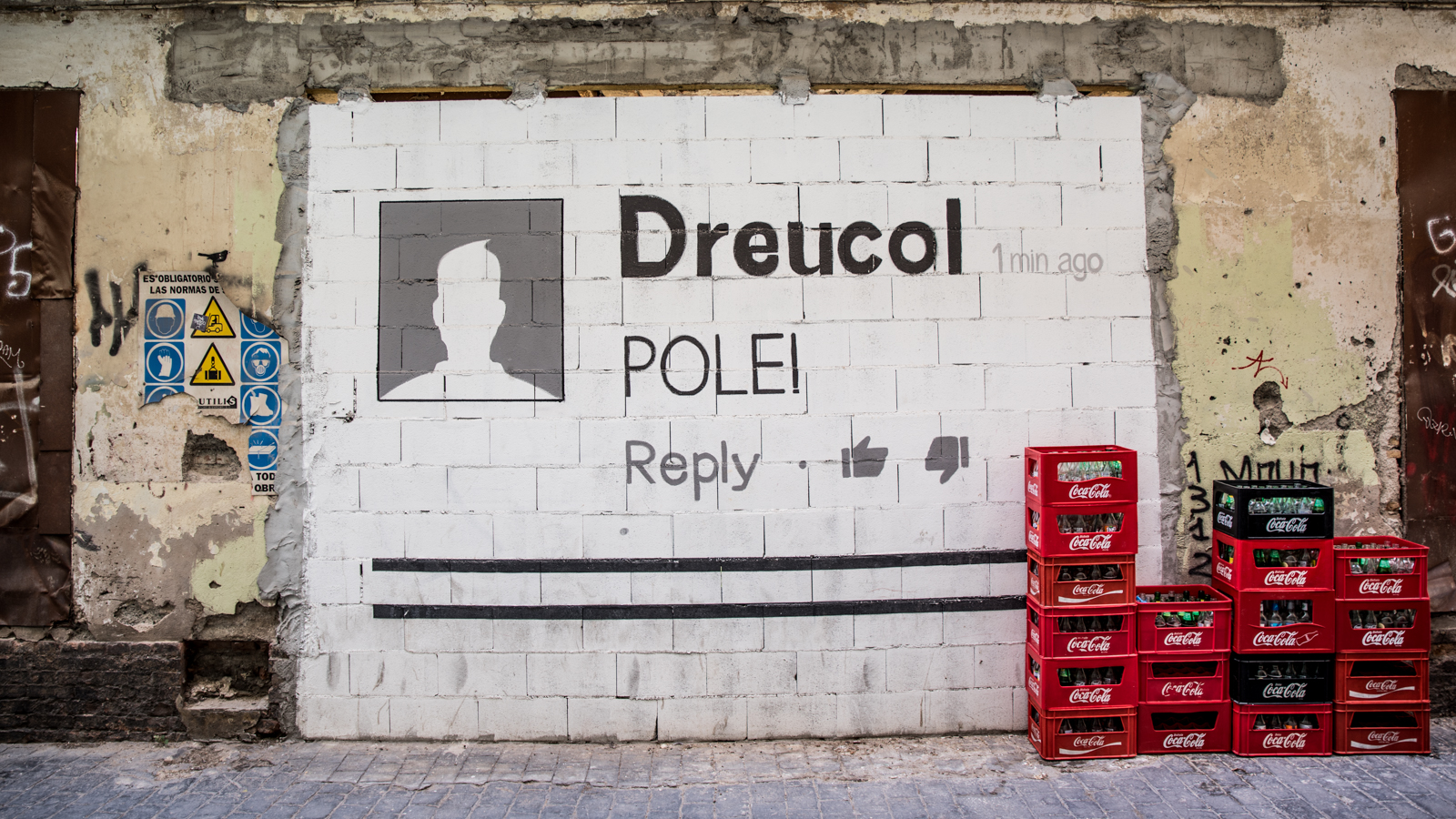 Speaking of running away because of complicated situations, I got a small taste over the next two months of creating art under pressure. In most cases, I was far outside the tiny legal radius of my lockdown. I had to take photos quickly without drawing notice, something I had always taken for granted. I began to plan my ventures more carefully. 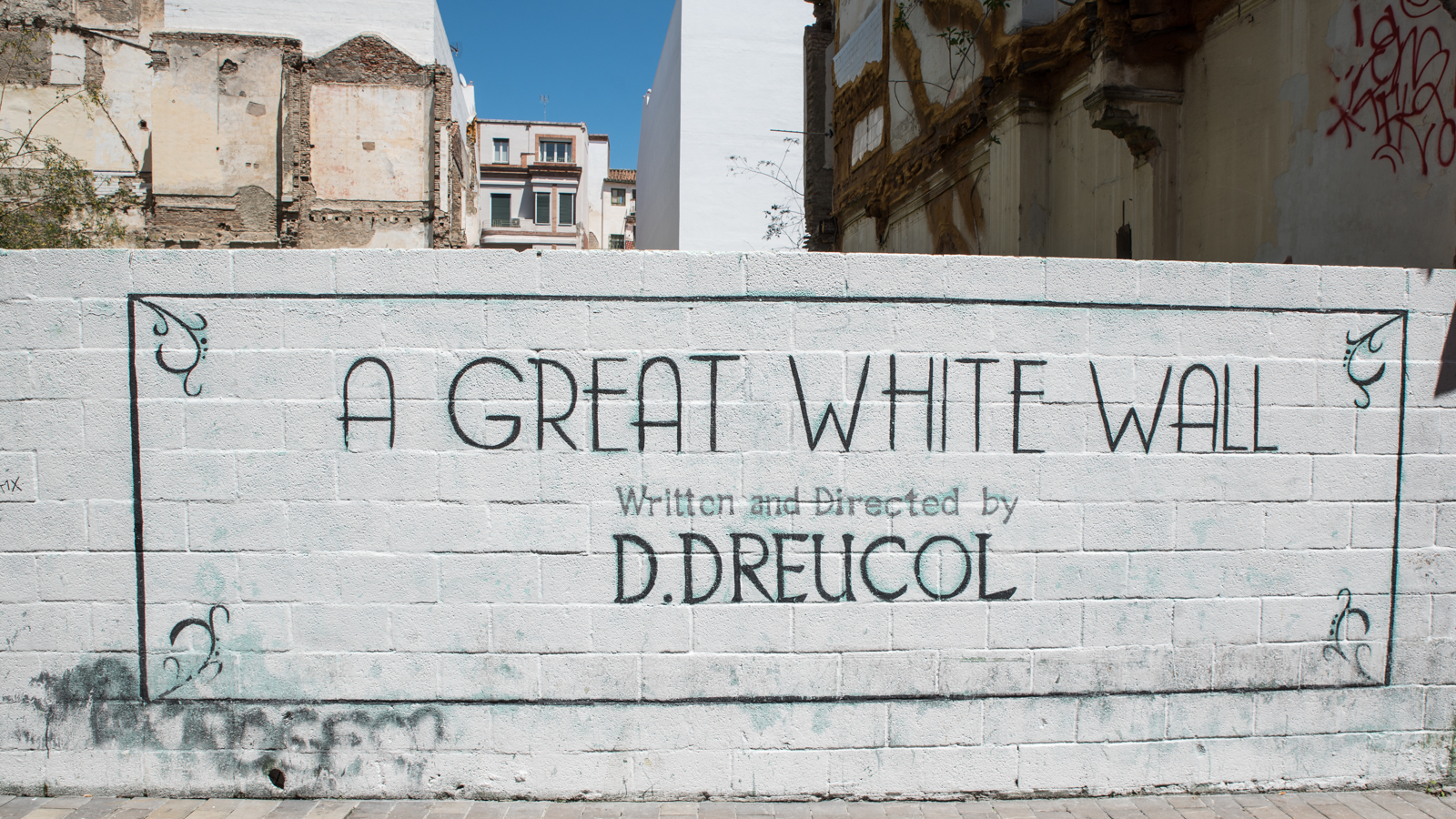 Here’s one of my favorites where he paints a receipt of the associated costs (both material and immaterial) associated with painting the mural.  I found this one when I crouched in between two parked cars to hide from cars during a passing patrol. 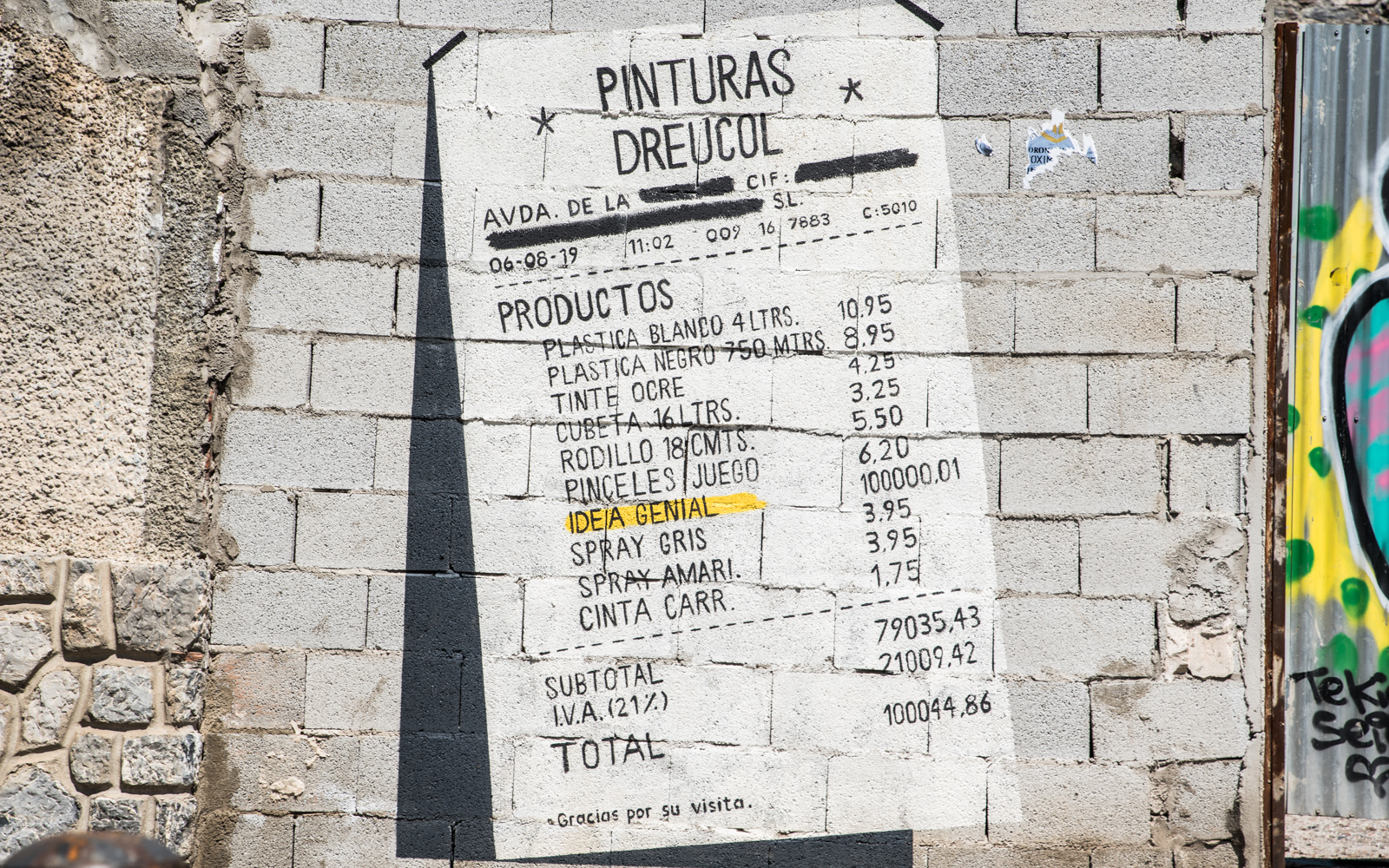 The narrow alleys of  the city center free were also an ideal place to find cover, and in here I came across a number of wordy pieces. Not understanding Spanish, I spent quite a bit of time translating to find that they were exquisitely crafted burns. 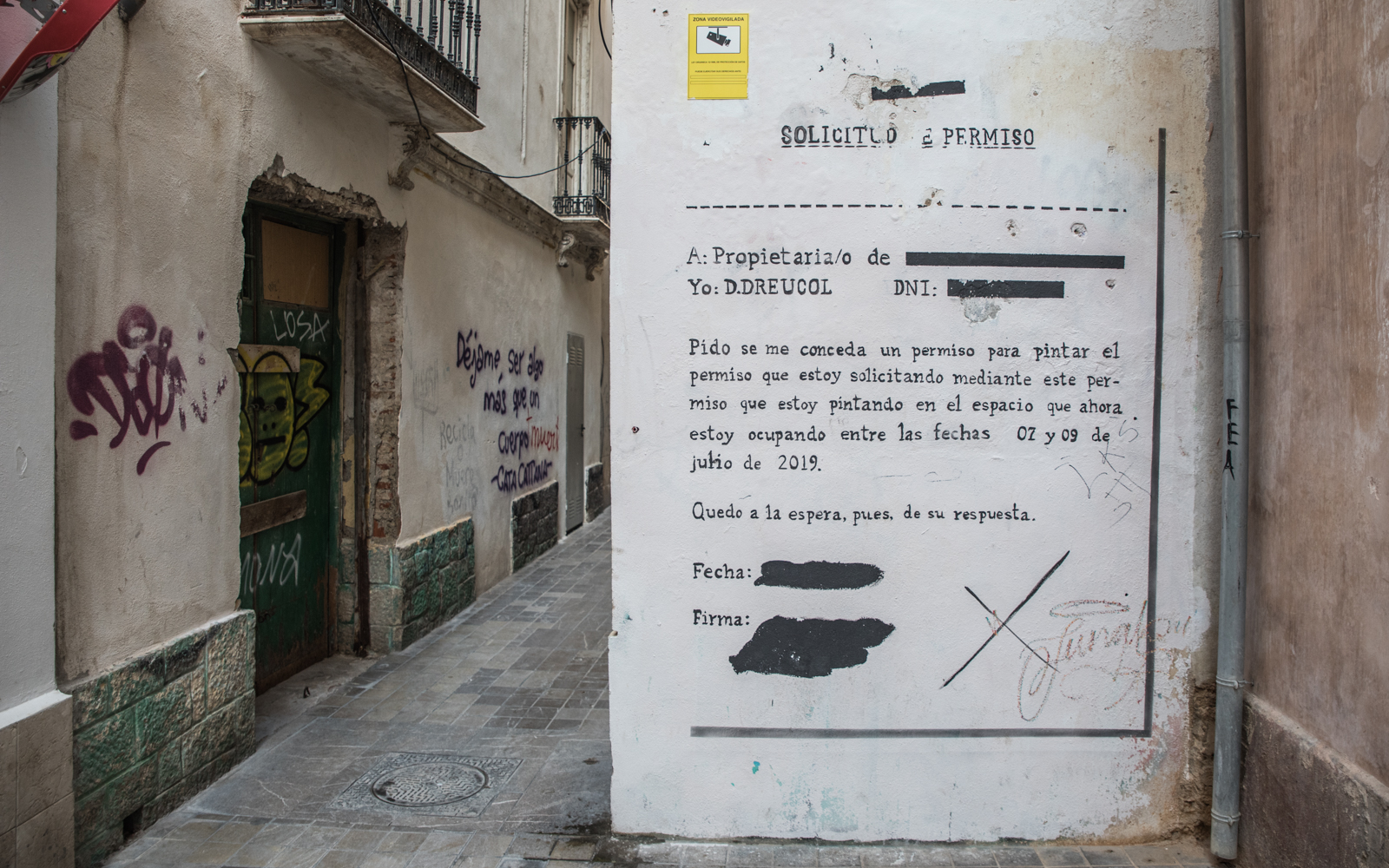 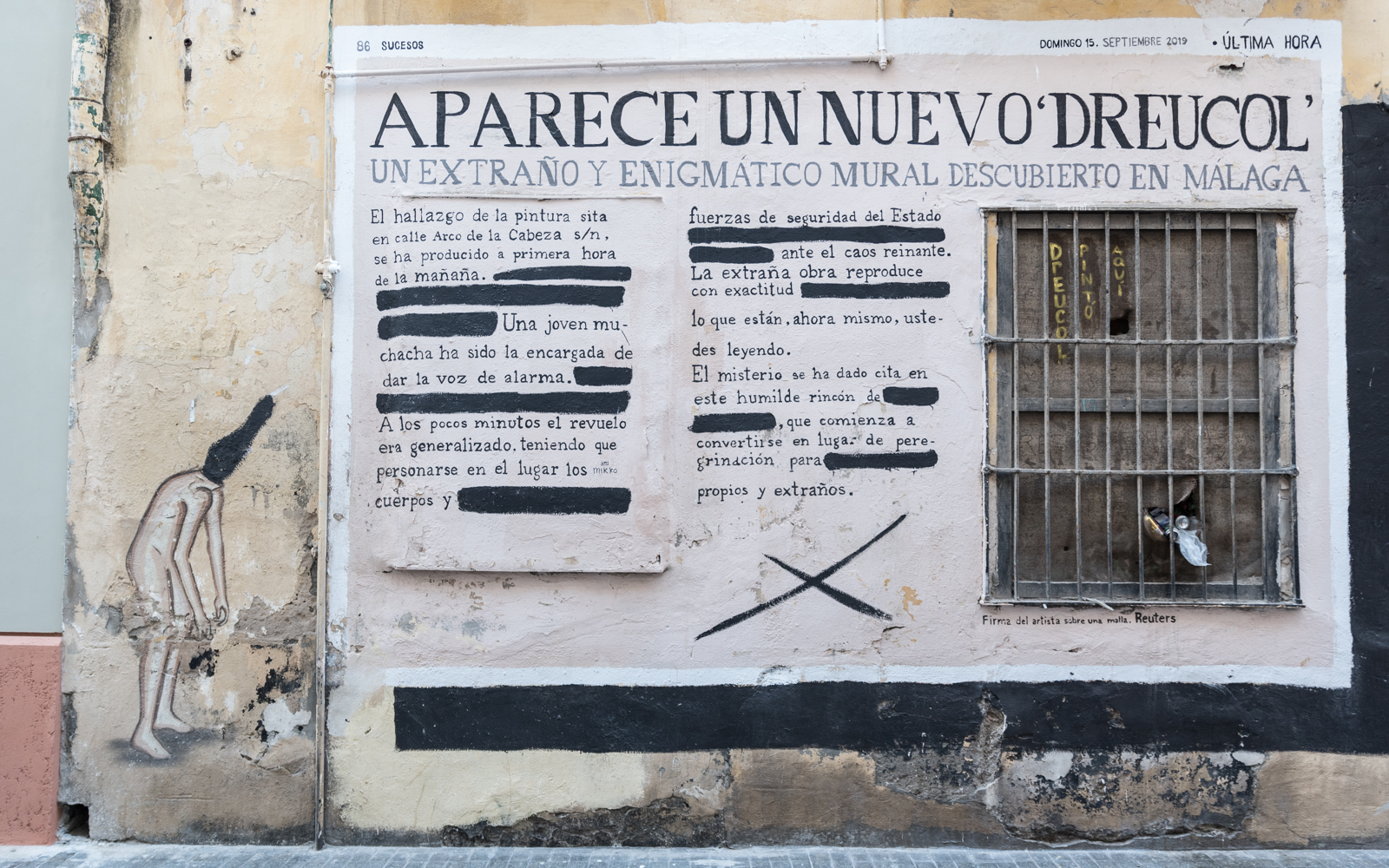 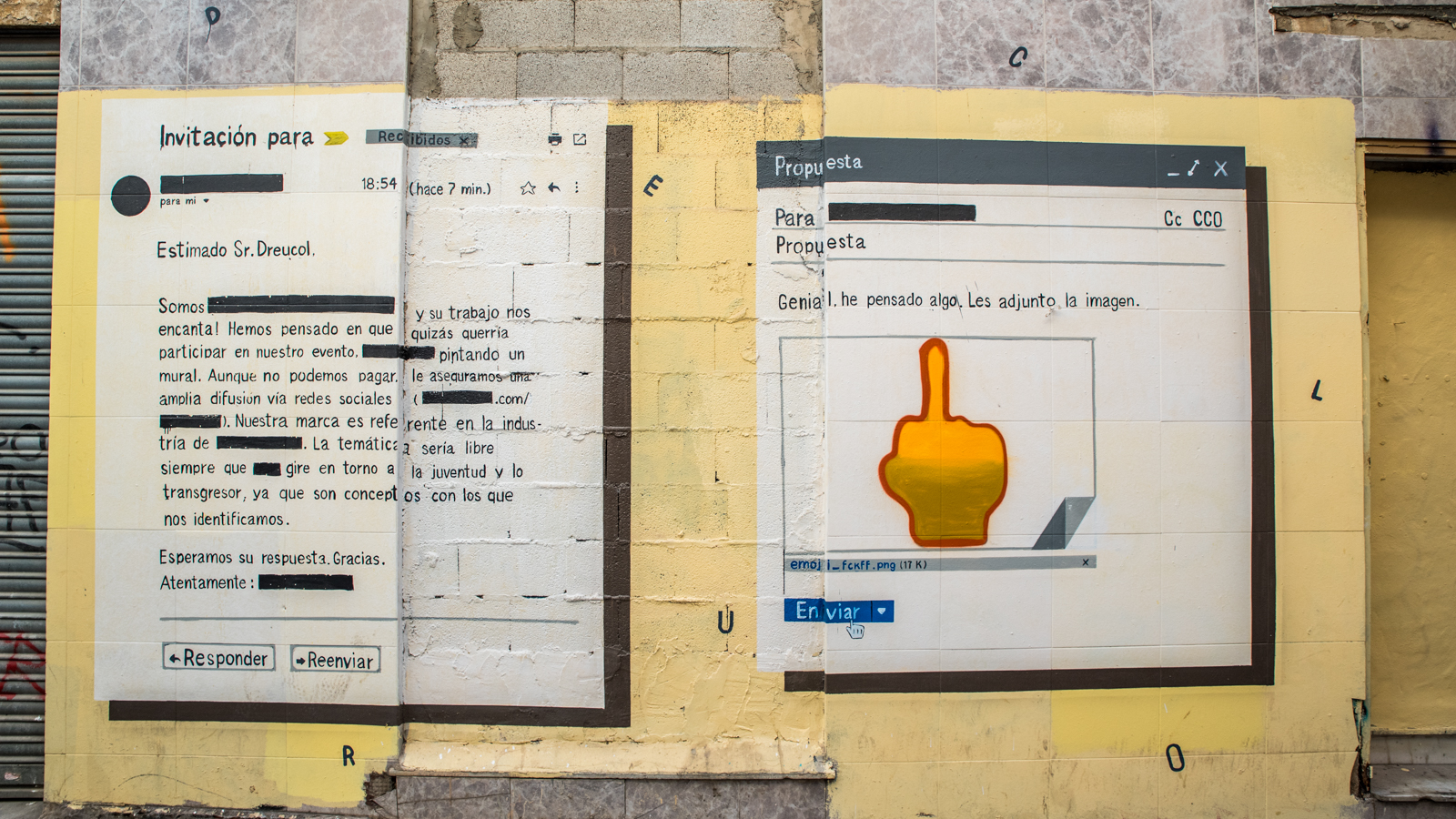 Here are a few more that can be found in the city center: 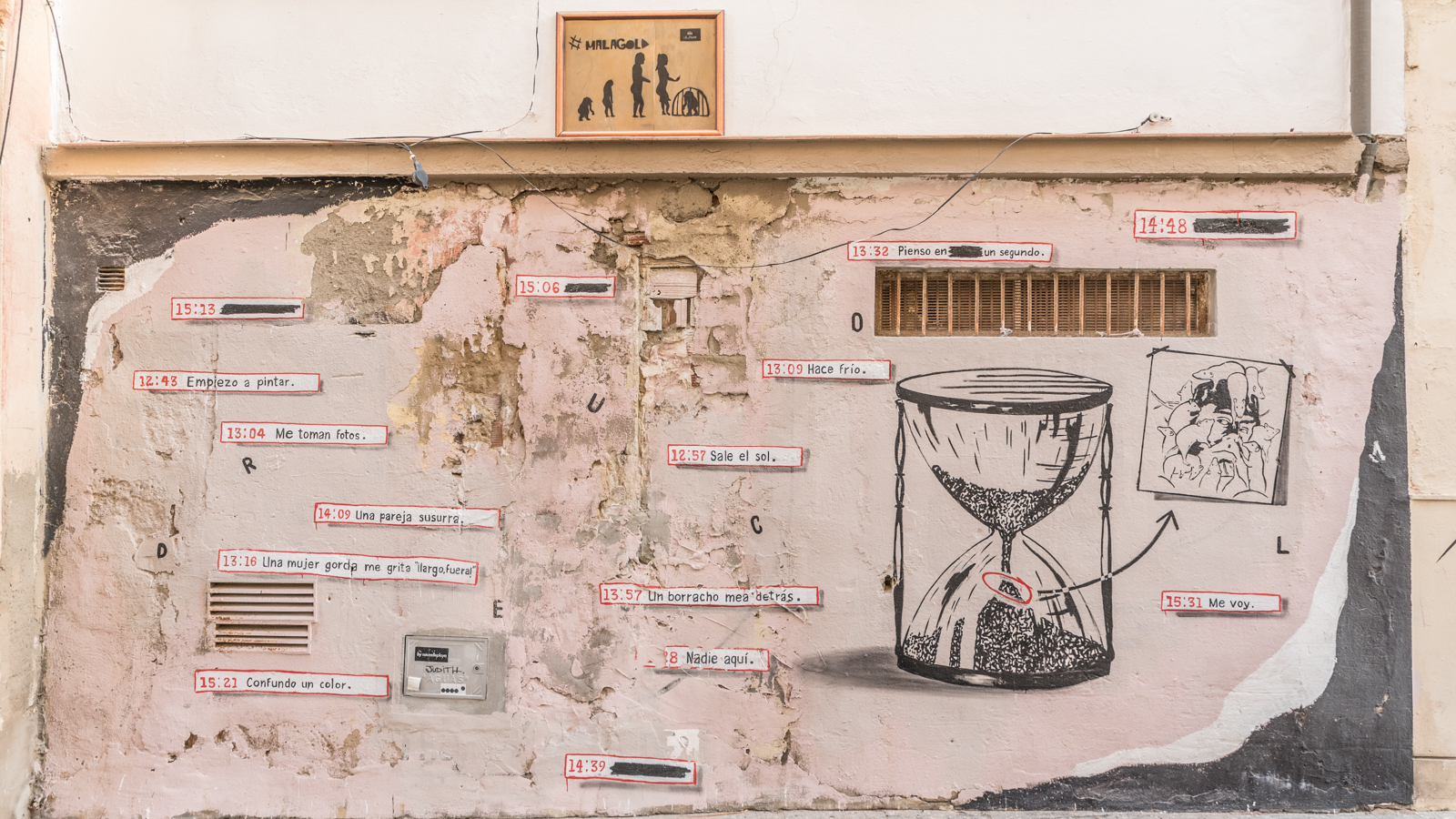 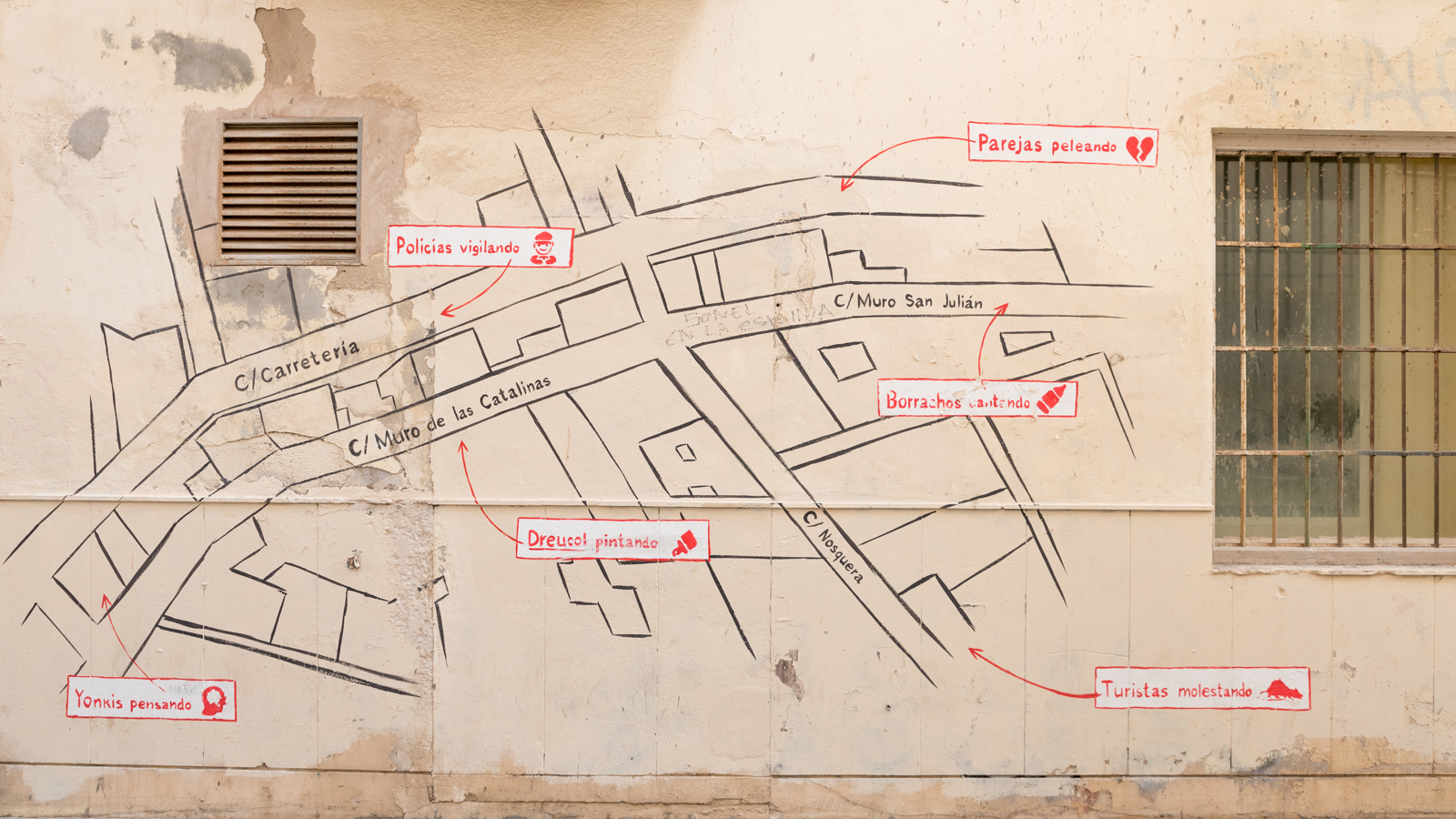 “The bigger you write your name, the more aware of the letters that make up it. This piece is about that; but instead of writing my name in large format, what I did was express the pattern writing process of it.” – Staggered Wall 2020

I would walk by this one every day during my allowed trips to the grocery store. It’s a recent work called “1 hour, 24 minutes and 3 seconds” and it’s painted on the wall of a former watch shop. 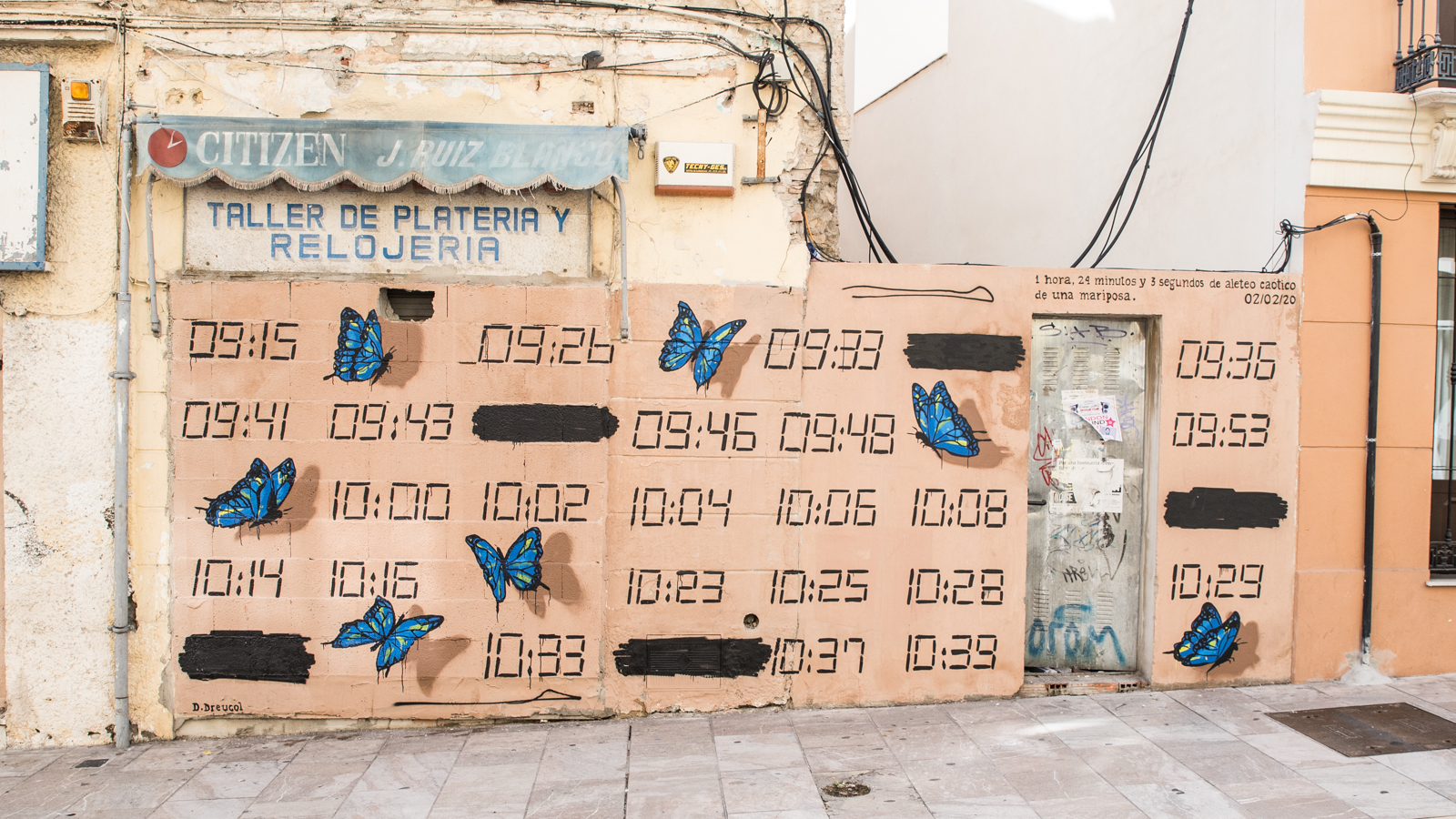 “I painted the exact time when I started painting every exact hour, left to right and from top to bottom; so that the painting revealed the concrete time it took to make it. On the other hand, I added the concept of Butterfly Effect, extracted from Chaos Theory. According to this, any small variation can have a greater effect in the medium or long term. What I thought was whether this painting, these chaotic butterflies, could ever generate any change somewhere; if this is worth anything. Probably not. But what if…”

Right next to this one is “Writing Exercises”, also done in 2020 and painted on the wall of a former bookshop. 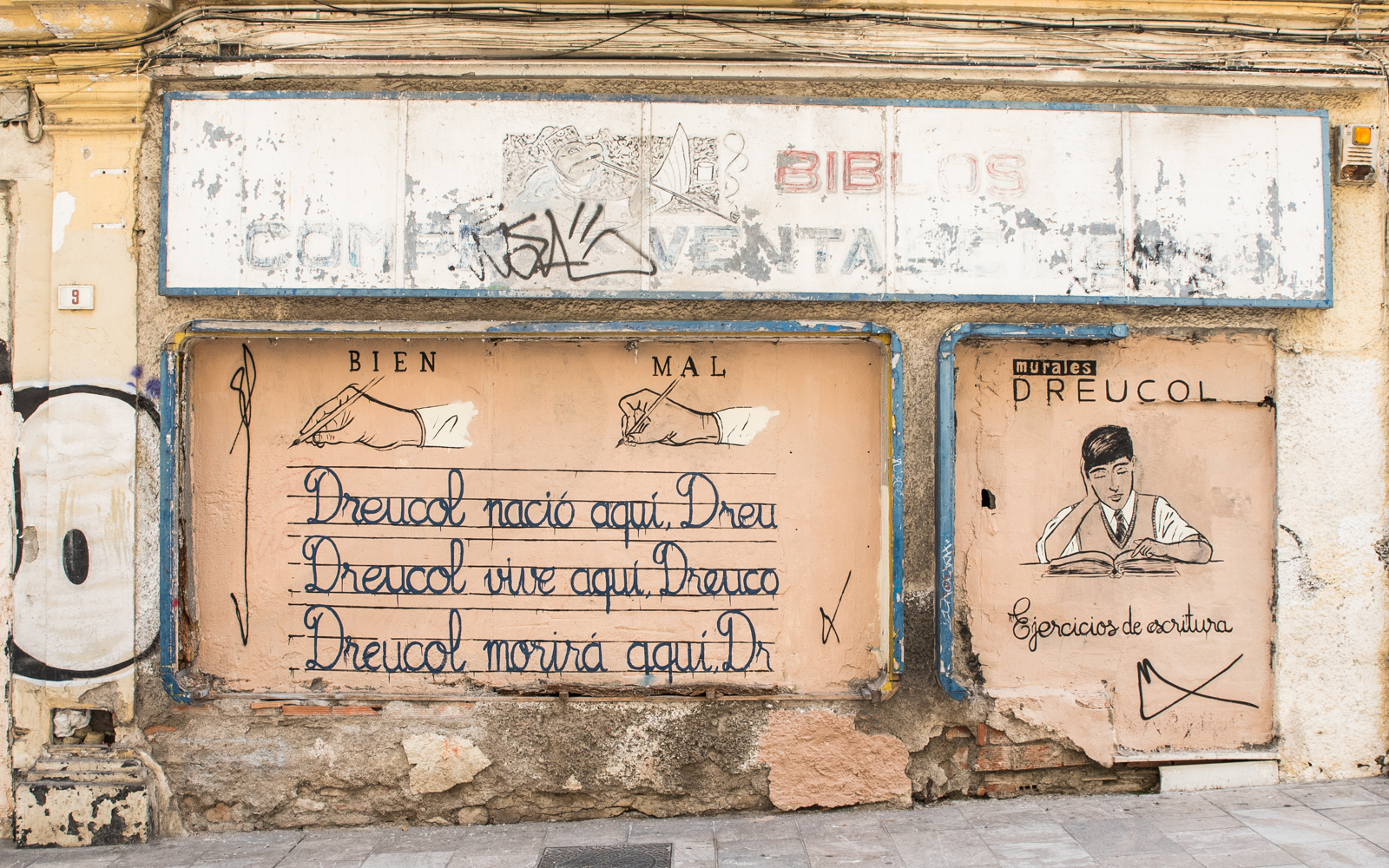 “When I write Dreucol I don’t mean a person, but the painting itself. I say he was born, that now lives and when the wall is knocked down or repainted, he will die. Just like the old man’s bookstore that occupied that same place died. I thought they probably sold the classic Blonde Notebooks they taught from calculus to calligraphy. Then I thought out some exercises to write my name as self-assertion of being nobody. And so it was.”

Bonus Art!
It somehow feels fitting that when I took a day-trip to photograph art in nearby Estepona that the first piece I would came across would be from Druecol. 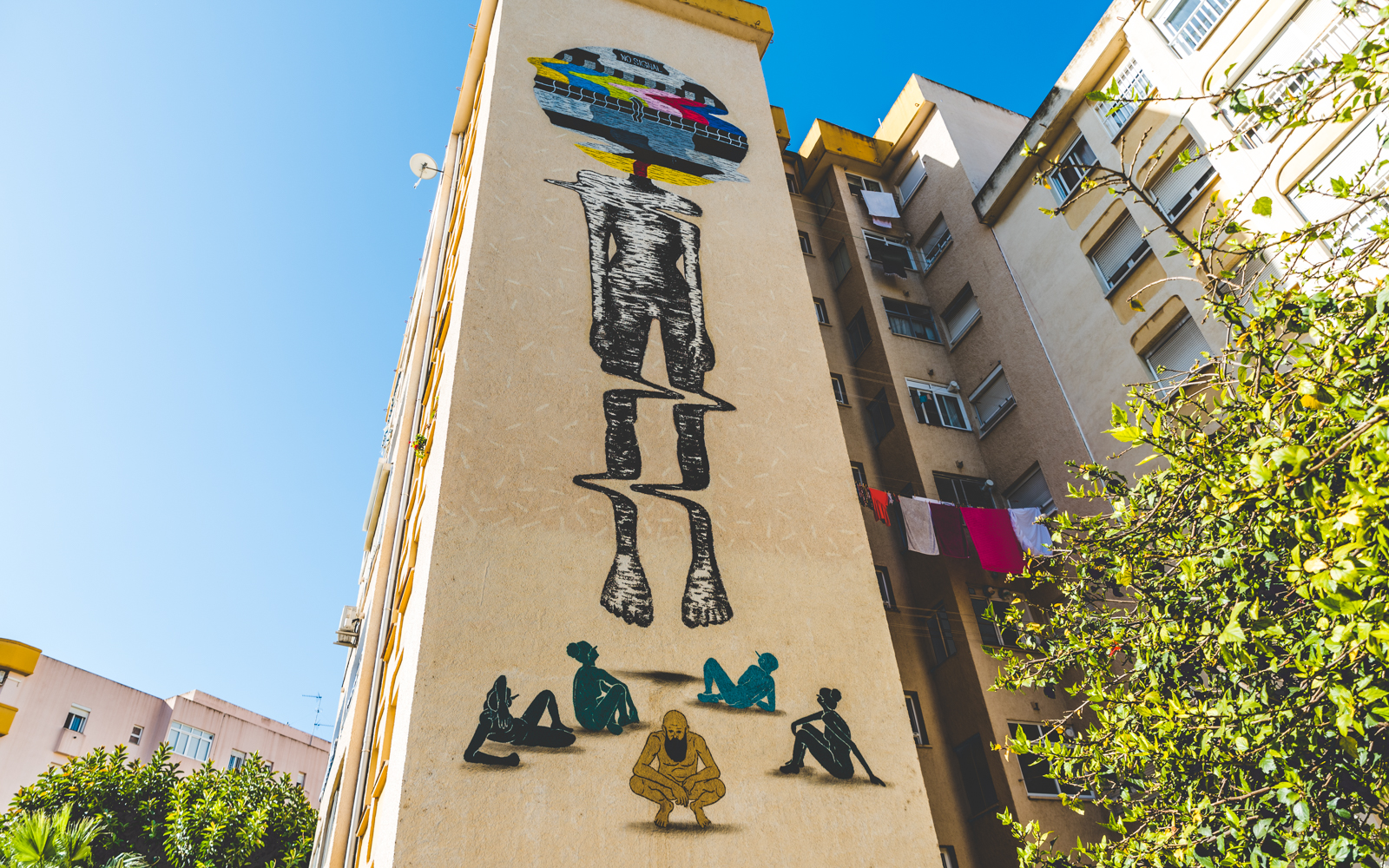