100 Nights of Summer: The Aerodrome Festival in the Sky 2018 Recap

The sixth festival of the season has brought me to the wide grassy plains outside of Prague for the Aerodrome Festival. This fest may be a newcomer to the Czech scene, but it’s already making waves with a three-day lineup of rock, pop, local bands, metal, and hip-hop.

As a music festival expert, it’s rare for a festival the size of Aerodrome to escape my notice. I came to discover that this used be a smaller single day fest focused on metal, and has recently expanded to a full weekend. Taking place at an airport outside of Prague, Aerodrome features plenty of room to stretch out, including camping and two main stages. 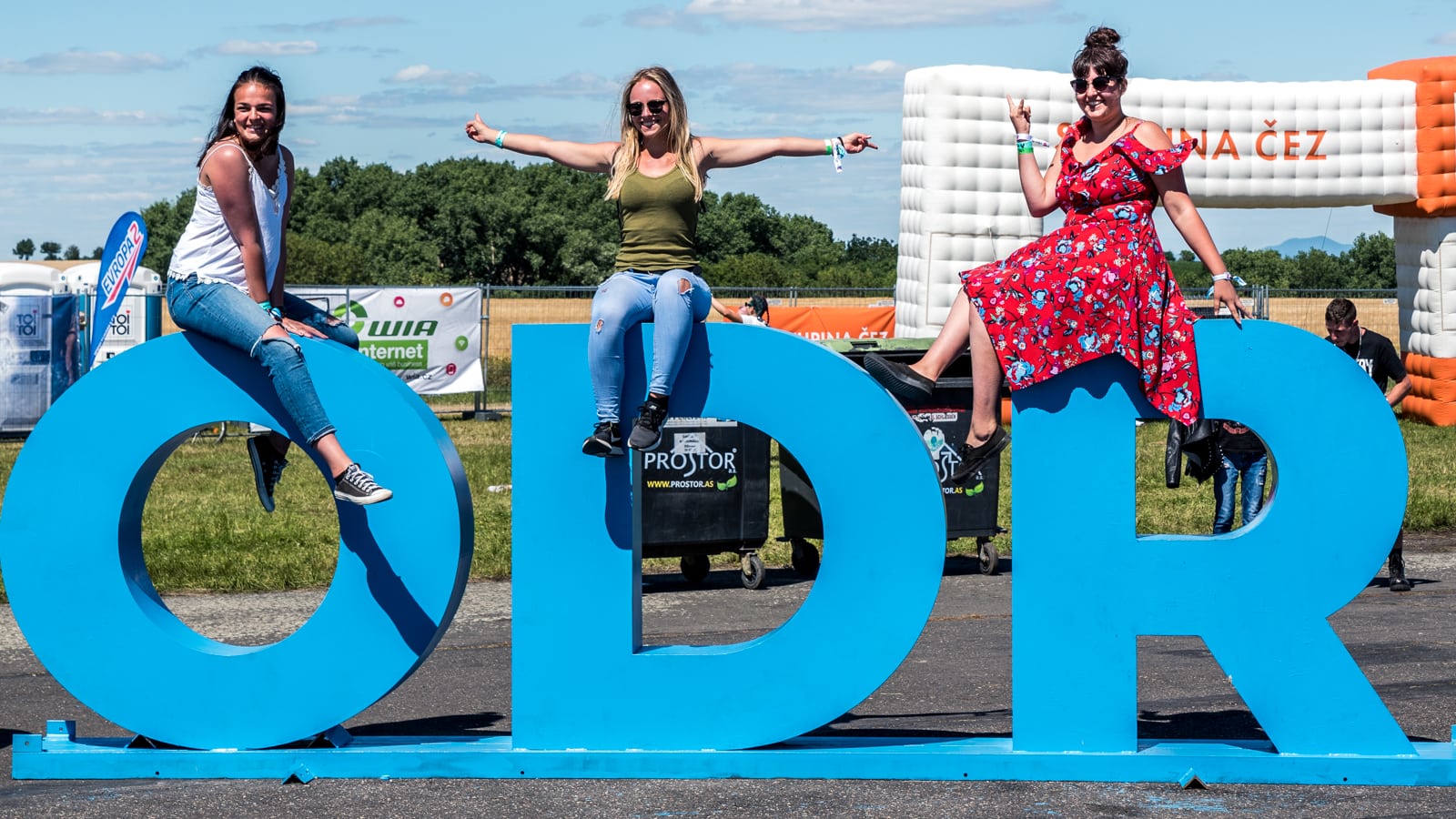 Festival of Flight and Fancy
Vacant airports around Europe commonly double as festival venues. They boast no complaining neighbors, flat spaces, and plenty of room to fit everyone — maybe too much room. Aerodrome could be a bit more condensed, with the walk from the bus to the first main stage well over a kilometer long hike. On the other hand, there’s plenty of room for cozy camping facilities and room to stretch out. 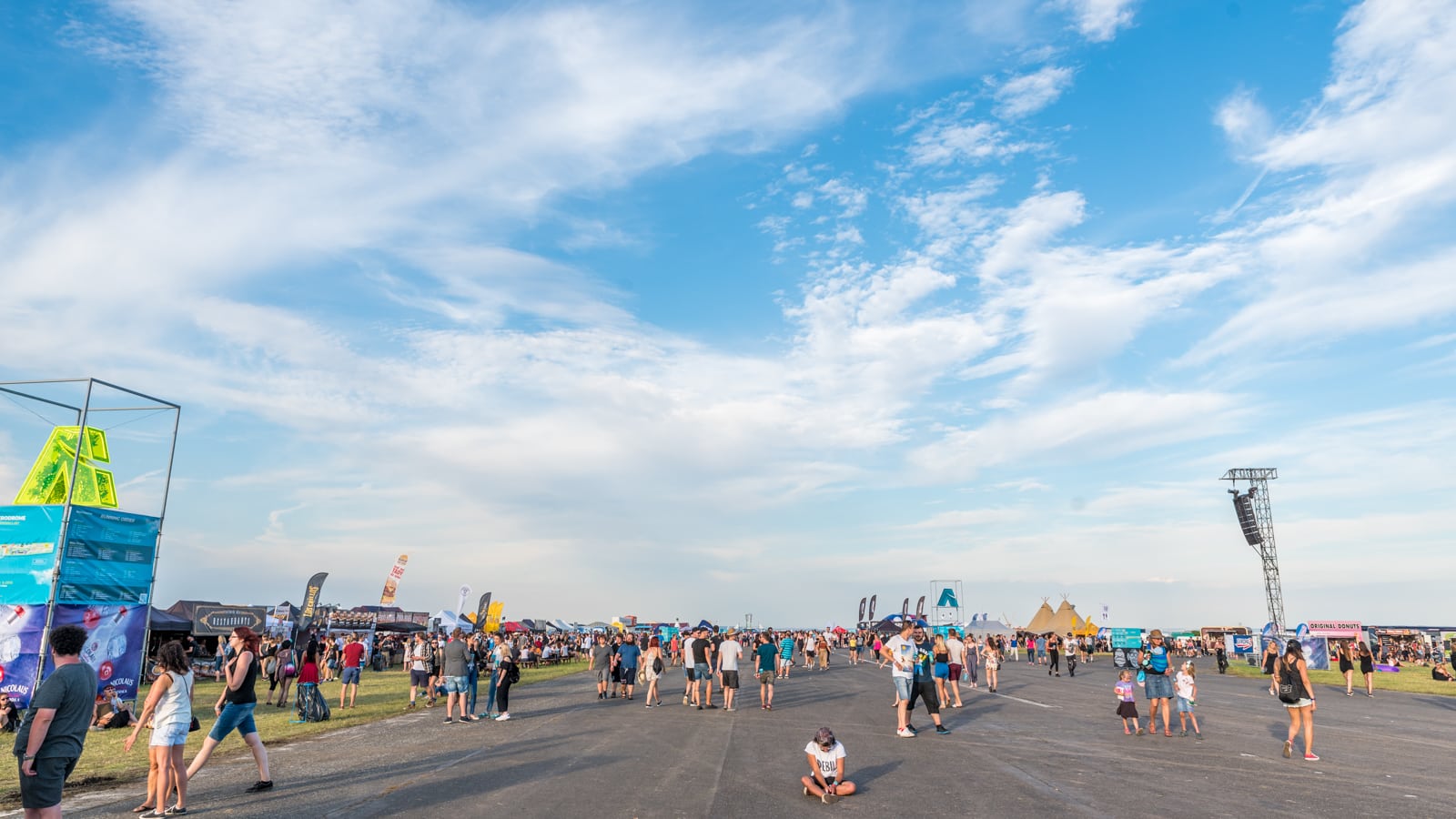 Something For Everyone
The layout of Aerodrome isn’t complicated. Two main stages rotate through eleven artists a day with no overlapping sets. One stage typically features more poppy bands like Glass Animals, Lana Del Rey, Macklemore, and Chvrches with the second stage pushing out harder sounds like Parkway Drive, Bullet for My Valentine, Body Count, and Hollywood Undead. There is also an excellent third stage featuring Czech bands. 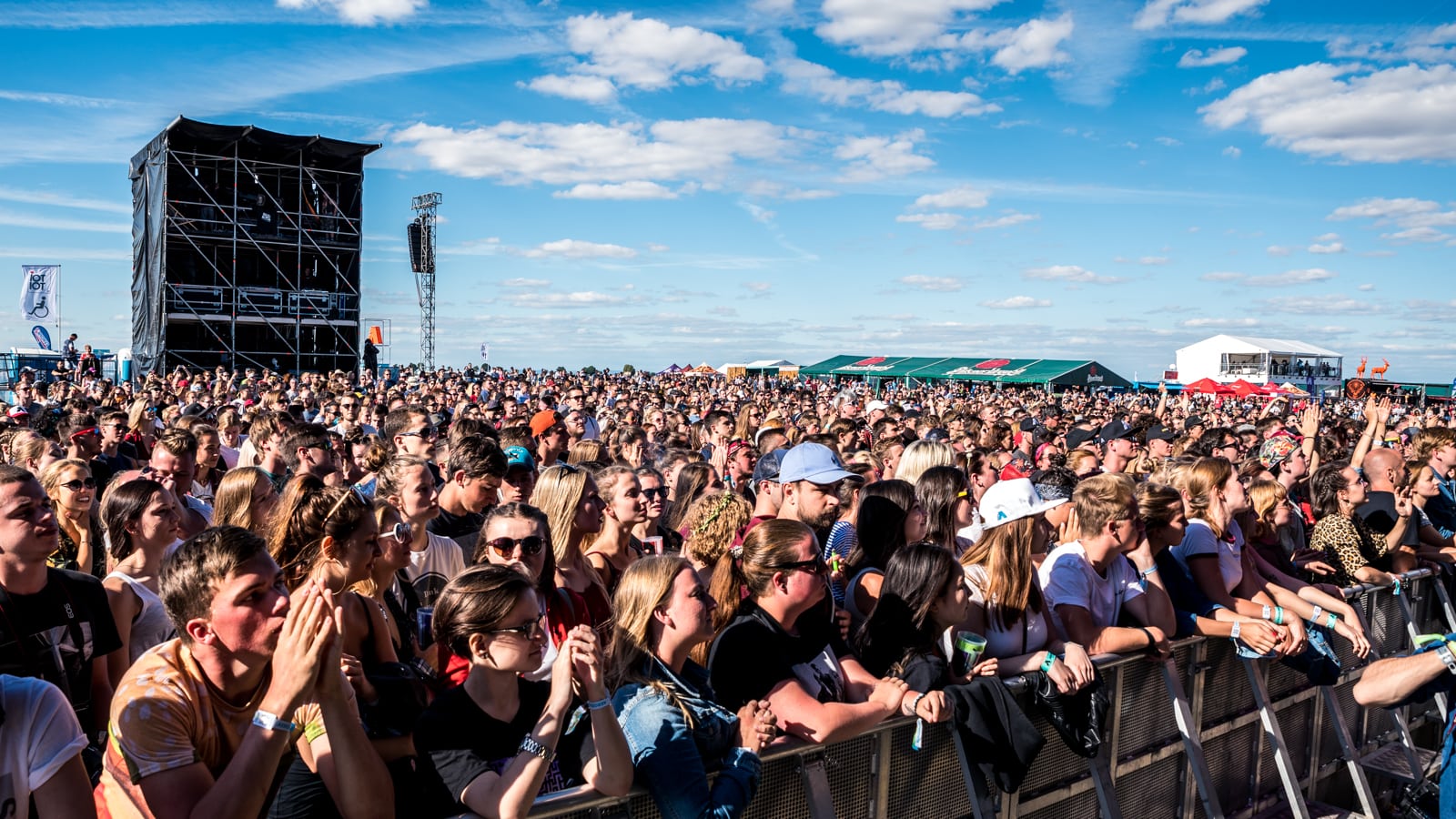 The Green Scene
Another festival of reusable cups. I’m officially declaring a trend. Aerodrome charged a small deposit, which was easy to recover at the end of the festival. Combined with a reduced cleaning crew, the massive airport grounds remained spotless for the weekend. I was a bit disappointed with some of my fellow campers, although the messes they left behind paled to what I’ve seen at some of the larger German, Austrian, and Swiss festivals.

What I Didn’t Like
Like many festivals jumping from one day to a full weekend, Aerodrome suffered from some growing pains. The transportation from Prague was far from adequate (more on that below), which could have led to some of the smaller than expected crowds. They also used a cashless system which caused far more headaches than I wanted — I never found a station that accepted credit cards, which meant I still needed to bring cash to a cashless festival.

Nine Inch Nails
This will by by far one of my top 10 sets of the summer with crowd-pleasers like “I’m Afraid of Americans” and “Head Like a Hole”. Arriving early to secure a spot, I met a Hungarian girl that had traveled all day by train only to see this show. Then I met a Slovakian kid who had done the same thing, and then we all met two Austrian brothers who had, well, you know the story by now. So that’s how I enjoyed NIN, surrounded by superfans from around the world. 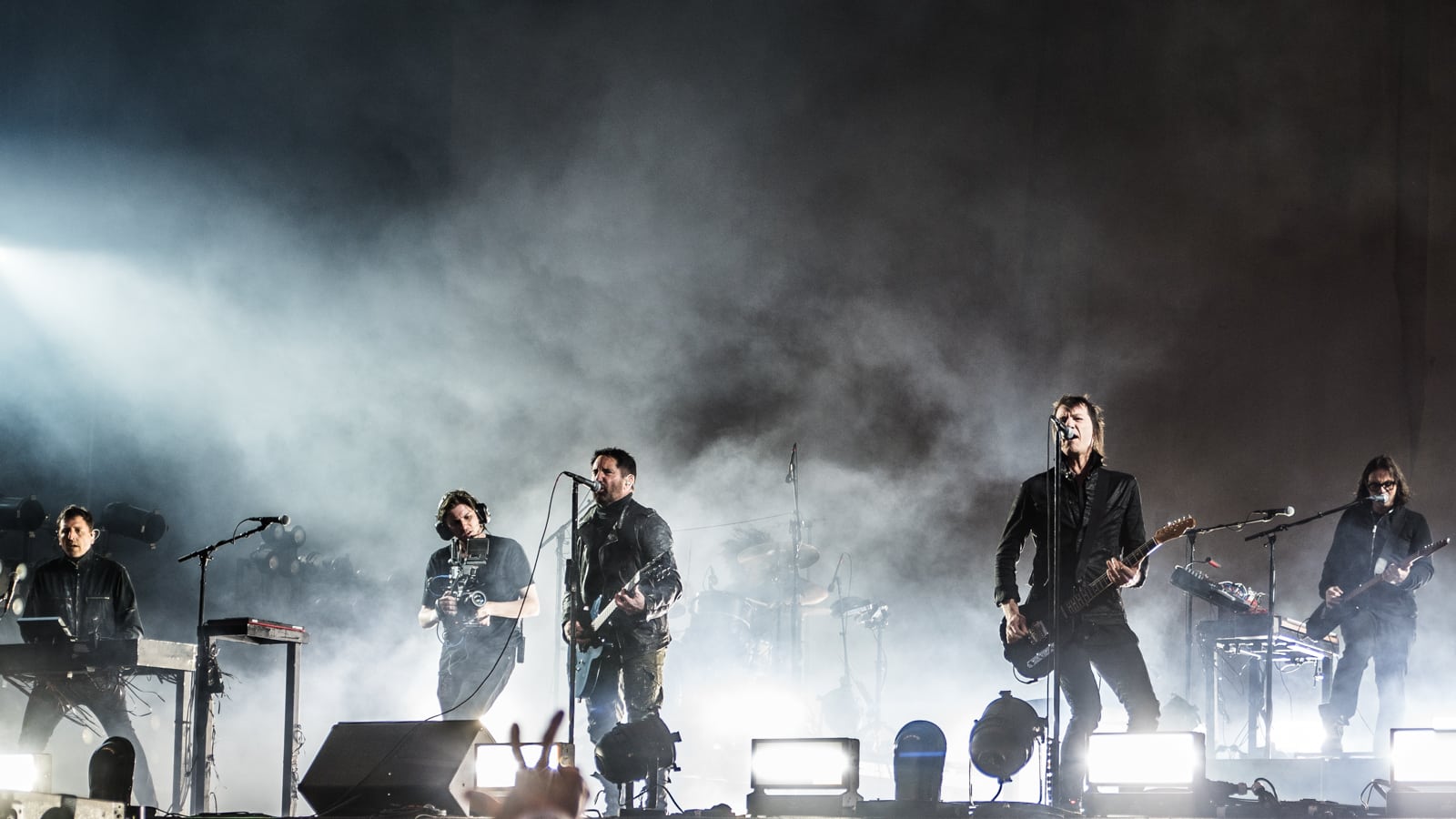 Portugal. the Man
Nine years ago, almost to the day, I entered my first photo pit officially covering my first fest for Music Festival Wizard. And that first band that I shot at Bonnaroo 2009 was Portugal. the Man. You might call them the musical spirit artist of our website, or as Beavis and Butthead say during their introduction to the band:

“This does suck, but this sucks so hard that it sucked a hole through the dimensional wall into awesomeness. When you compress this much crap under the force of this much pretension, you create a beautiful diamond. This is the greatest band that has ever walked the Earth, but they do not walk the Earth, they float above it, for they are as Gods. They are better than The Beatles, better than The Rolling Stones, better than Silverchair, almost as good as Pantera. They are our rightful lords and masters. Ladies and gentlemen, bow down to the greatest band in the world, Portugal. The Man.” 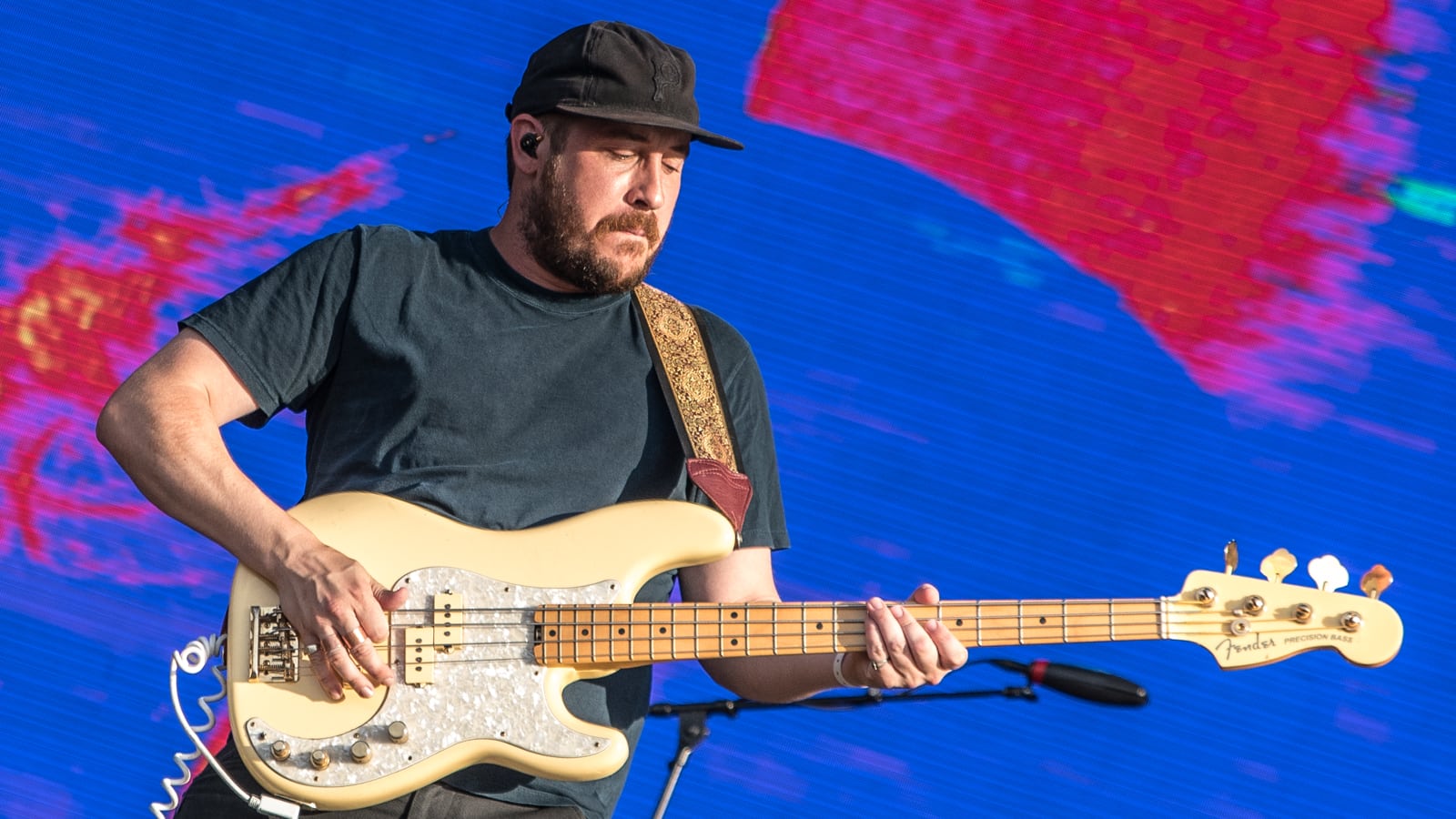 Frank Carter & The Rattlesnakes
Opening the last day of a festival at two in the afternoon is never easy or fun — unless you’re Frank Carter. Festies lounging in the sun found themselves berated to join the party, with Carter himself jumping immediately into the crowd, skipping rope, taking selfies, and crowd-surfing his way into Czech hearts.

Body Count Featuring Ice-T
My second least favorite moment of the festival: Ice-T shaking out his water bottle into my mouth and eyes, then having to hear his bizarre rant about the “pussification” of men. This from the guy who once starred in a movie as a fucking kangaroo. 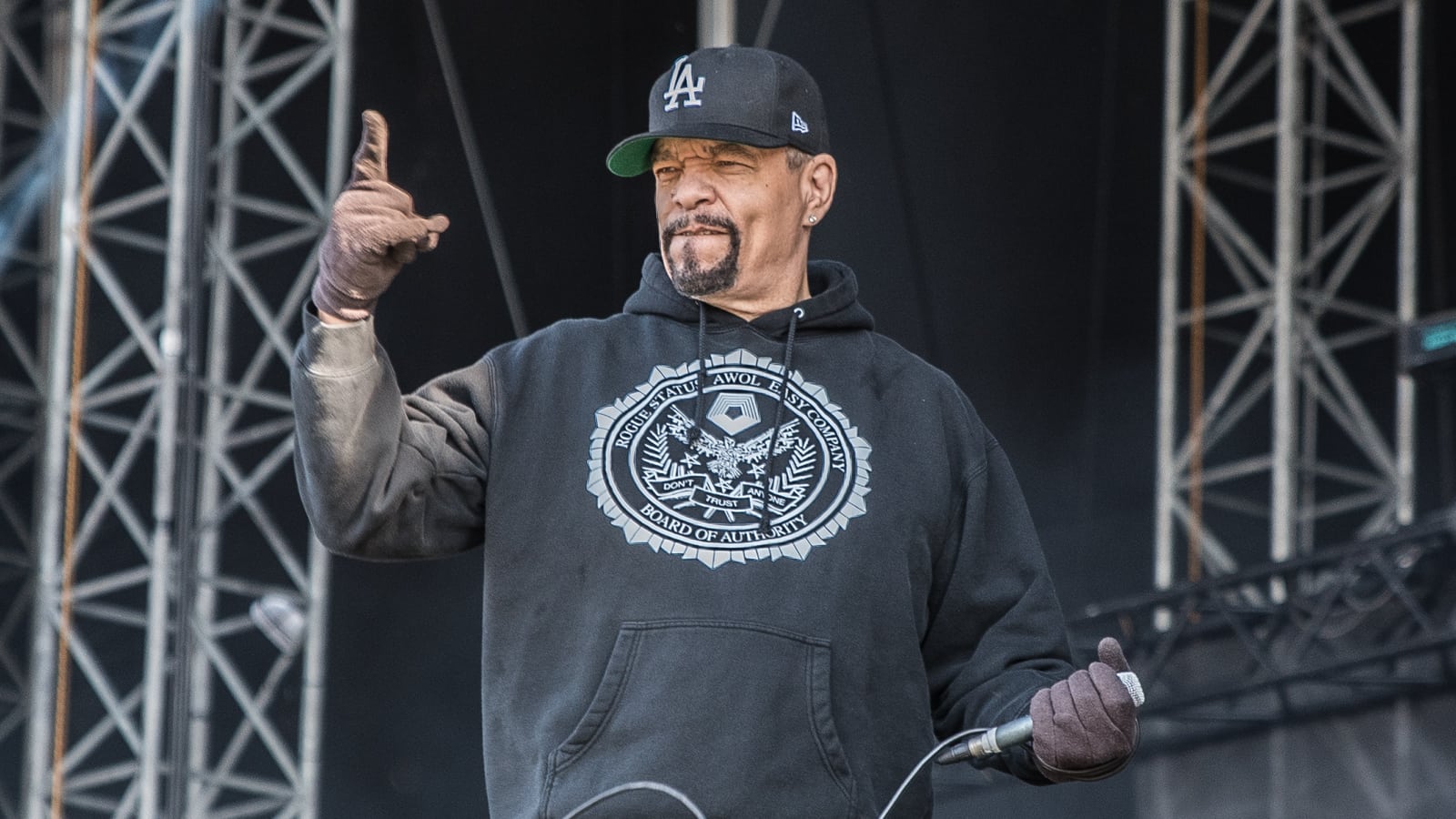 Limp Bizket
We thought we could walk over to the bathrooms without suffering the aural infection that is Limp Bizket, but no, Fred Durst caught us with his cover of George Michael’s “Faith”. Dressed like he lost a bet, with a not-Yankees hat and flowered pants, Limp Bizket has moved on to murdering other covers like Nirvana, or as one of the Austrian brothers put it: “Just when I thought I couldn’t hate Limp Bizket anymore, they have now killed Nirvana for me.”

The Kills
If you put The Kills on a lineup, then I’m probably going to be there — it’s how I planned the first half of 100 Nights of Summer chasing around Alison Mosshart and Jamie Hince. 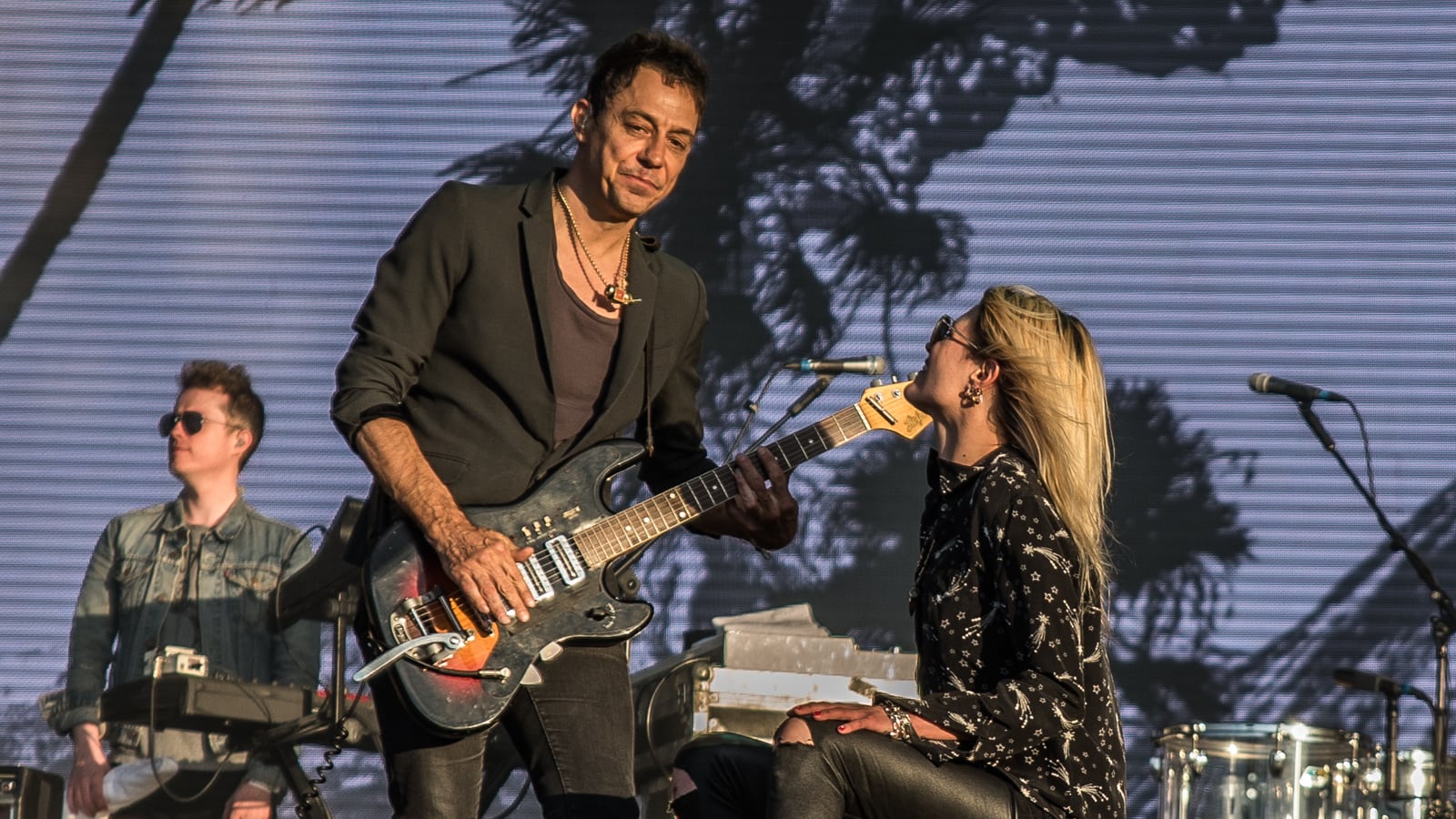 MØ
Danish singer MØ, is an expressive performer who likes to climb into the crowd. Also, I don’t have my long range lens, so I really appreciate her coming down to my level to pose. 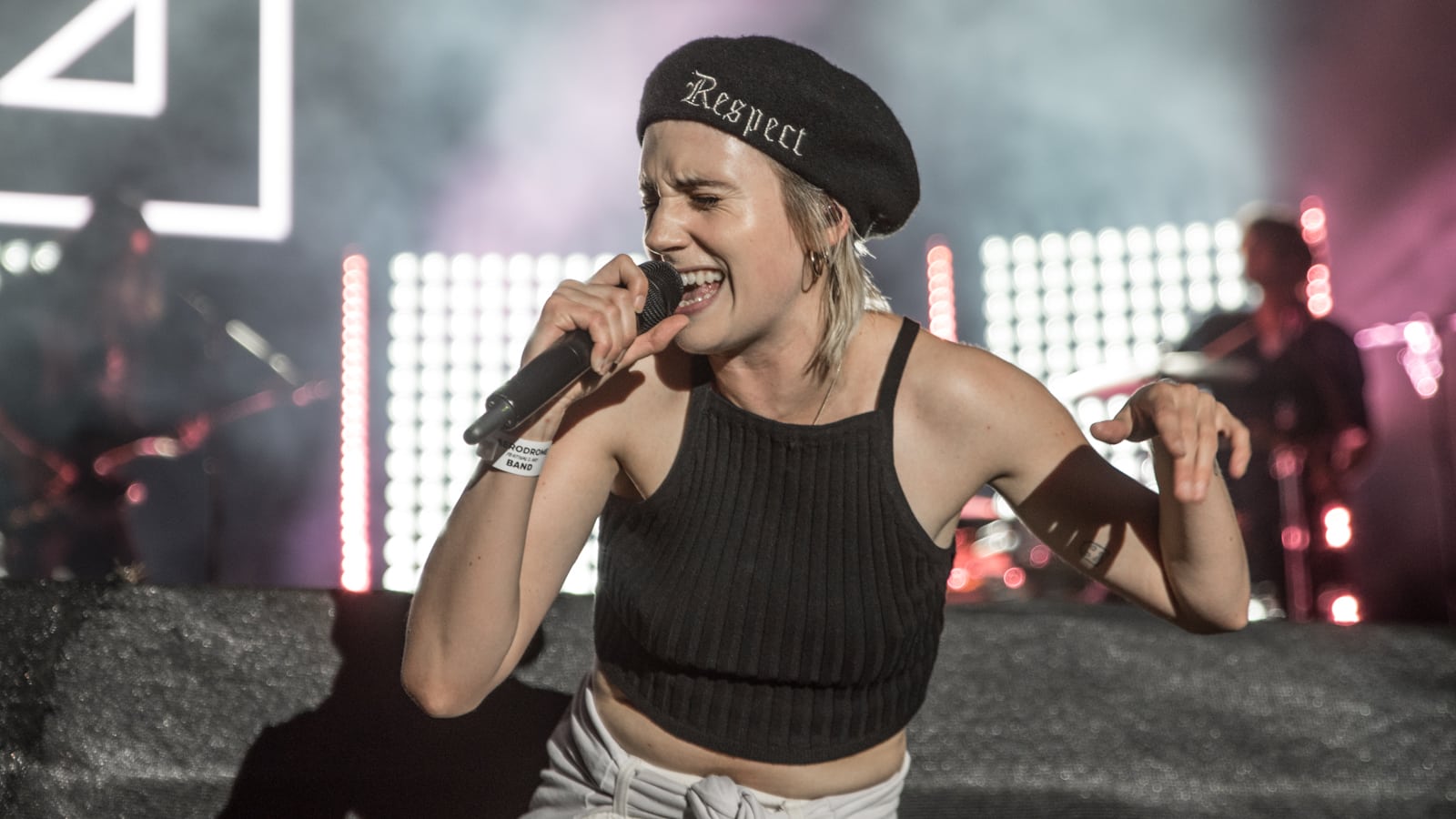 Gear of the Week: Klymit Sleeping Pad
After four years, I still can’t get over how comfortable and compact, this Klymit Static V2 sleeping pad has been. It takes only eight breaths and is strong enough to use just about anywhere. Stay tuned for the full review coming soon. 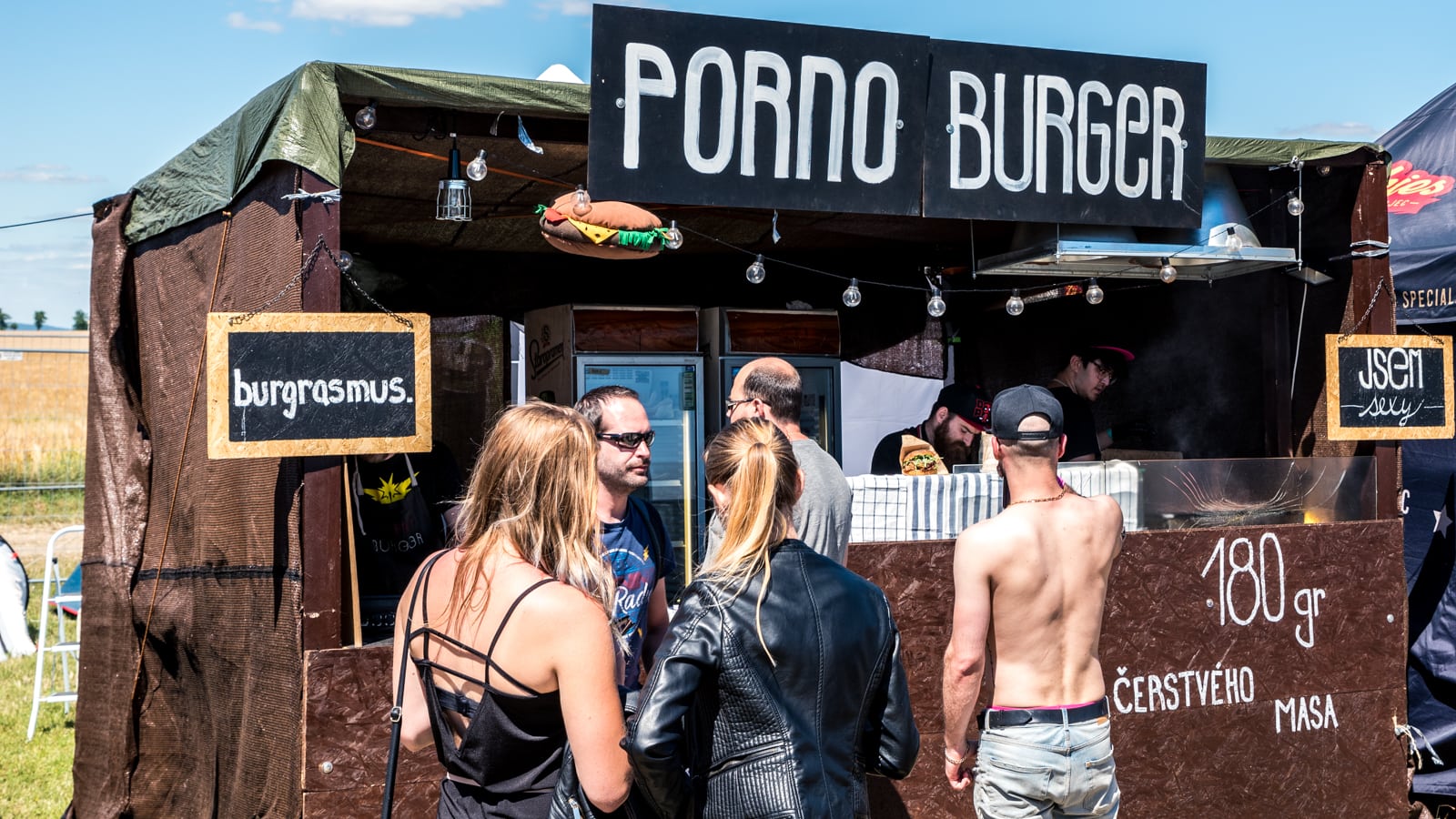 How To Chill
This dude doesn’t need your fancy inflatable sleeping pads, just four beers, and his smuggled in vodka fruit punch, along with the soft, cozy incline of a plastic cord protector. 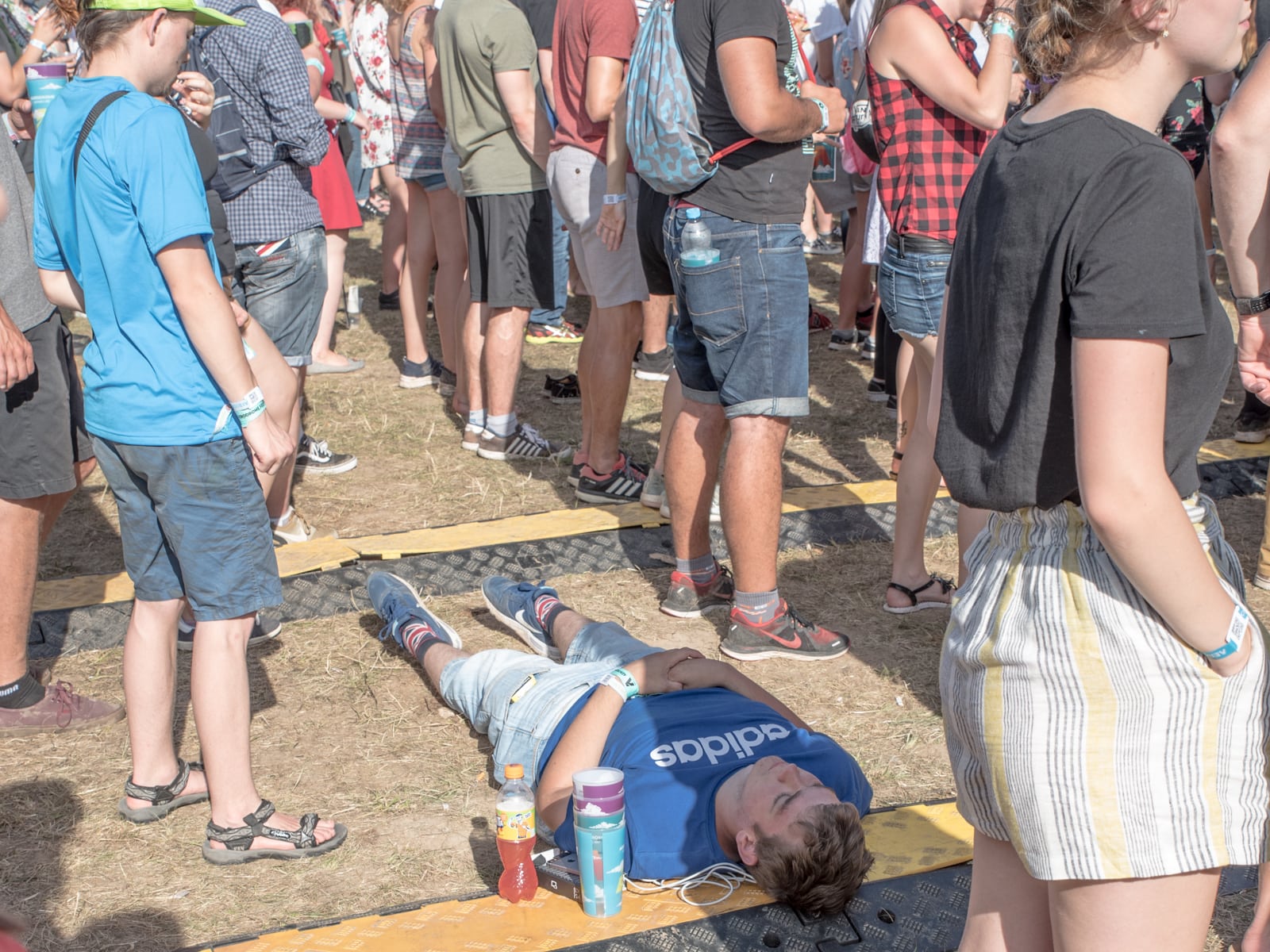 Where Did You Sleep?
I camped all three nights. It’s not included in the price of the ticket so expect to pay about $30 USD for the weekend. It’s an airport, so no shade, but every spot is covered in soft grass (no rocks!) and flat. Showers were mostly warm with no stalls, and Czech dudes are not shy about letting it all hang out. 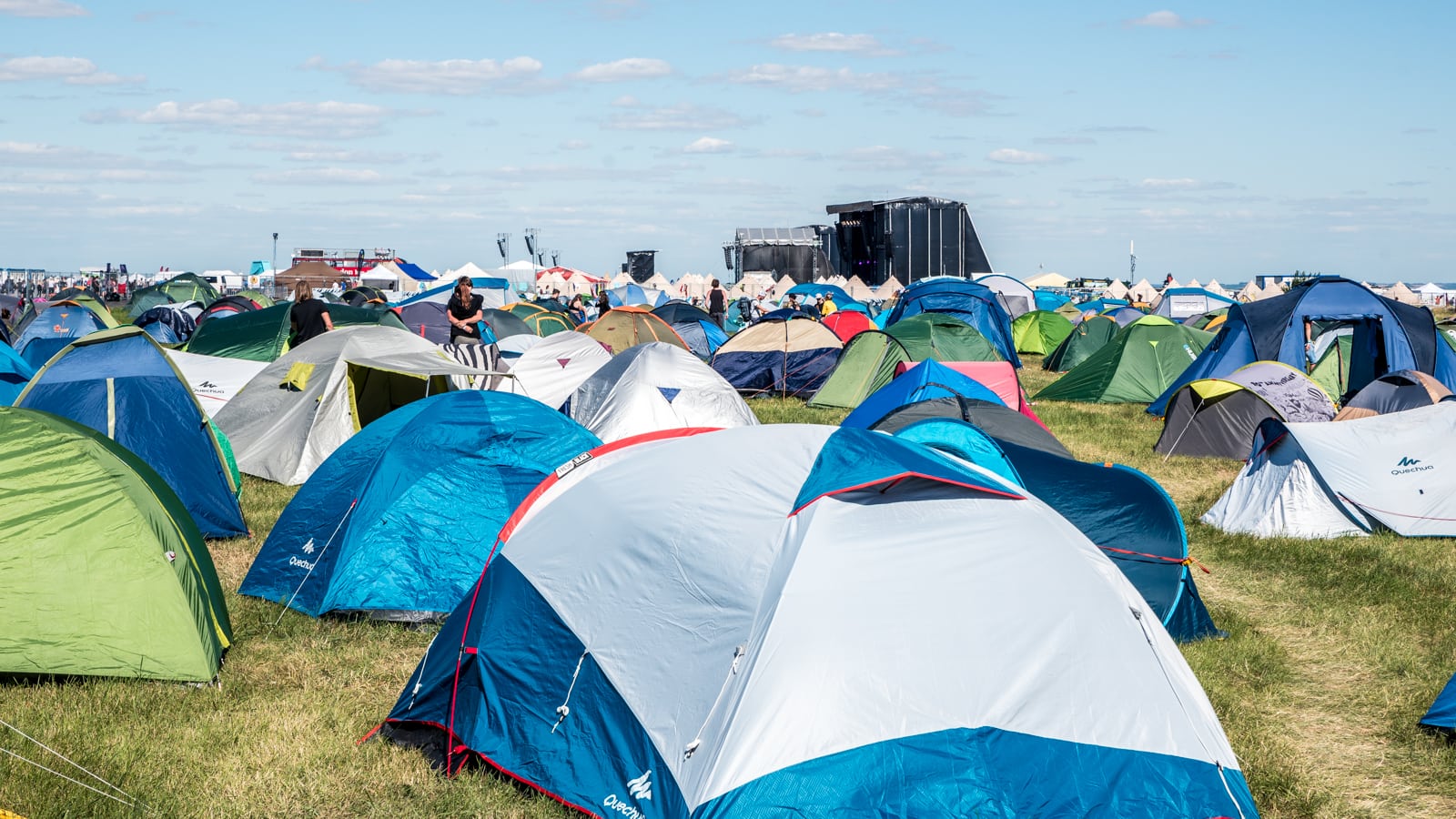 How Did You Get Around?
I believe Aerodrome could have pulled in more people with better transportation. By car, my friends said it took them an hour to get to the festival. I took a twenty minute subway ride to the edge of the city to a bus that required a reservation (which I didn’t have), and a drop-off point that was ten minutes away from the entrance to camping making my travel time about two hours. Coming home took me closer to three hours (there weren’t enough buses). If you go to this festival for a weekend, you should absolutely camp — it is not easy to get back and forth to Prague.

How Did You Get There?
I took an overnight Bahn ferry/bus combo ($24 USD/7 hours) from Copenhagen to Berlin. After spending a night there, I caught a ride on the excellent Student Agency bus ($18 USD/4.5 hours) straight to Prague. Czech is centrally located in Europe, so there’s a slew of options when it comes to transportation. You will have no issues getting here.

Czech doesn’t feature too many mainstream festivals, especially none of this size, so I’m really hoping to see Aerodrome catch on. The lineup along with the camping really sold me on this festival, and if they can work out some of the minor issues, Aerodrome could be a major player during the European summer. 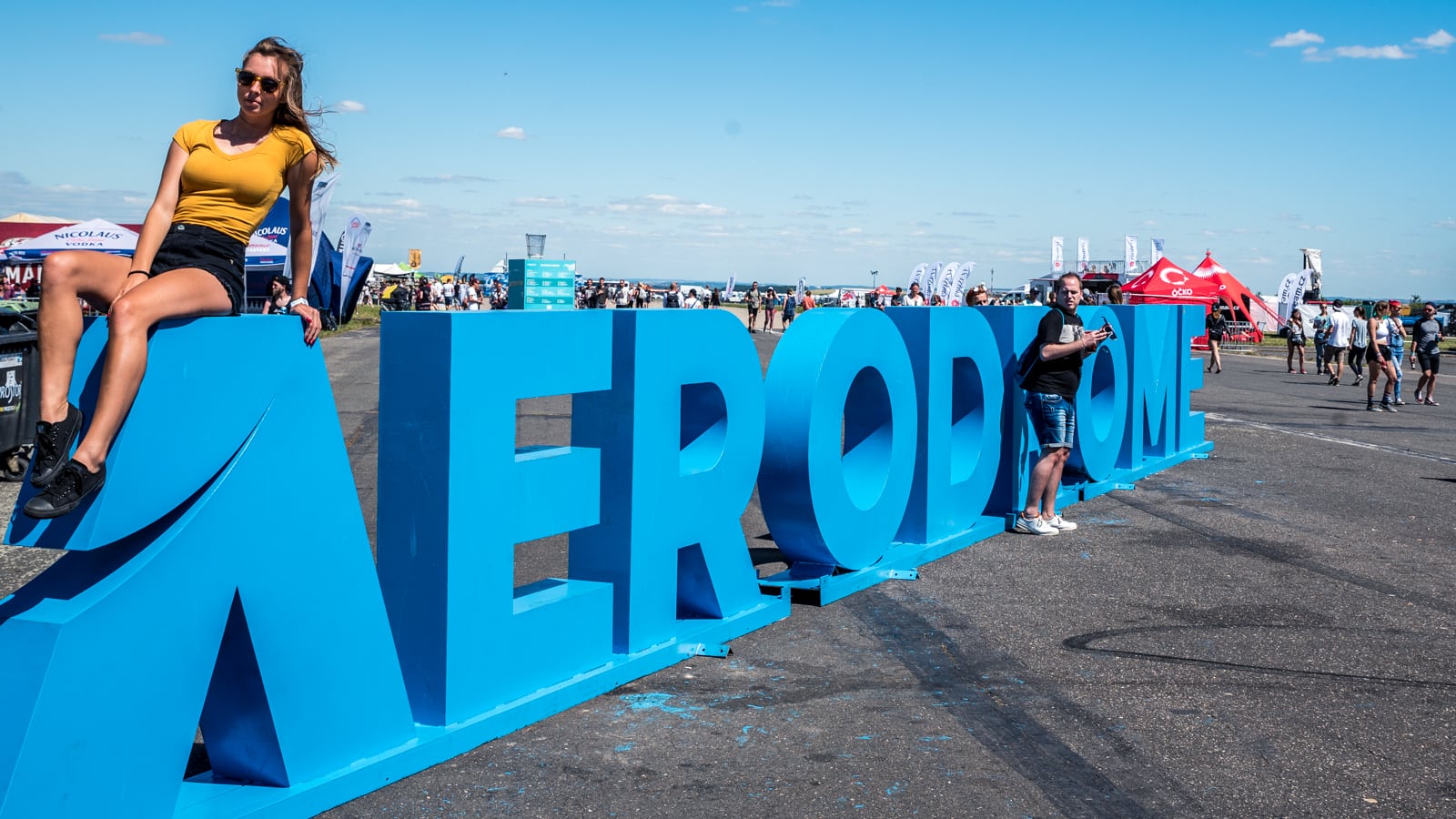