Welcome to Day #7 of 100 Days of Travel. It’s a new world and a new type of traveling. For the next 100 days, I’m exploring Macedonia as safely as possible. Markovi Kuli is a short hike, but well worth it for the dramatic views of the landscape, 360-degree views of the Pelagonia valley, and exploring the castle ruins. 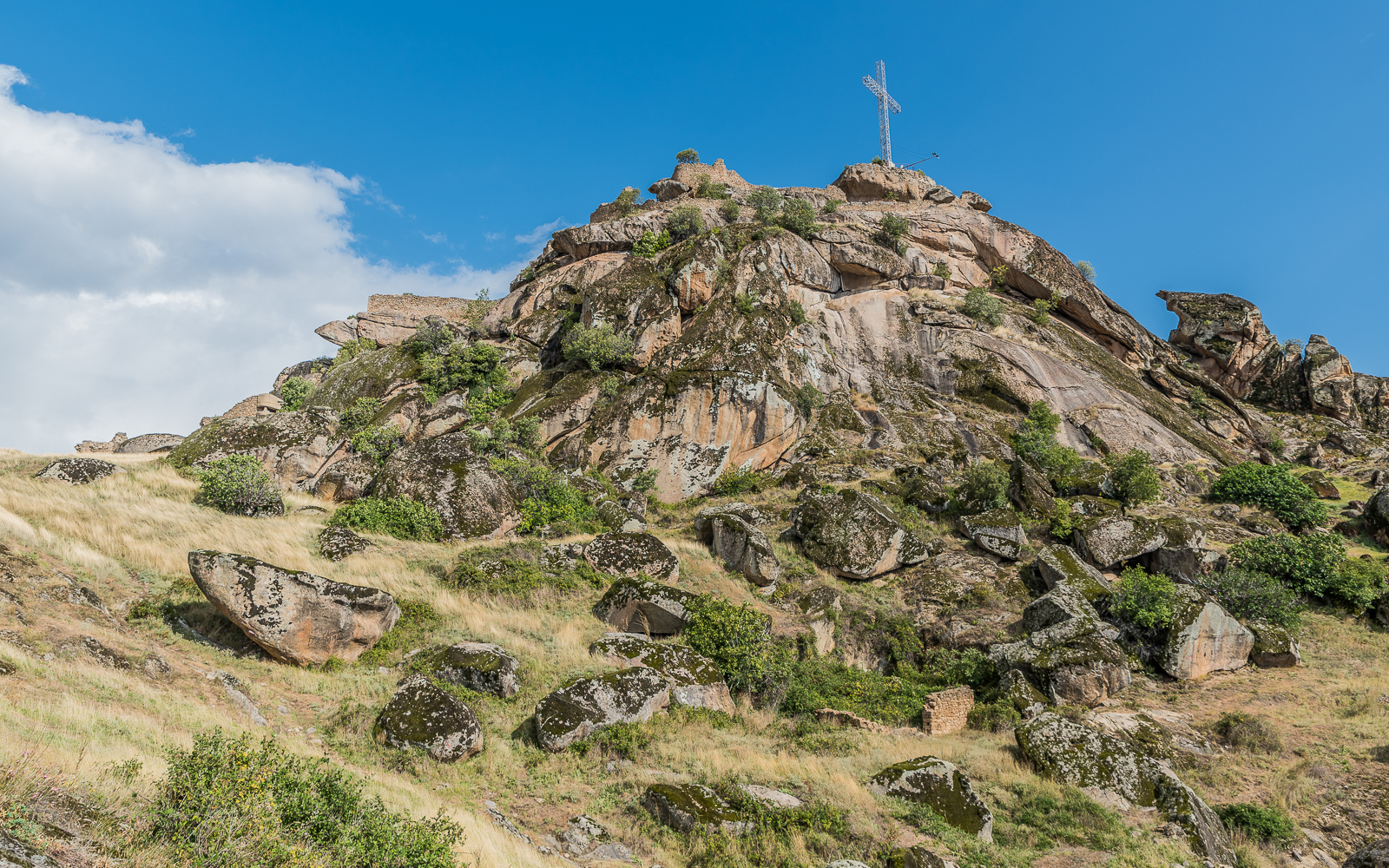 Marko Mrnjavčević, a vassal king under the Ottoman Empire, has reams of historically accurate accounts. Then there are the stories of the legendary Prince Marko, a hero of Serbian folklore who sported a black mustache the size of a six-month-old lamb and wore a shaggy wolf-pelt for his coat. His weapon of a choice? A massive 85-kilogram mace, so heavy that he had to wear an equally weighted wineskin on his right side for balance (Marko is as legendary for his drinking as he is for his courageous feats). He lived to be 300 years old and rode a talking horse that drank. In both fact and fiction, these towers were his home. 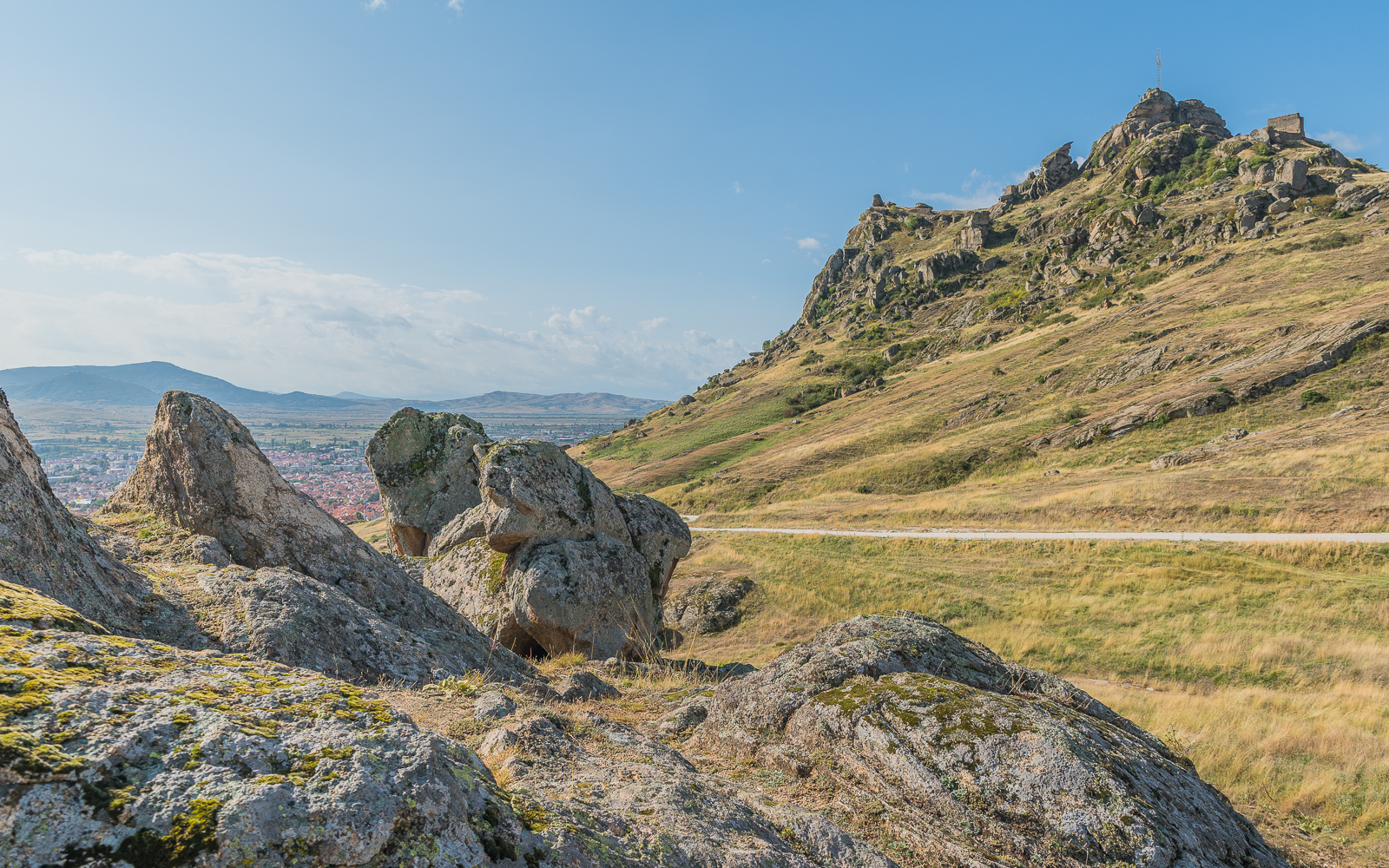 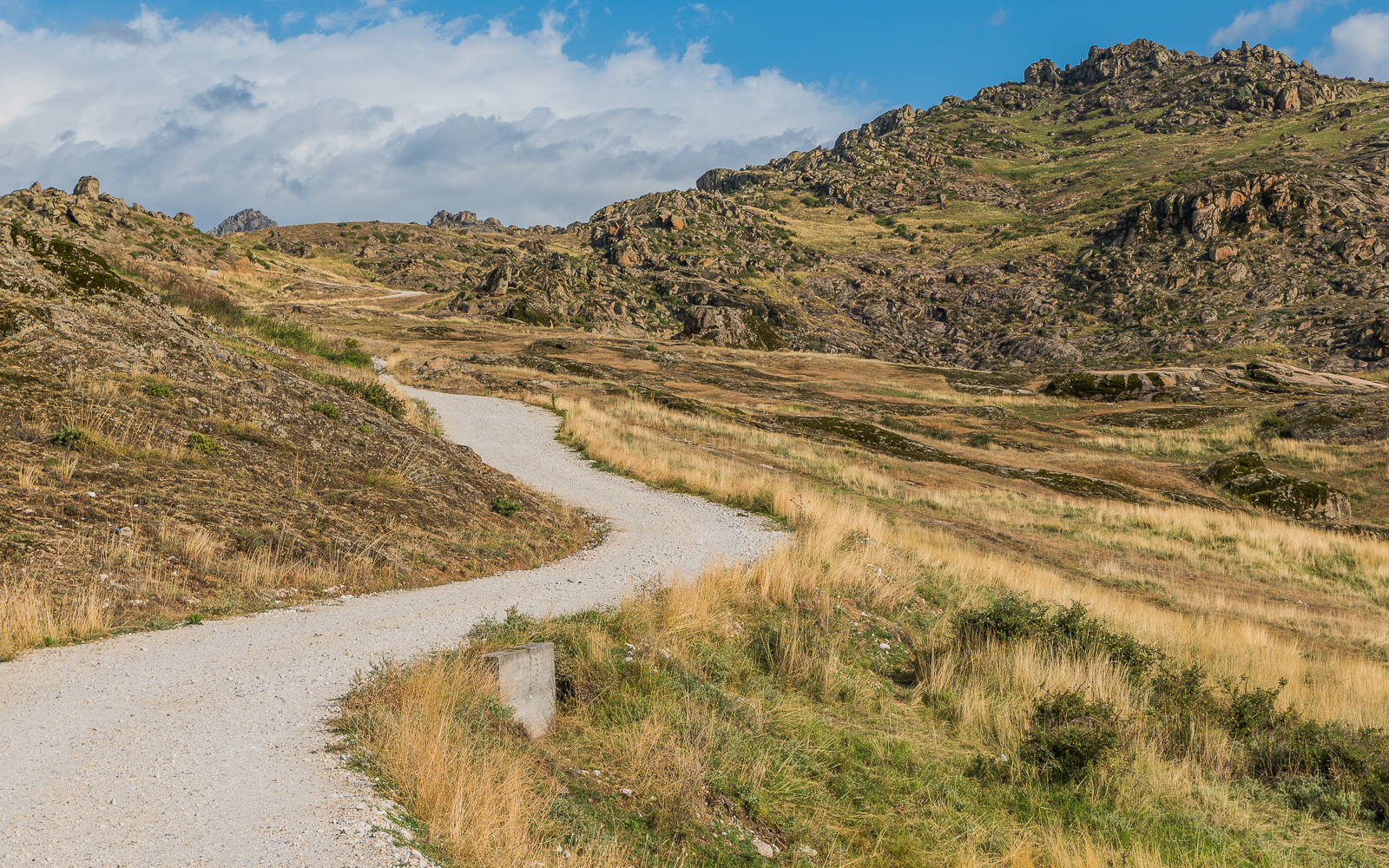 You can see Marko’s Towers and the iconic cross atop the summit from everywhere in the city. There’s a road with a few parking spots as well. 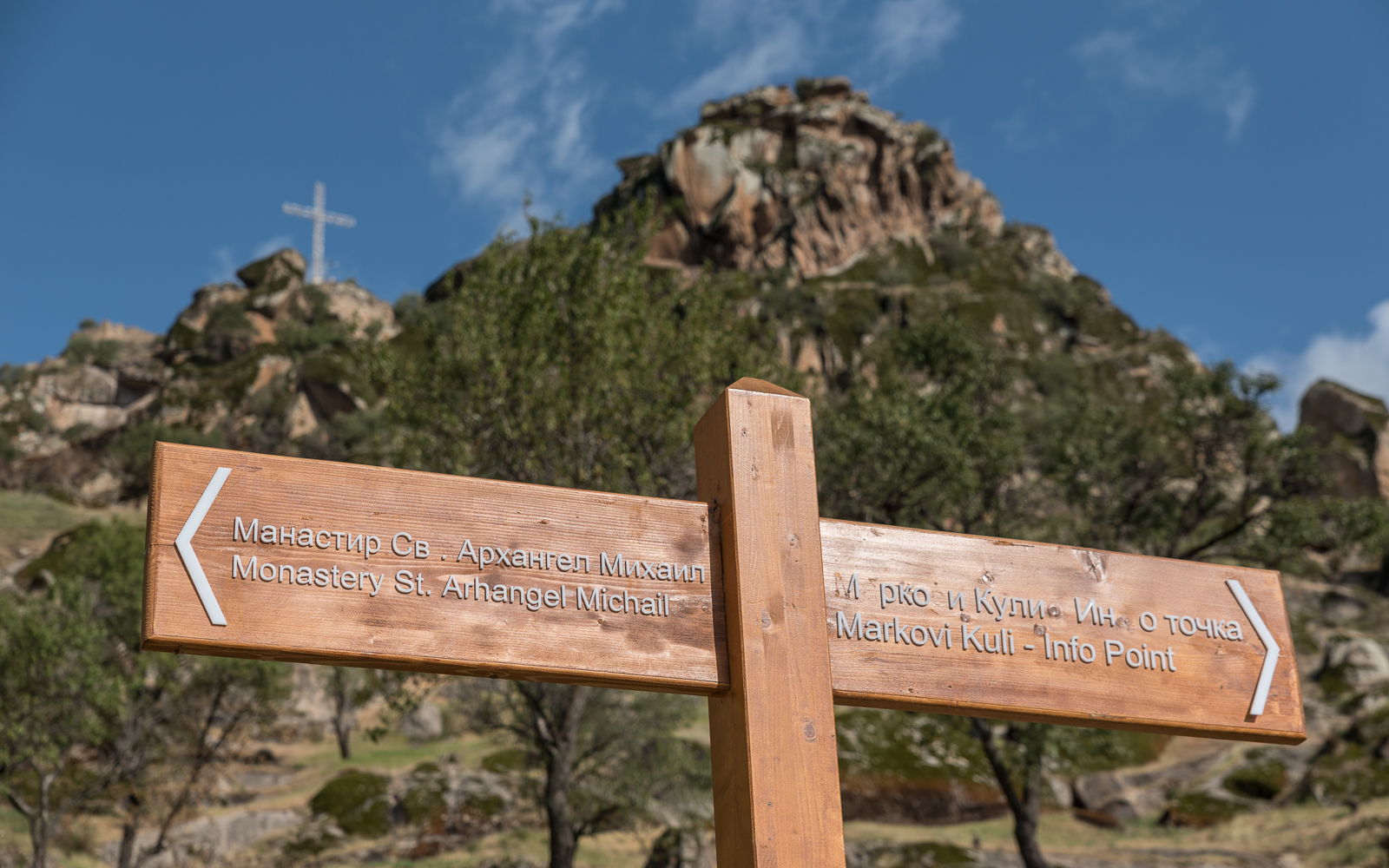 Photo Quick Tip: There are hundreds of electrical wires strung up all over the city, frequently blocking your epic shots of Marko’s Towers. Bide your time until you reach the trailhead and you will be rewarded with clutter-free views. 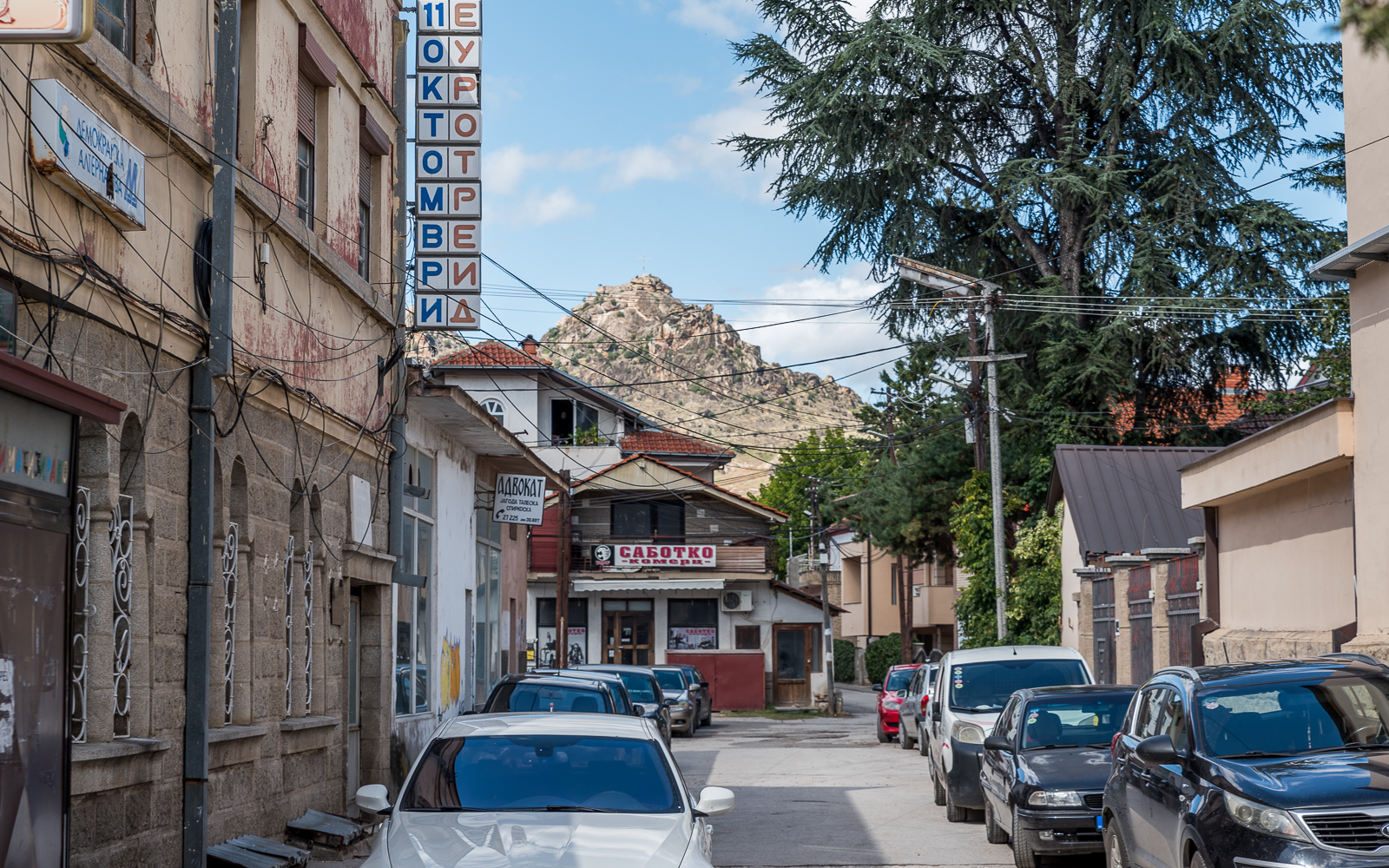 The official route here is a meandering road that climbs up Markovi Kuli. It’s also the route to the Mother of God monastery, a much longer hike in the area (about five hours), and well worth the effort. 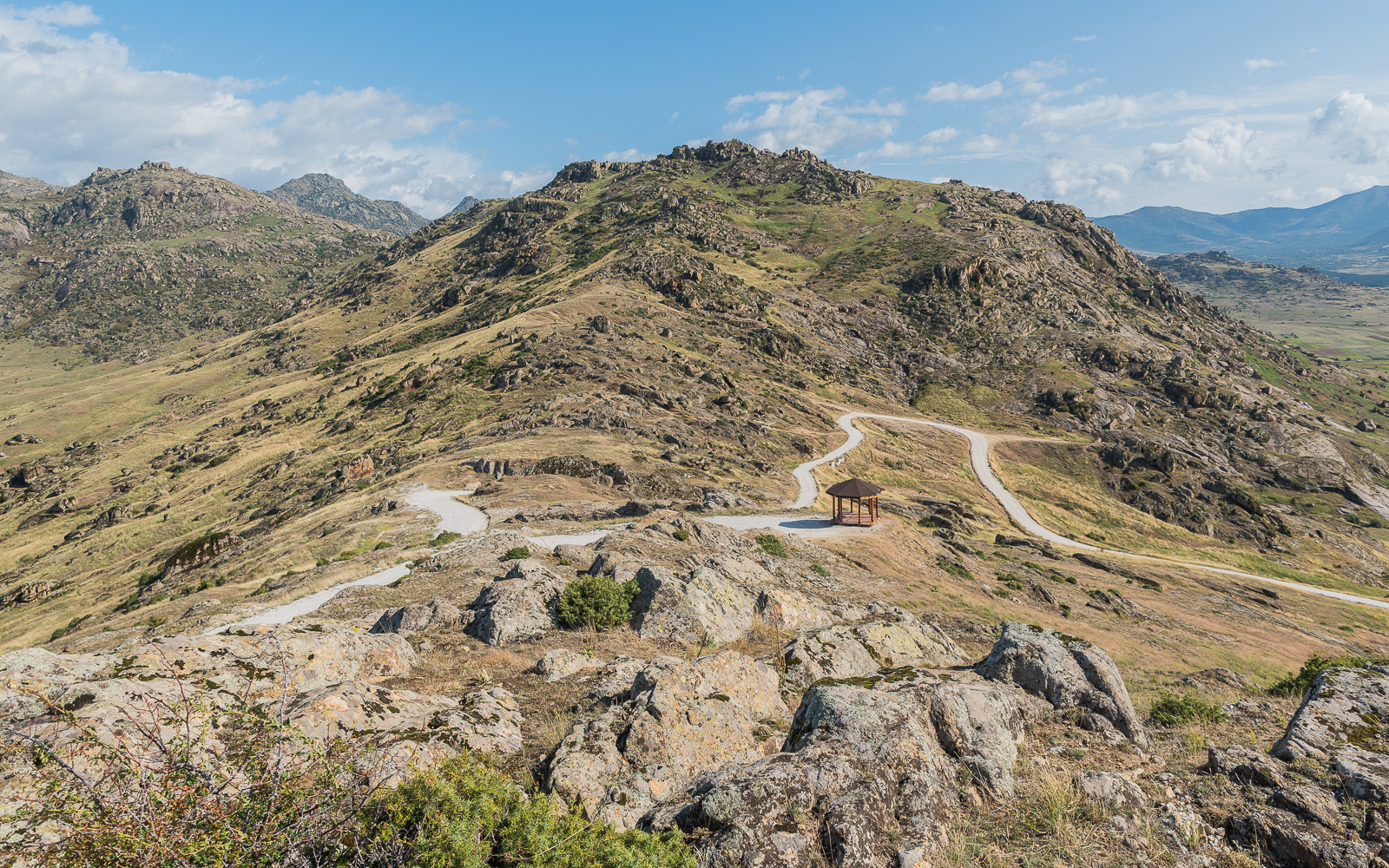 At the saddle, take a left and within moments you’ll be clambering around the castle ruins. Follow the steps to the top and you’ve reached the cross. See? I told you it was easy. 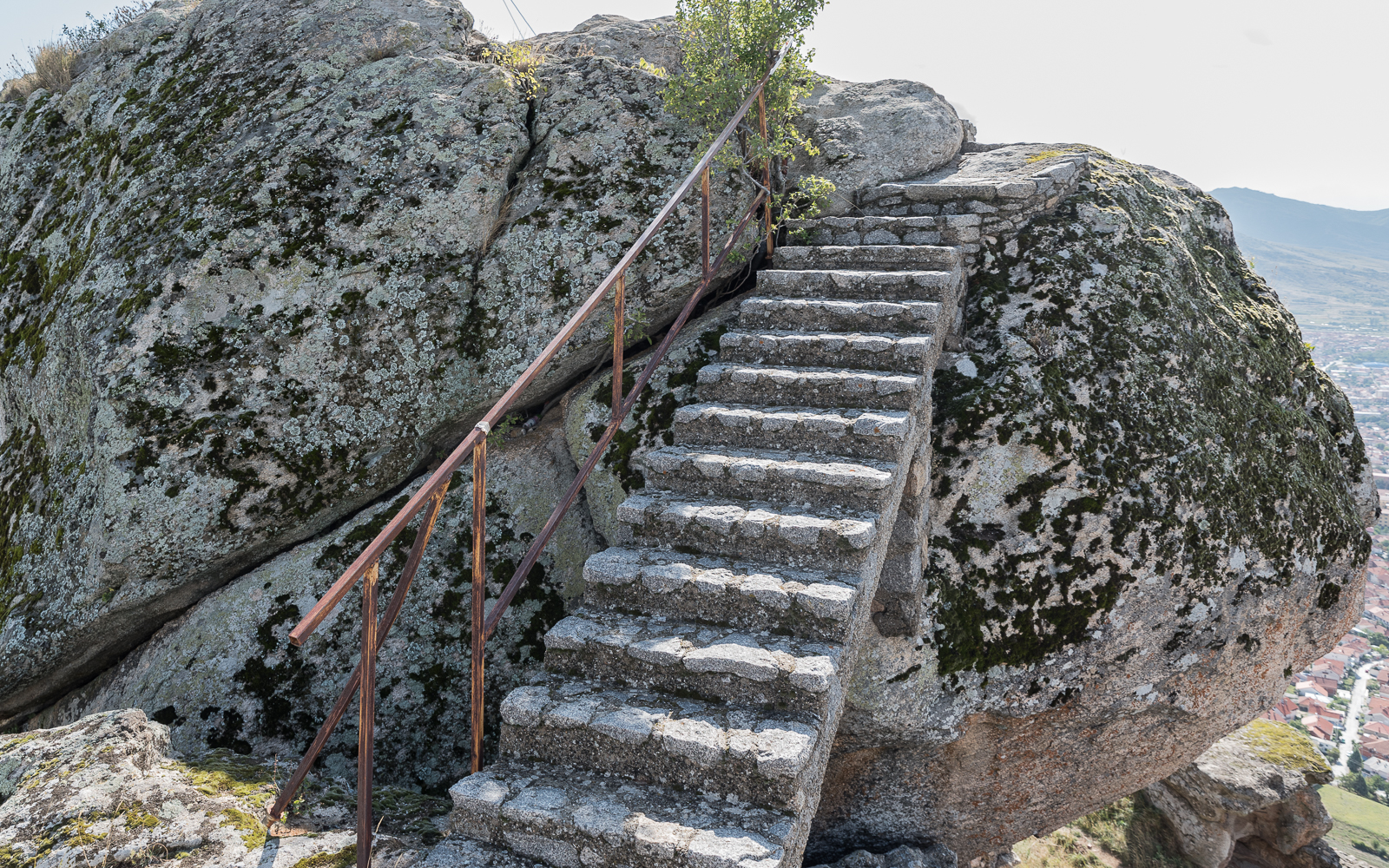 The unofficial route is straight up from the signpost at the trailhead. It’s not clearly marked, and at times I suspected I was following a goat trail. Normally, I try to stick to assigned trails to prevent erosion, but with a thunderstorm bearing down on me I ran down the hillside. 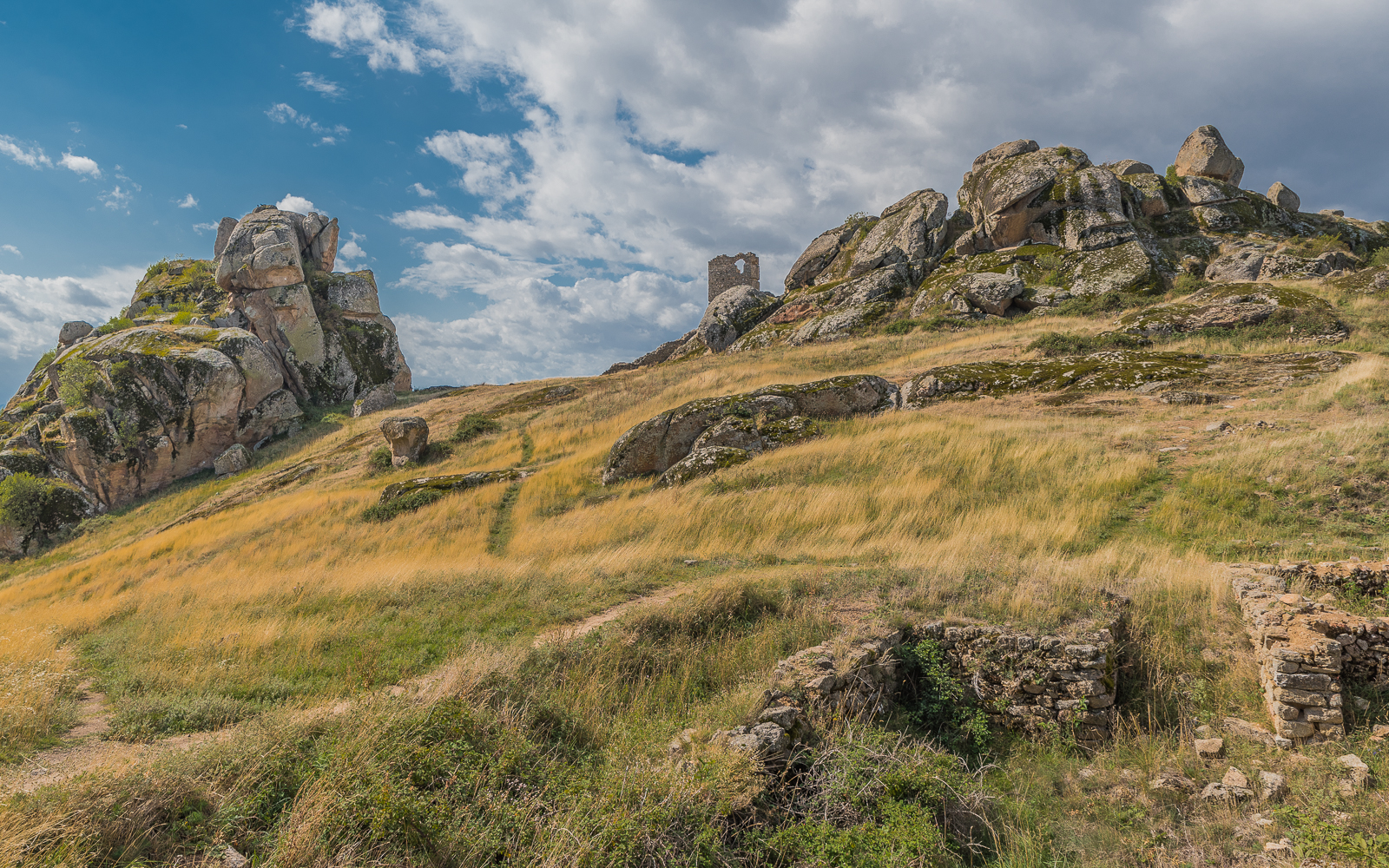 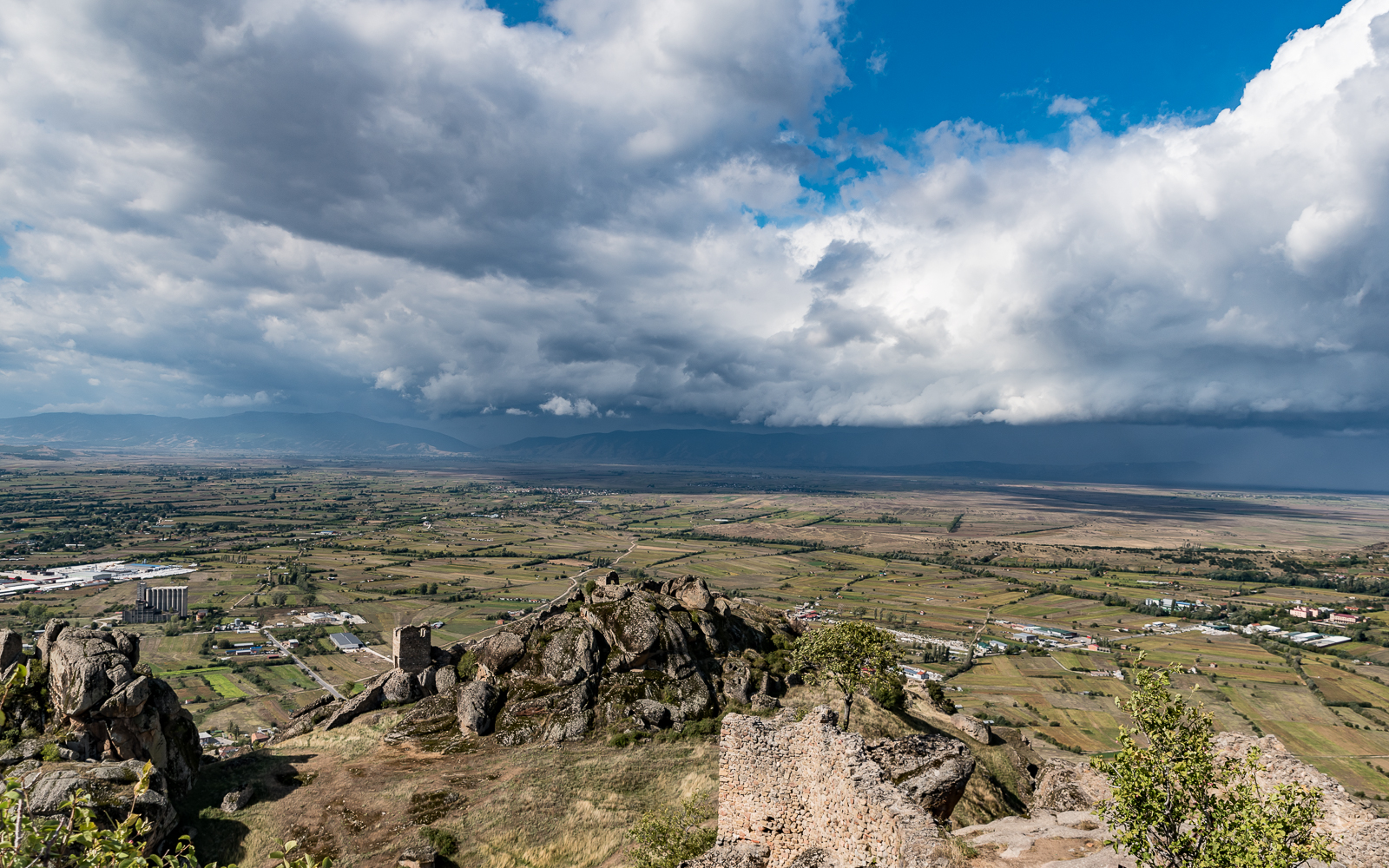 If you haven’t noticed, this entire area is a mecca for bouldering. 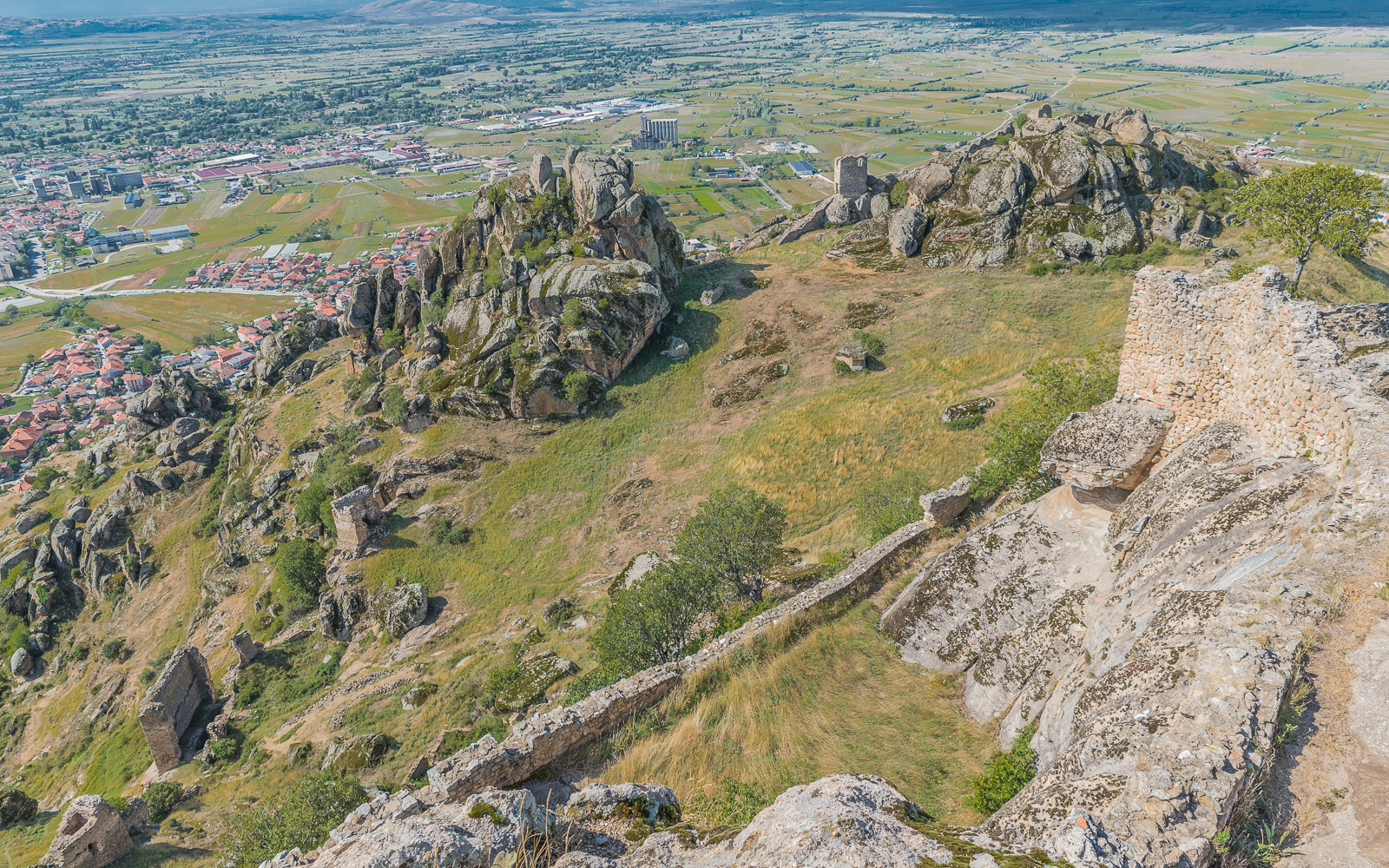 From the top, you have views of the entire city of Prilep and of the surrounding valley. 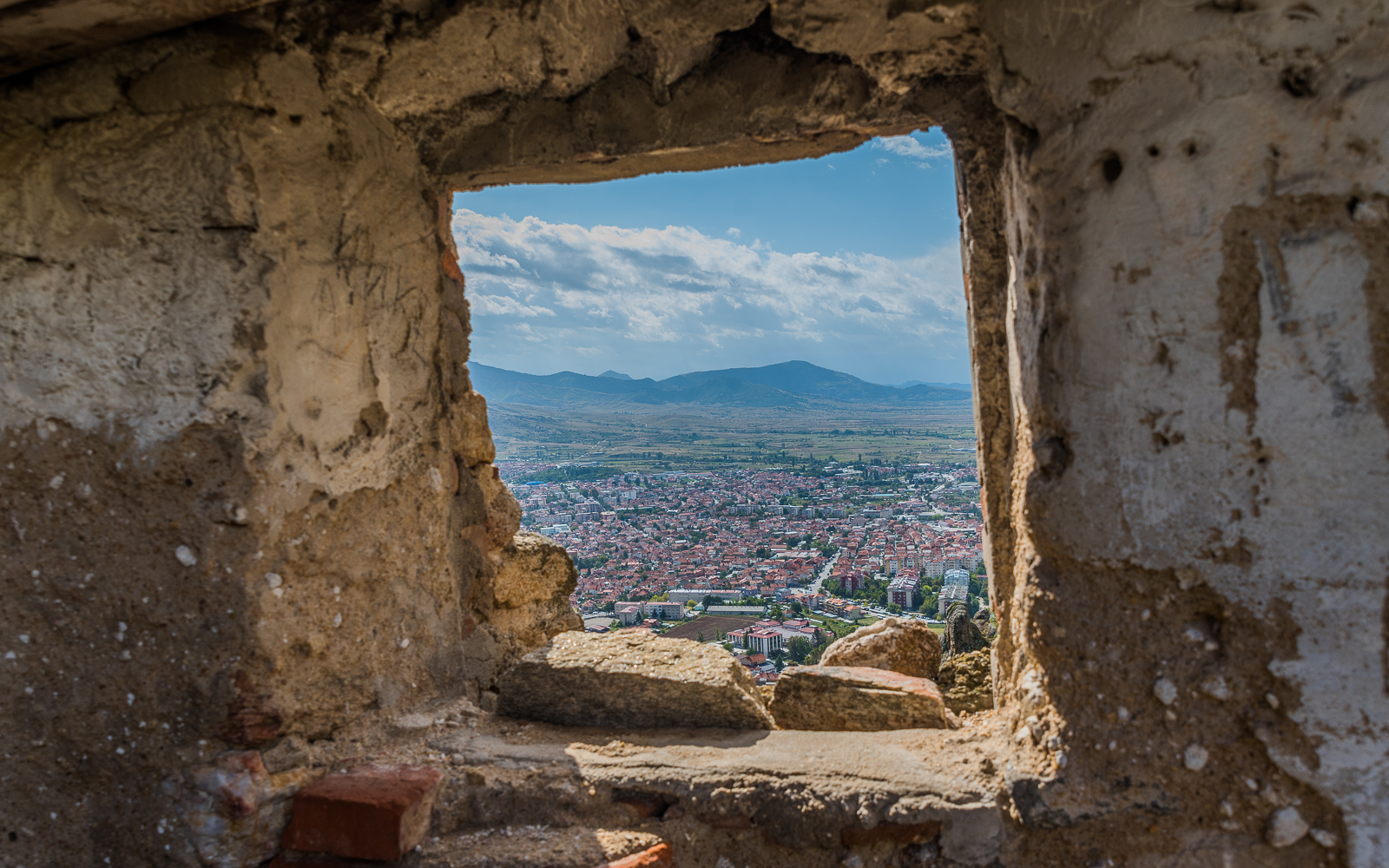 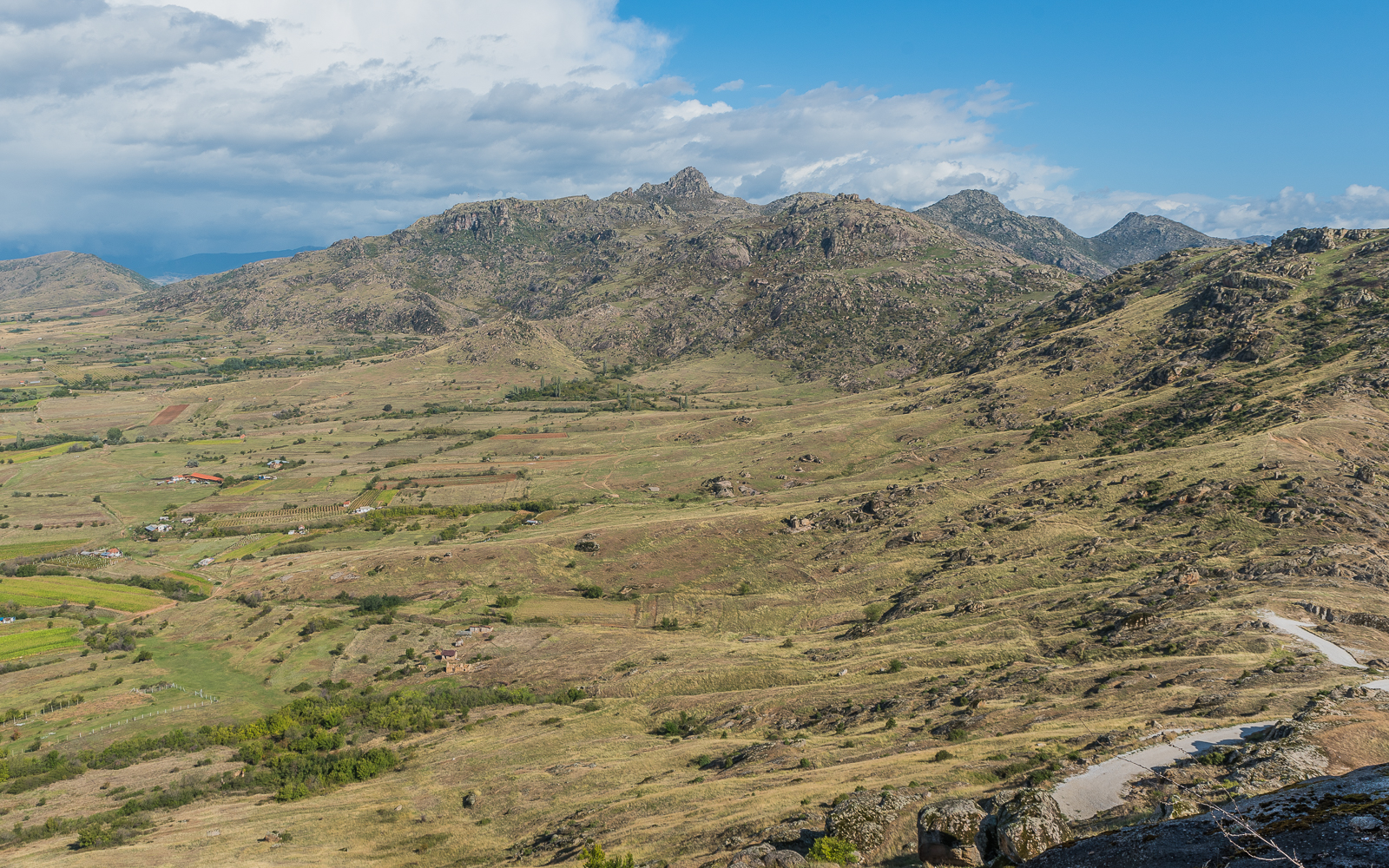 Quick Tip: I use the Accuweather App for forecasts which gave me a fairly accurate timing for this thunderstorm, although I almost got drenched when I got sidetracked by a blackberry patch.

Where to Stay: Prilep is small, but I’m finding it to be an ideal base for exploring the Pelegonia region of Macedonia.

Supplies: Stock up on fresh fruit and other local food at the Old Bazaar in the city center. 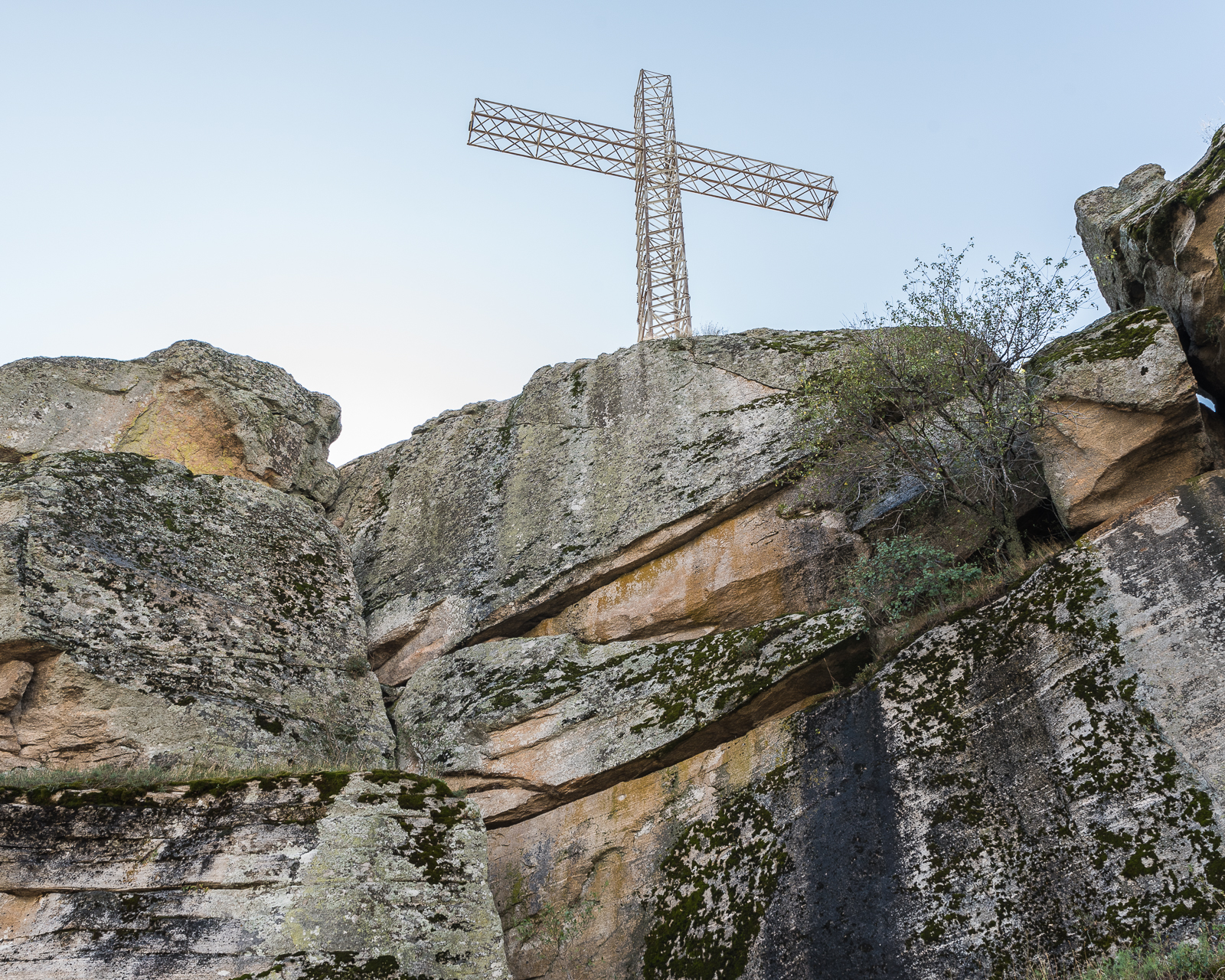 As promised, this is a super short, but satisfying hike that can be completed in under an hour. Most routes through Macedonia pass through this central city, so this hike can easily be added on during a road trip or one-night stopover via the train.