My Life as A Mobile Marketing Tour Manager

My main job from 2002-2014 was managing experiential tours across the United States. I worked in a variety of positions, mostly as a manager, but also as a tech expert and professional driver. During that time I worked 1000+ event days and drove various vehicles (buses, RVs, trailers) over 250,000 miles to every state in the continental United States.

Now with a pandemic completely gutting my current day-job as music festival photojournalist, I’m dusting off the cobwebs of my earlier career and hoping like hell that I never have to drive a bread van with no air conditioning across West Texas to a NASCAR event.

And if you’re still wondering what exactly consists of an experiential marketing tour, the flagship icon of our industry is the Wienermobile. And (deep sigh) no, I have never worked on the Wienermobile tour, but I did spent an entire afternoon trying to track down a 50 gallon drum of baby shampoo in Albuquerque.

Okay prospective employers, lets do this..

Sheryl Crow, Train Get In Gear For Jeep Tour – MTV

My first tour! We shadowed along the Jeep World Outside Festival for the summer with a small tent and a two-person whitewater rafting video game. I learned all the words to Drops of Jupiter against my will and that Sheryl Crow usually leaves behind a six-pack of beer in her dressing room. 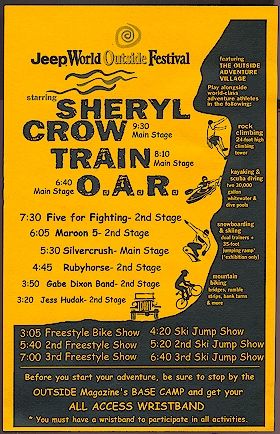 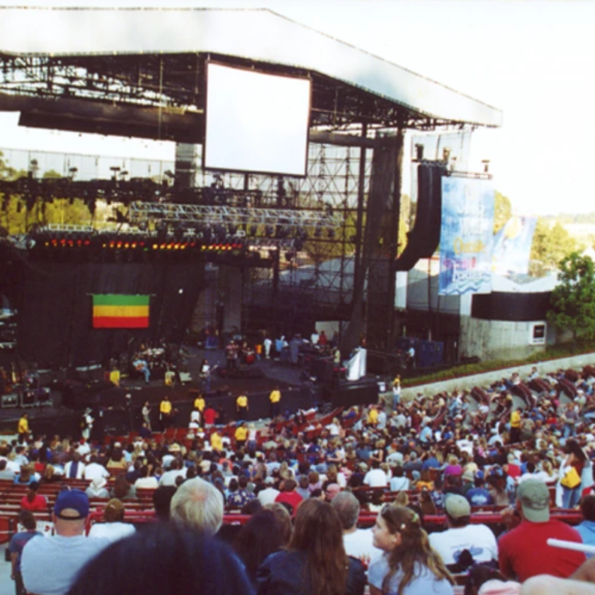 Turnover in the industry is high, so I was able to find work immediately after Gore-Tex on this fall tour. I don’t remember much other than amphitheaters in the United States all look the same and that I never want to live on a 15-person tour bus ever again. On the one hand, I got to see N.E.R.D. live every day, but on the other hand I also had to listen to Hoobastank every day.

I had never been on Spring Break in the Dirty South so everything about this tour South to Padre Island, Daytona Beach, and Panama City was an overwhelming experience. It’s the only event I managed where shoes were optional, and also the only event where I’ve seen a girl get so drunk that she digs a hole in the sand to vomit into, passes out over the covered hole, gets sunburned, and then wakes up to win second place in the daily bikini contest. 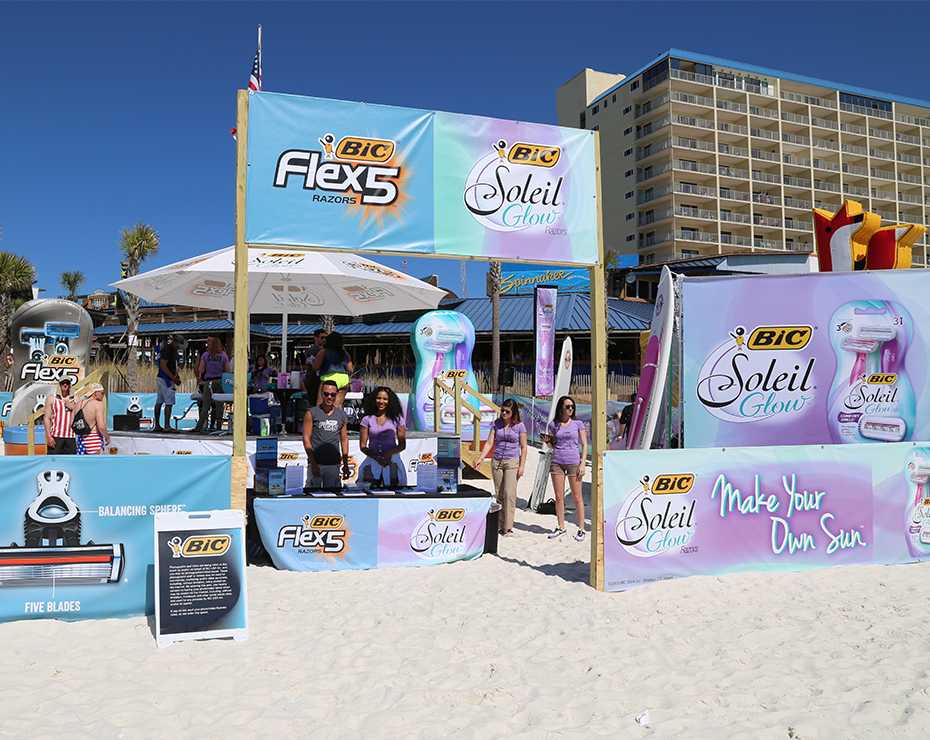 This tour featured a simulator so teens could see how bad they were at driving while distracted. Spoiler: teens are fucking accident machines and the driving age should be 18. One of my main duties was smashing in a car door window six times a day to showcase DuPont’s window technology. We also threw shirts to the crowd, only to have half of them handed back with the occasional homophobic slur when they saw it was a Jeff Gordon t-shirt. 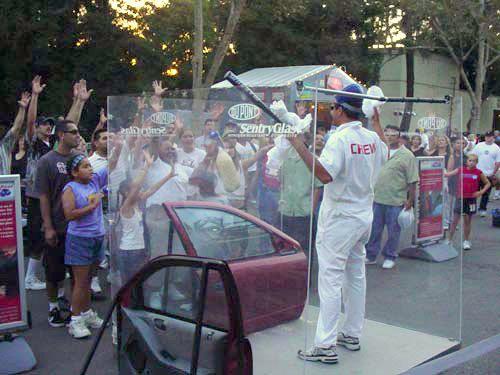 Just your typical full-sized bus with a 40-foot retractable climbing wall. I had to get a commercial driver’s license for this tour, a license I still have today. Fun fact about the bus, it was biodiesel, a fuel that nobody sells, but makes the whole bus smell like french fries.

A weird marketing twist in the middle of this promo is that we partnered with the Richard Branson “Who Wants to Be a Billionaire” reality show and drove around New York City to pitch Playboy and Fox News.

Sprint became the flagship sponsor of NASCAR, and as Alltel was one of their major competitors we were more or less banned from the track. Basically, we went full guerrilla marketing at NASCAR races. We would load up a staff of twenty with thousands of free goodies to give away, drop them off at campgrounds, and then scoop them back up before security could arrive.

I returned to the sweet embrace of NASCAR, this time with a giant red couch. I don’t remember the exact pitch but drunk NASCAR fans would fumble their way across the couch, dig up over-sized coins, and we would give them free stuff. 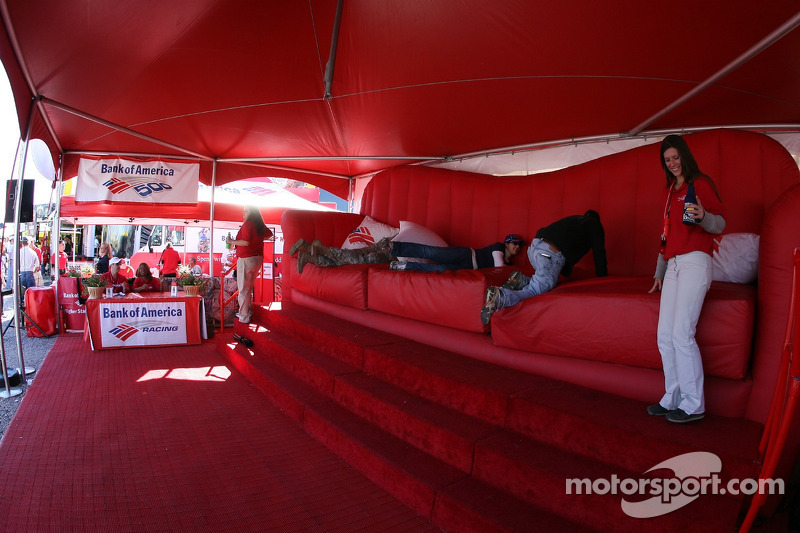 My job on this tour was to manage 25 models at Beyonce shows. I didn’t have to drive a giant bus. I didn’t have to set up a six-hour setup in the middle of summer. The biggest challenge was that we were constantly moving, but also that somehow we had to dry-clean 25 dresses, and definitely not dump them into the closest laundromat. The highlight of the tour was the LA Staples Center was shaking the hand of Alan Thicke (Robin Thicke was the opener) and telling him “you’re doing a great job.” 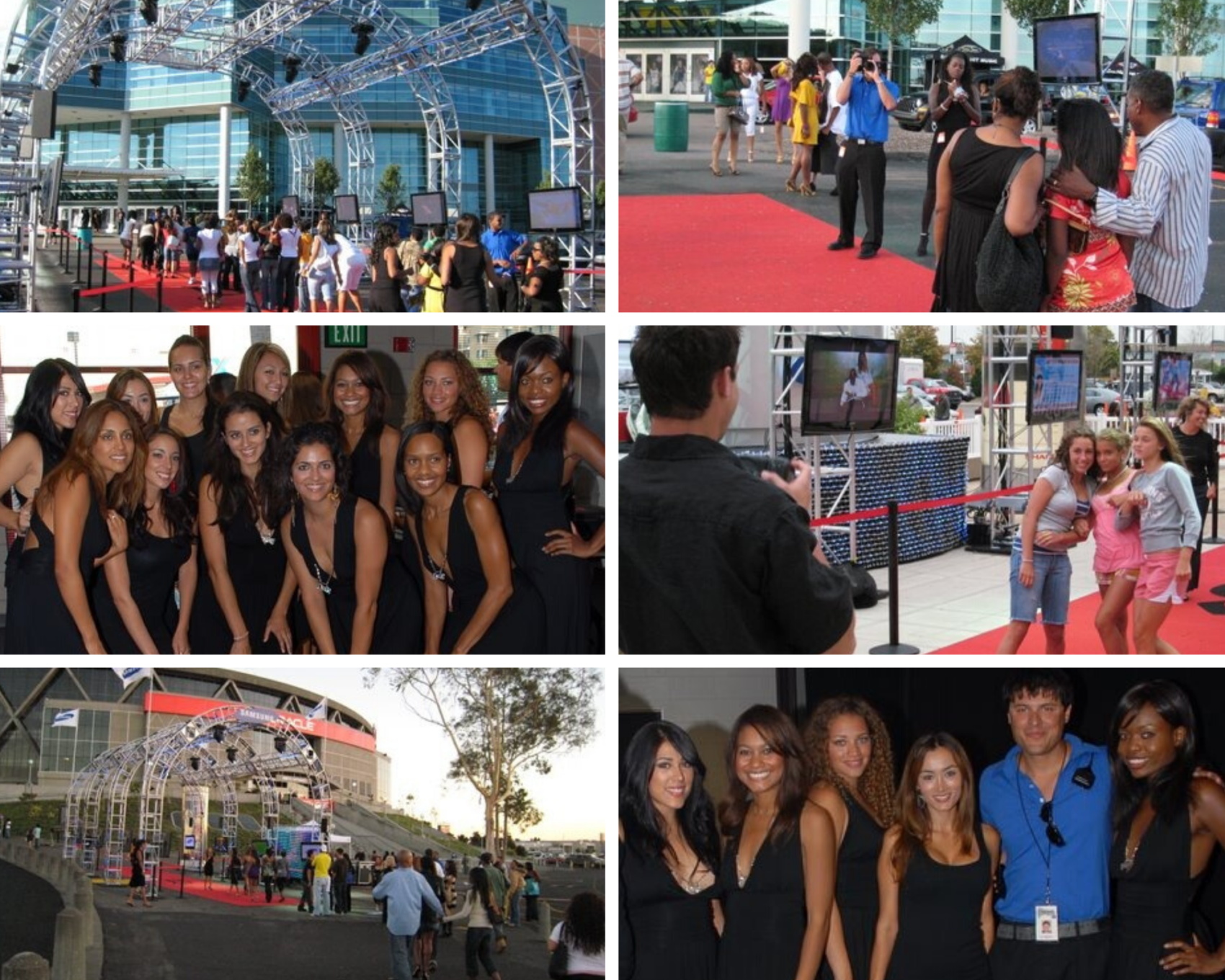 I’m not even sure how to describe this one. Basically, couples would go through a Double Dare-style course and then clean off in an open shower, all while being helped along by a dozen Axe models. It’s one of the most insane events I’ve ever worked.

Fun fact: The “mud” for this event was actually mashed potatoes and coffee grounds which we would beforehand in a giant trash barrel. We needed to fill it six times to fill the pool and then clean the turf out for an hour every night so it wouldn’t turn rotten. 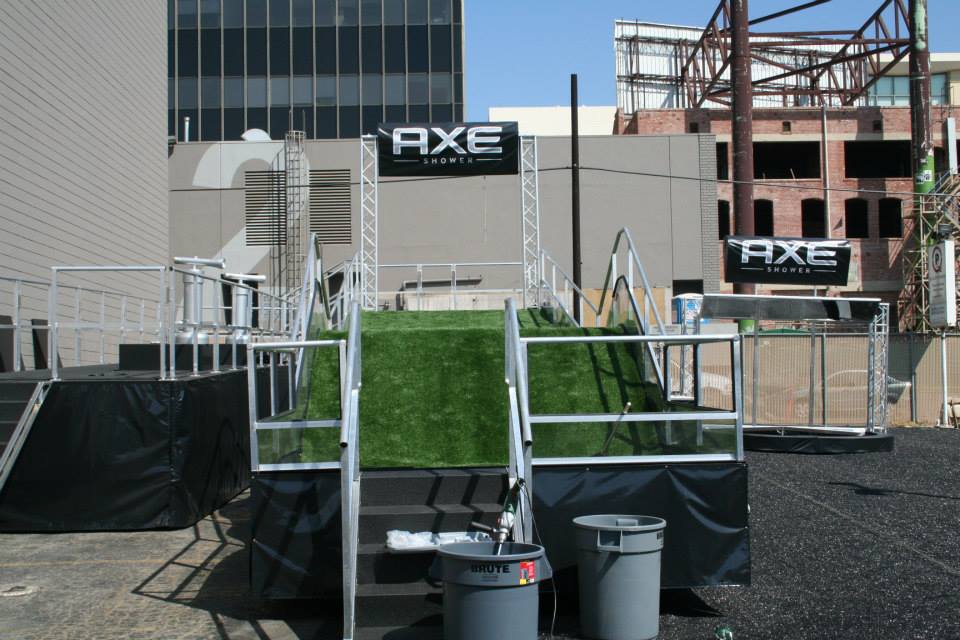 Bank of America was a sponsor for the Olympics so our job was to drive around the country recording cheers. I spent the summer inside a truck filming people via a green screen while they screamed the most insane shit I’ve ever heard. For some reason, the YouTube site is still up.

My second tour with Beyonce was nothing like the first. This time I did have to drive a large vehicle. I also had to spend hours setting up a mini-museum dedicated to Beyonce’s life in 100+ degree weather. On the plus side, I did get to watch her eat Hamburger Helper and pretend that it was delicious. On the negative side, I got yelled at by her stylist for not taking proper care of her favorite dress. 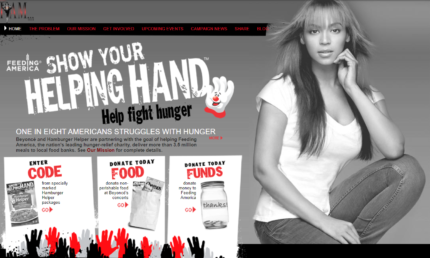 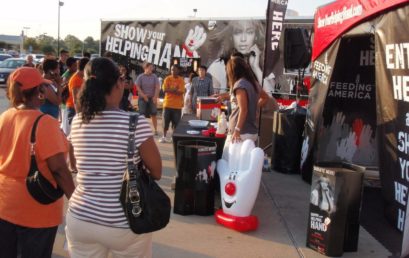 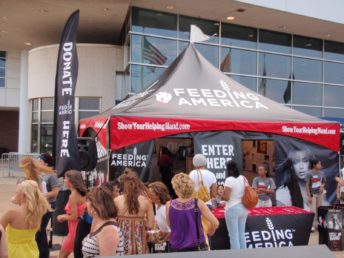 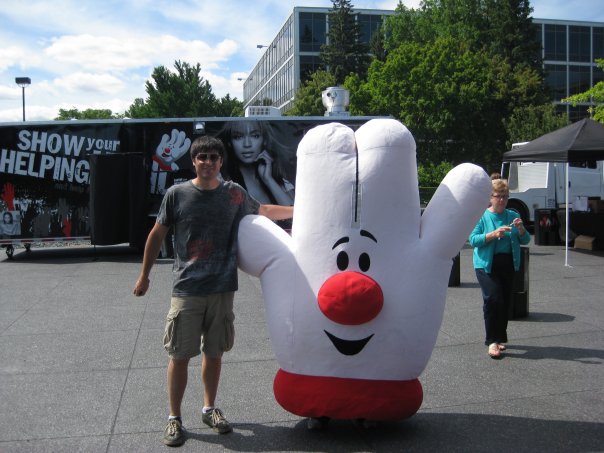 500,000 bikers. South Dakota. Lorenzo Lamas. I ran a tent where some motorcycle dudes built a bike from scratch over 7 days. If that sounds boring, I can tell you that it is very boring. What wasn’t boring? Bare-knuckle amateur boxing next door that made Fight Club look like a kiddie show. 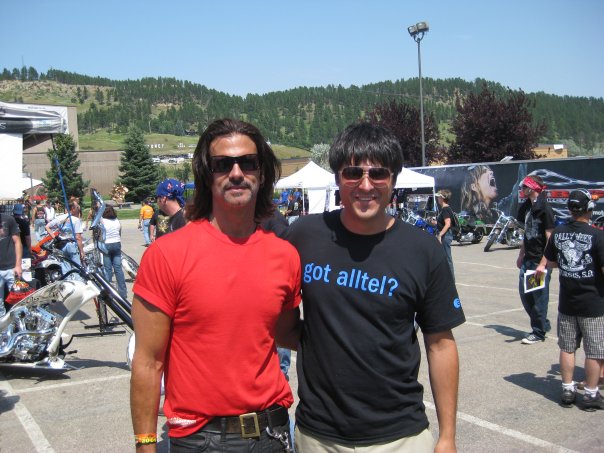 This was also the year that Steven Tyler fell off the stage at a campground concert.

So Alltel was in the process of being purchased by Sprint, but one of the catches with the Justice Department was that they still had to keep a marketing promotion on the road. I didn’t care too much about the specifics, only that we barely worked more than twenty hours a week. Our tour covered the most surreal collection of cities in America with stops in Alabama, New Mexico, Utah, Montana, and a month of my life in both Dakotas.

We brought this truck around the United States and showed off a bunch of sunglasses. During the Governors’ Ball Music Festival in New York City, we never left the venue and just slept in the truck. I also watched all of the Modest Mouse set from the front seat while speaking as a guest for over an hour on a BBC radio show. 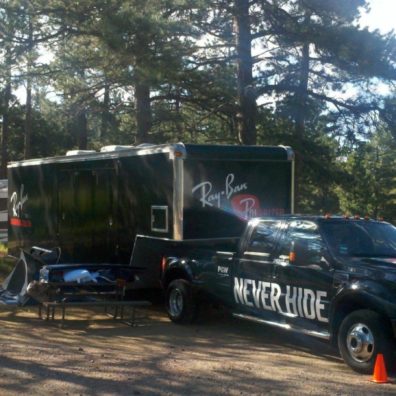 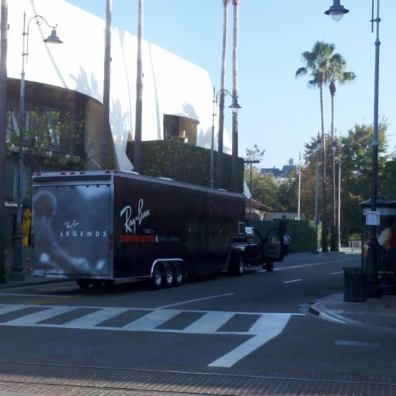 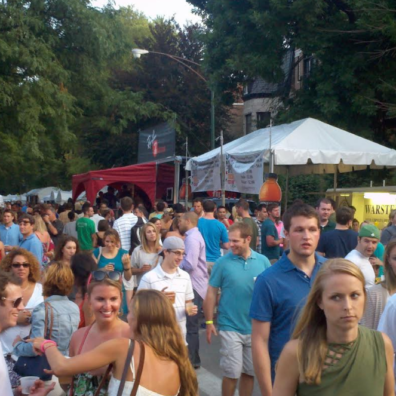 Lupus is a horrific disease, but little is known about it, so this educational vehicle was enlisted to go around the country. No surprise here that this was a brutally depressing tour, but I wanted to at least try to use my marketing skills for good. This was my last tour. 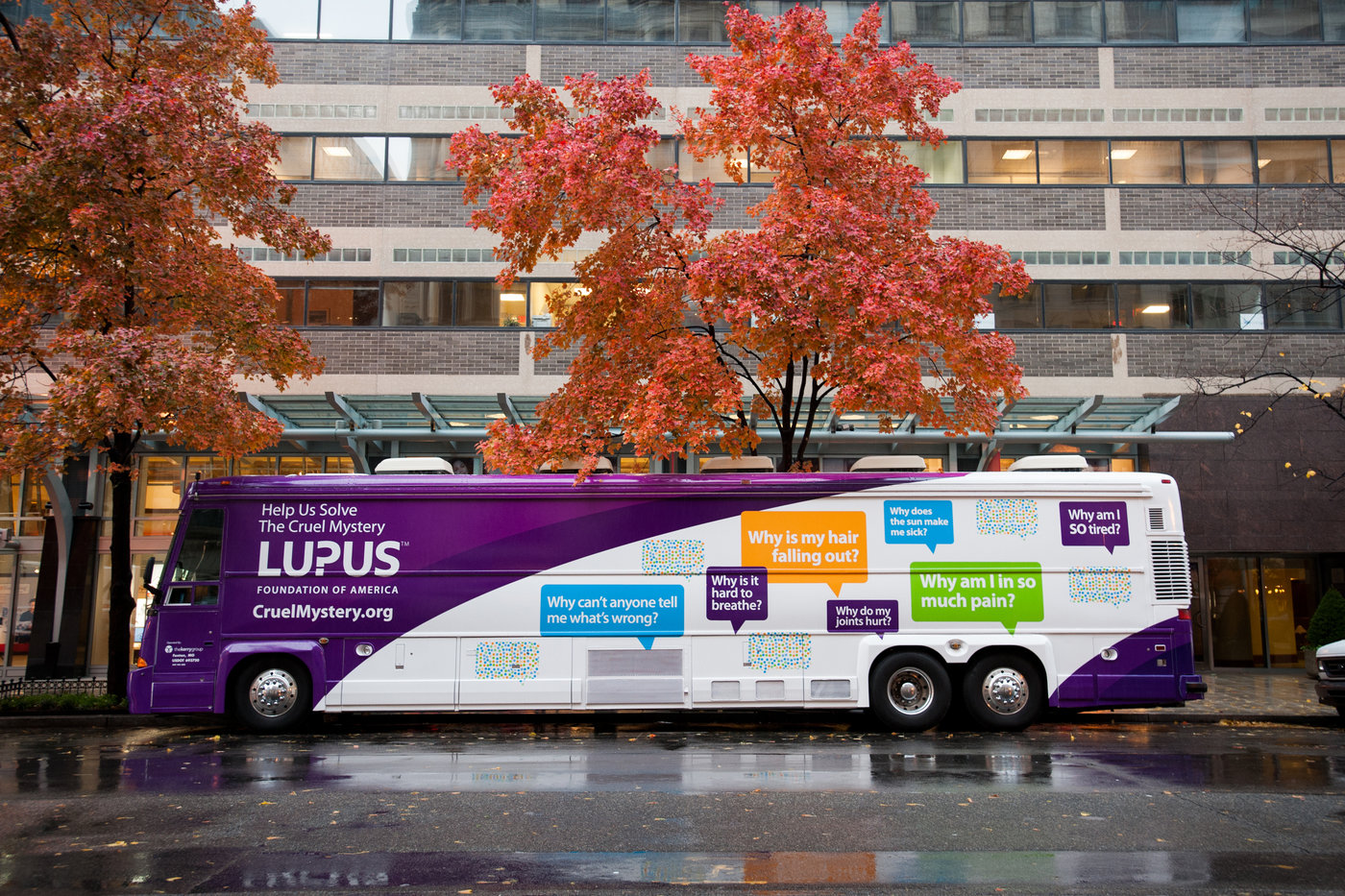 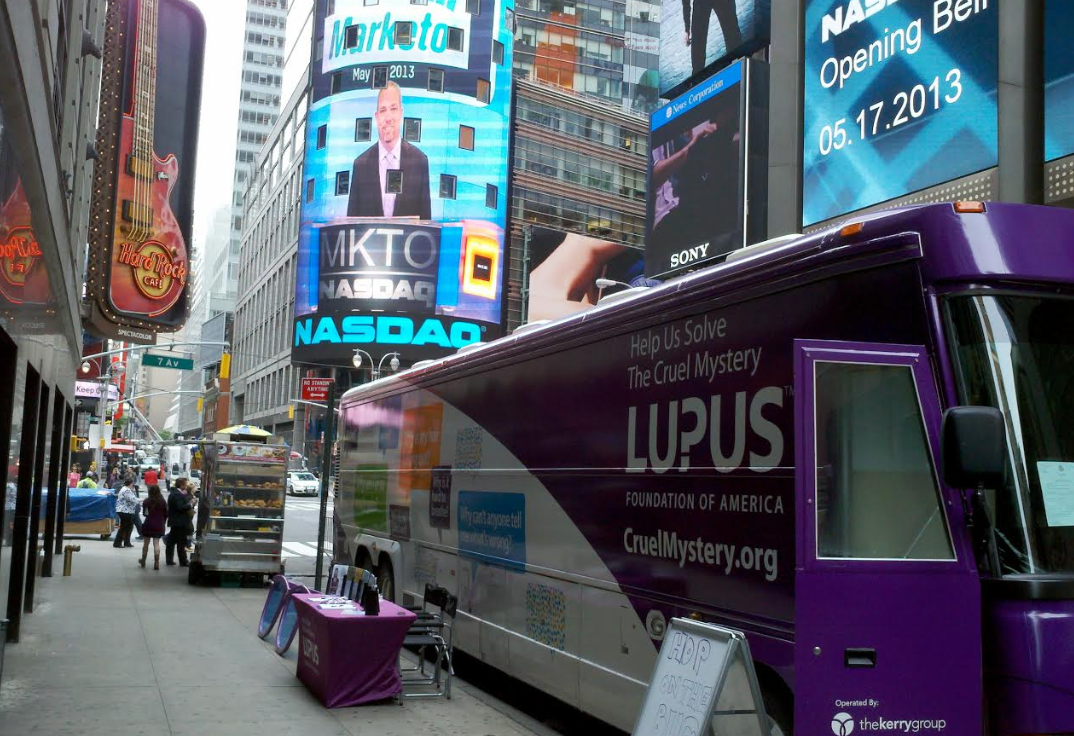