This weekend the 100 Nights of Summer Tour is off to the races! I traveled to the wide fields and open skies of western Germany for the annual Maifeld Derby. This horse-themed weekend held at a racetrack is another slice of indie rock fun  — and for the first time on this trip I get to go camping! With a history of indie rock in its soul, the seventh edition has branched out into other interesting genres with a lineup that has me very excited. 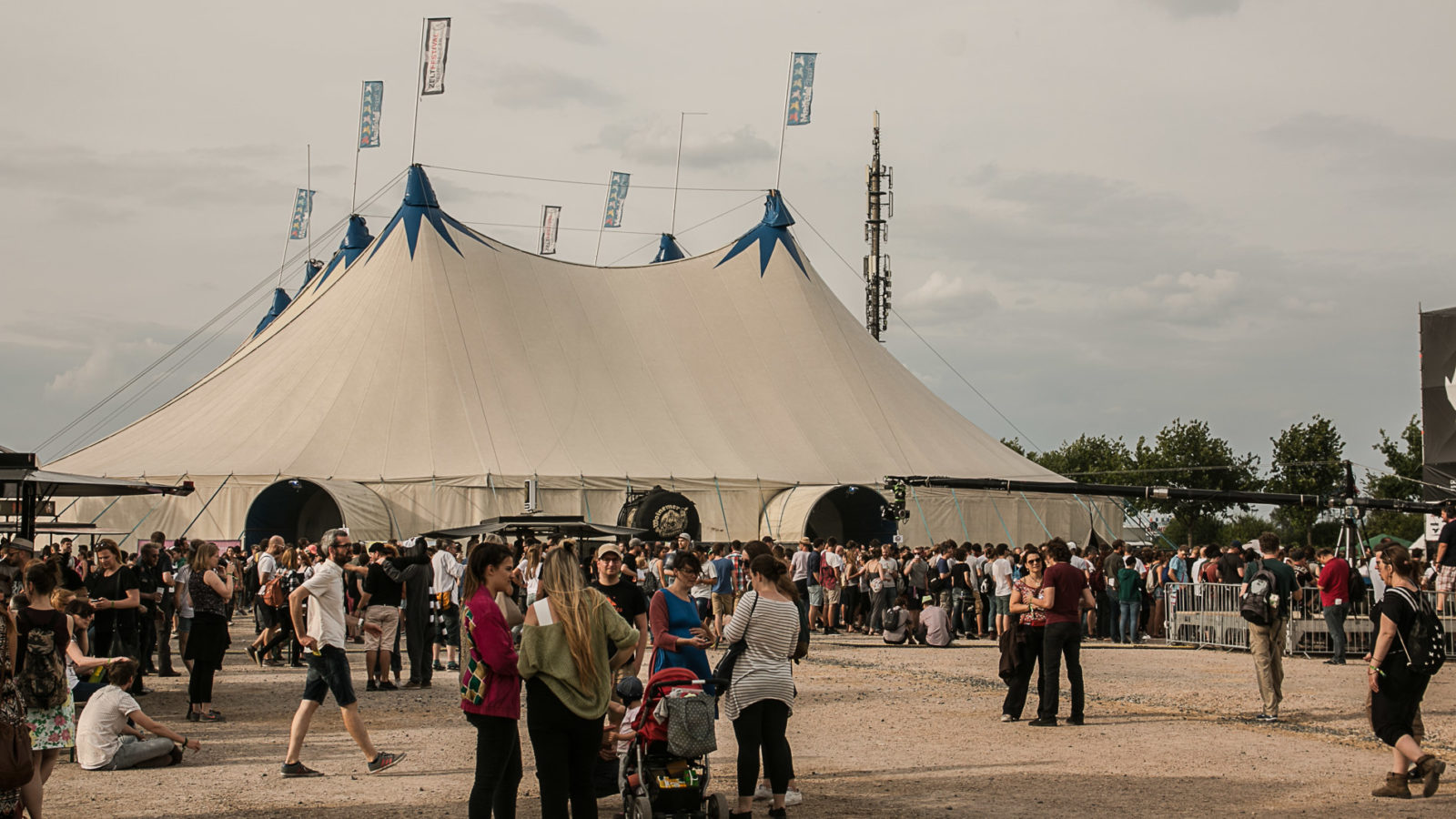 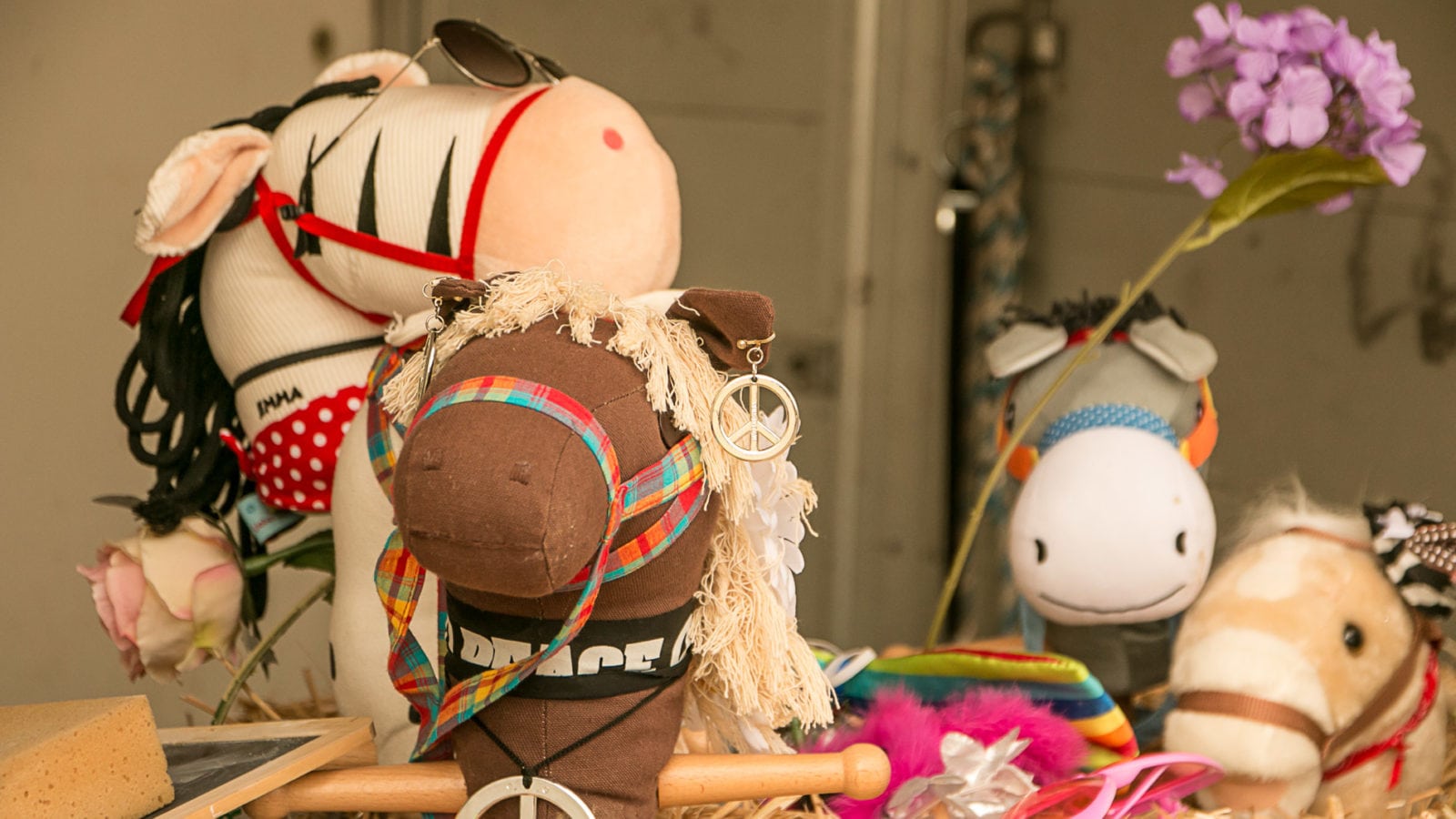 Favorite Set of the Day: Cigarettes After Sex
There’s an ebb and flow to festival energy, and sometimes it’s nice in between the carousing and the yelling and the whatnot, to settle in for a burst of soothing ambient pop in a dark tent on a sunny day. My campsite neighbors described Cigarettes After Sex as “completely boring” and the “band looks like they got into a fight before coming on stage.” I guess they weren’t in the mood for dream poppy covers of REO Speedwagon.

Surprise Set of the Day: Trentemøller
For some reason, I thought Trentemøller was a 50-year old bald German DJ that played only industrial techno from the early nineties, so I found myself pleasantly surprised when he showed up with a full band. Also, he’s Danish, wrote the theme songs for AMC’s Halt and Catch Fire, and I’m apparently terrible at researching bands.

WTF Just Happened Set of the Day: Bilderbuch
This Austrian indie-pop boy band blew the canopy off the main stage tent. They have one song where they just repeat sneakers4free a dozen times, and another where they chant Playstation. I tapped out after twenty minutes.

Favorite Set of the Day: Minus the Bear
I haven’t caught Minus the Bear in years, but here they are, in a small tent playing at 11:30 at night on a Saturday, and just pounding out some experimental rock. This will end up being my favorite act of the weekend. 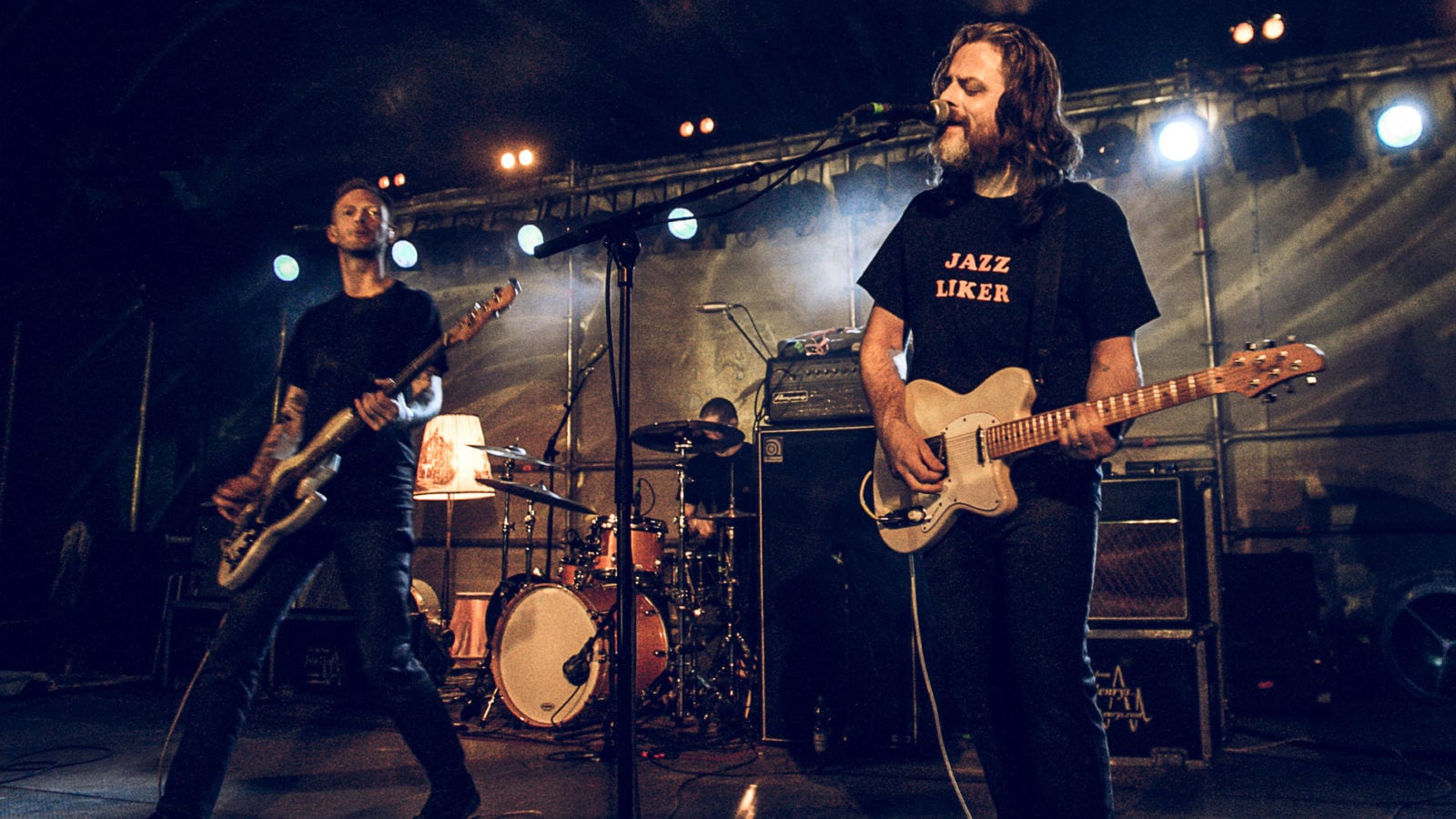 Surprise Set of the Day: Kate Tempest
I was unprepared the first time I saw Kate Tempest back at Primavera Sound, and it just didn’t take. But I’ve been on the road for nearly three weeks, an eternity really, and have musically matured as a human being, so perhaps I was ready for a solid burst of Kate Tempest anger performed on an outdoor stage. Her mix of political poetry rants and hip-hop had the Germans (and myself) loudly applauding. 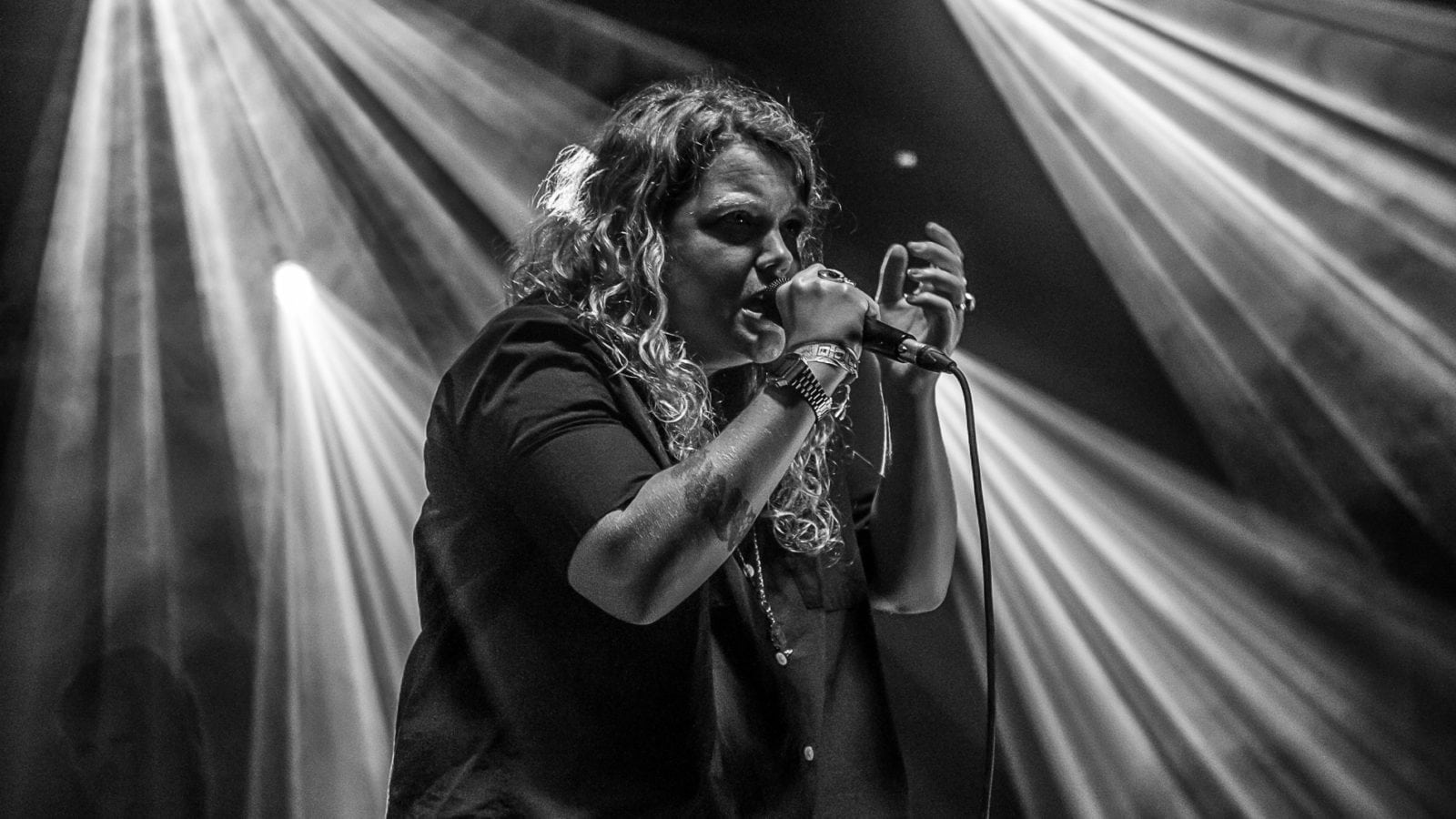 WTF Just Happened Set of the Day: Seigfried and Joy
I watched a German magic show for nearly an hour. 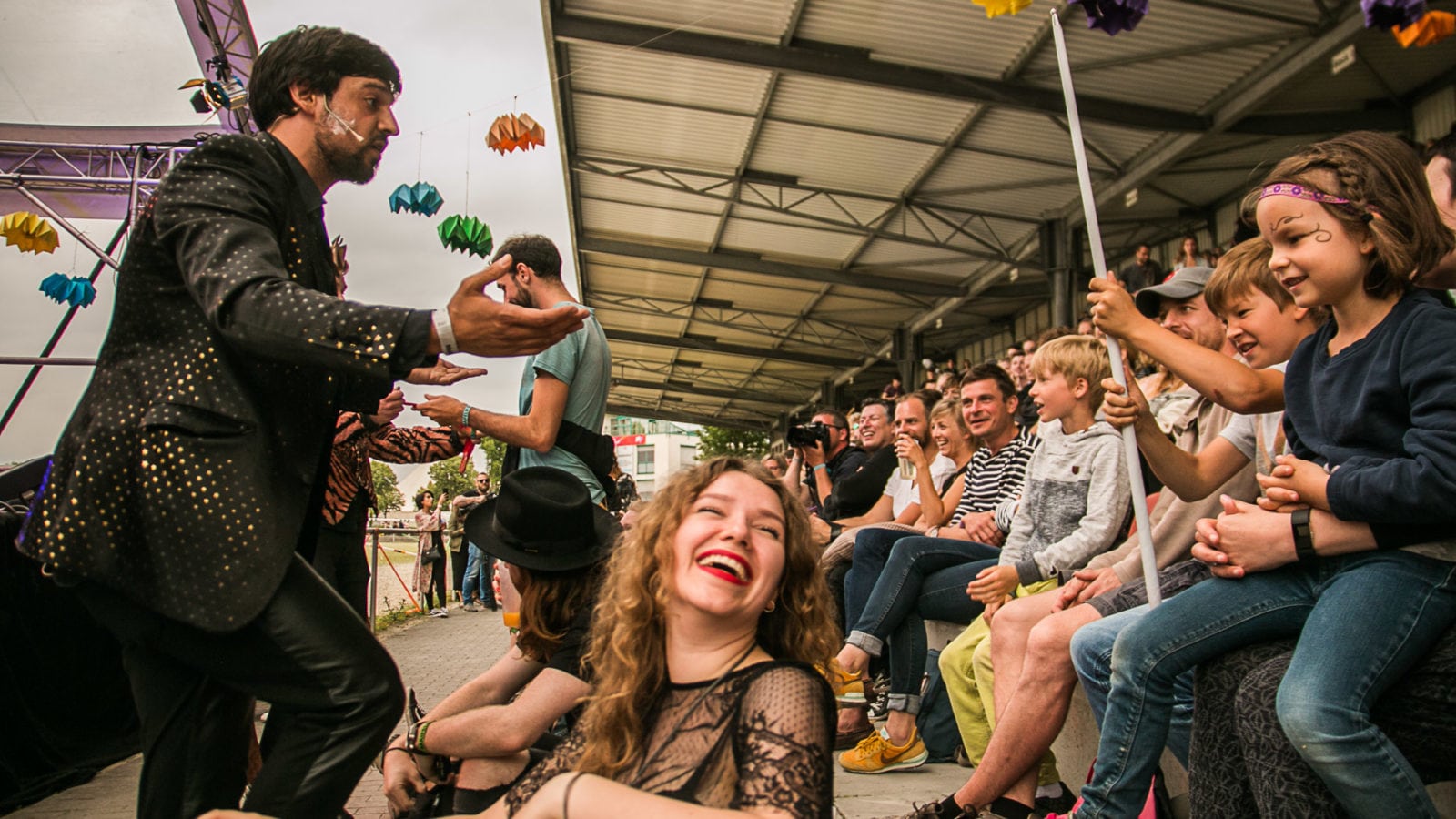 Favorite Set of the Day: Whitney
Whitney wins today strictly because he chugged straight from a bottle of white wine, and played a cover of the theme song to The Golden Girls, a television show that I’m almost certain nobody had any familiarity with. He lost a few points for backpedaling by saying “we don’t even like the show”, then gained back all the points for reminding me that it was Father’s Day in the United States.

Surprise Set of the Day: Wand
We were watching Amanda Palmer from the Dresden Dolls rock some ukulele, when the PR guy from Maifeld told me to come with him to see Wand. This is how I was introduced to the sweet, shreddy noise of this Los Angeles band.

Festivals for People That Don’t Like Festivals
I believe that there’s a festival for everyone, and for those of you that don’t like thousands of screaming drunks, Maifeld Derby is the type of festival I recommend. It’s super kid-friendly, there’s not a lot of walking, and the lineup is just out of this world.

What’s in a Name?
The Maifeld Derby takes place at a horse-racing track which inspires their name, logo, and there’s even a stage that you can watch artists from the grandstands. But the most impressive horse-related activity is the highly competitive Steckenpferd-Dressur, where festies compete on wooden hobby horses for free tickets to next year’s festival. 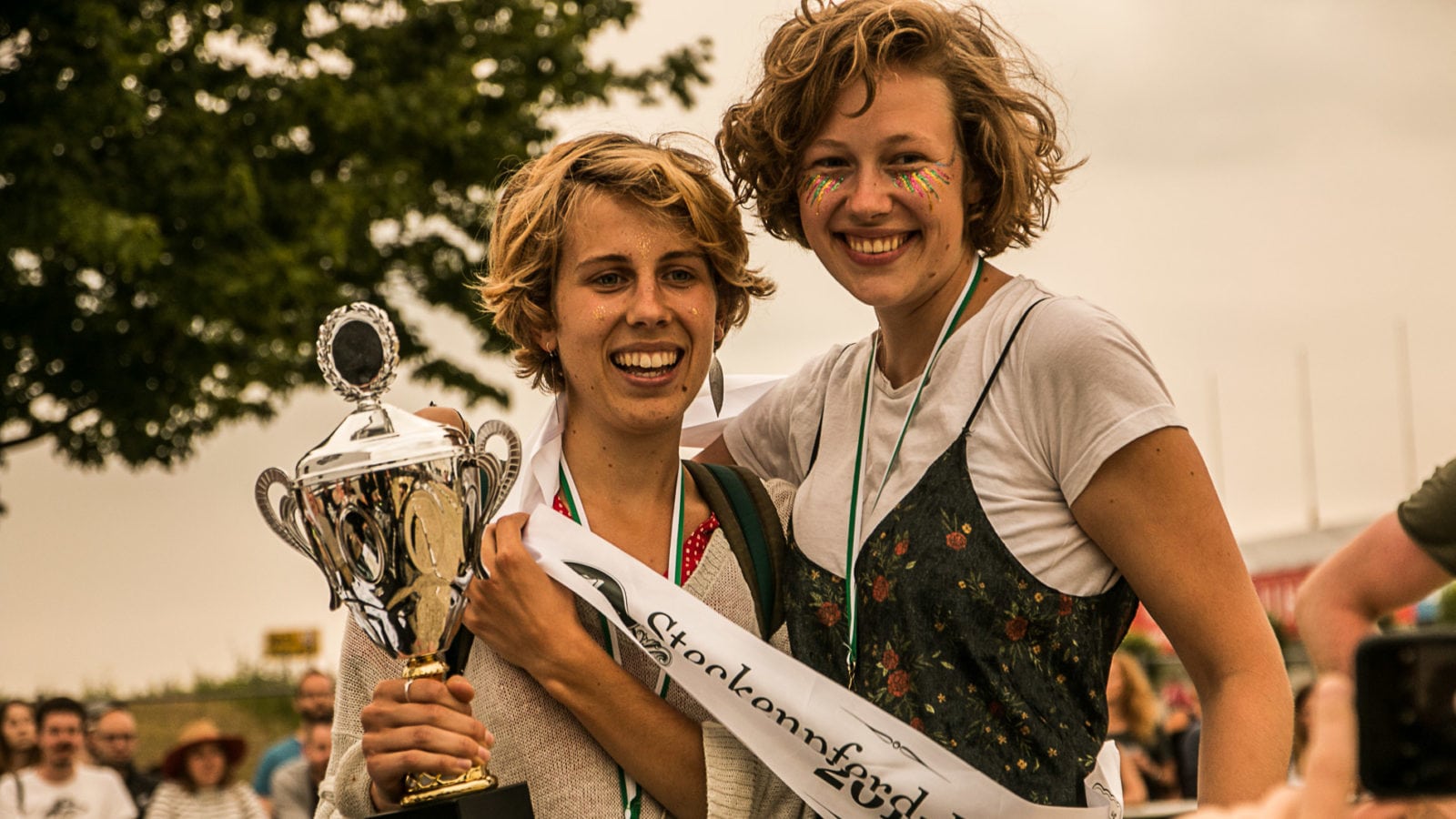 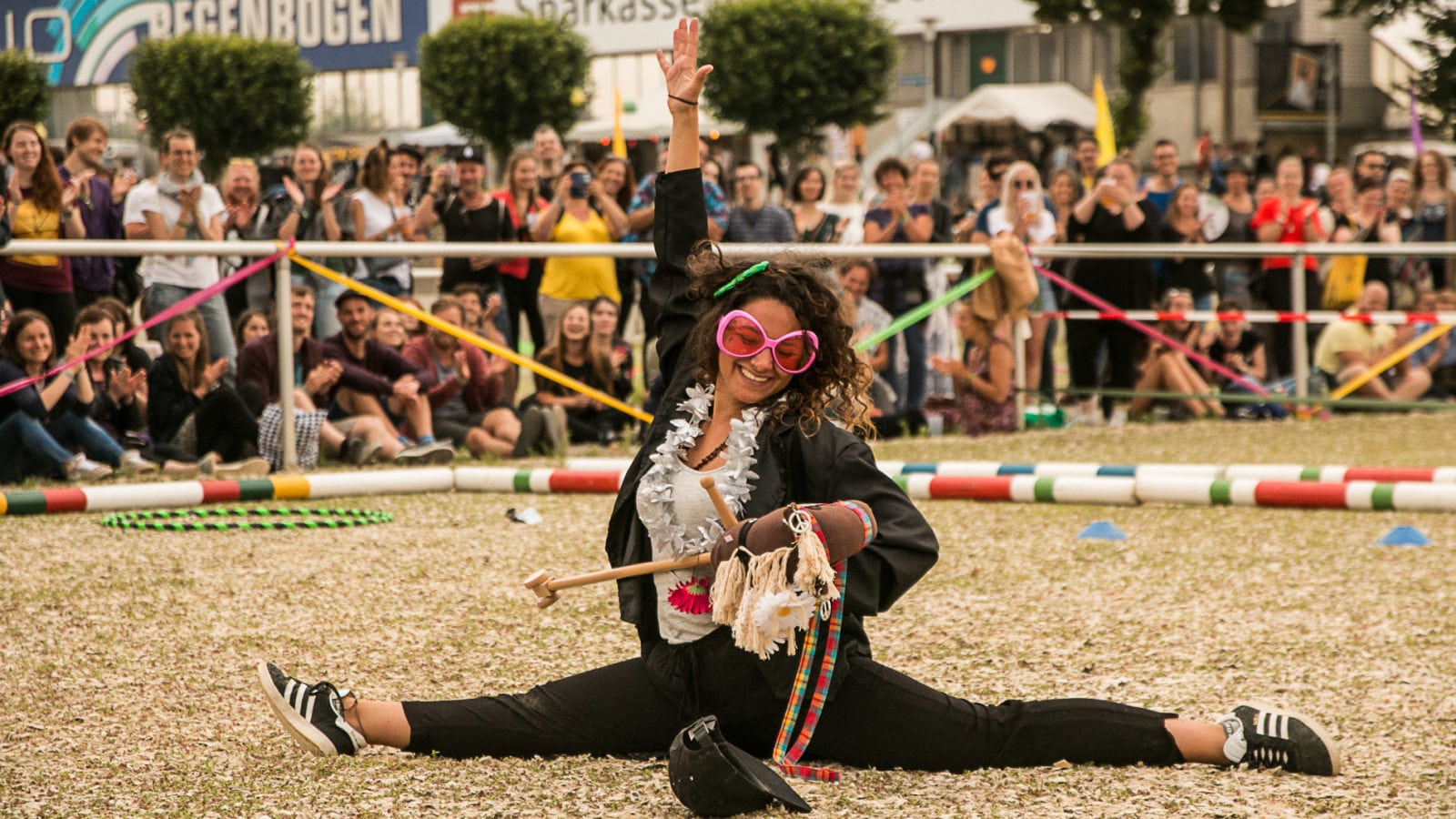 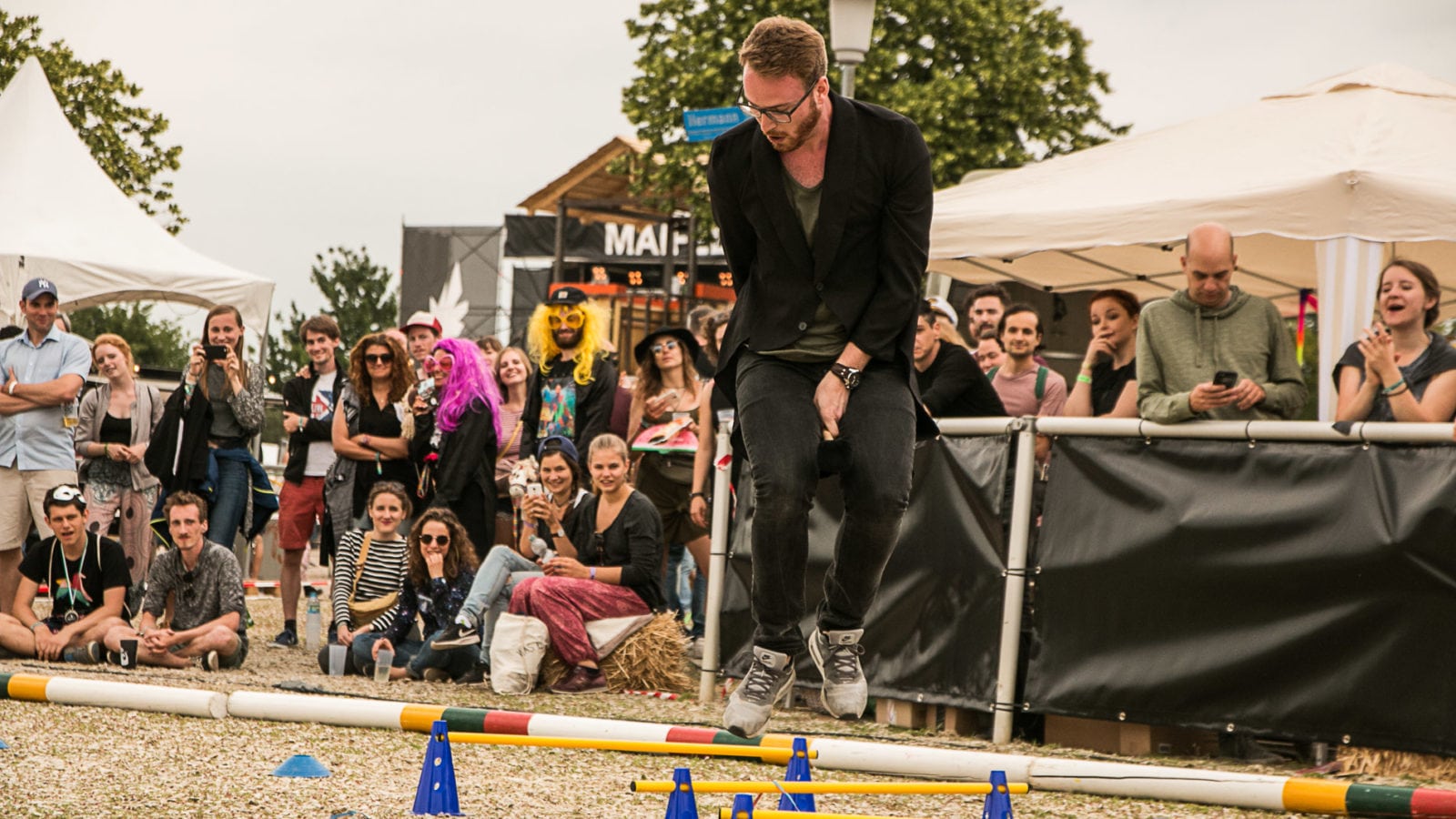 The Solitude of Camping
Festival campgrounds are loud places. People shouting on a loudspeaker at seven in the morning. A girl loudly grunting “scheisse” in between bouts of vomiting. Terrible eighties music being blasted at top volume.* So you can imagine my surprise at waking up at seven in the morning on Saturday to a silence so deep that I thought my tent had been magically transported to an alternate universe.

*All things I witnessed over the weekend

Festival Fashion Trend in Germany (Men)
I may be the only person at this festival not wearing jean shorts with the cuffs rolled up. 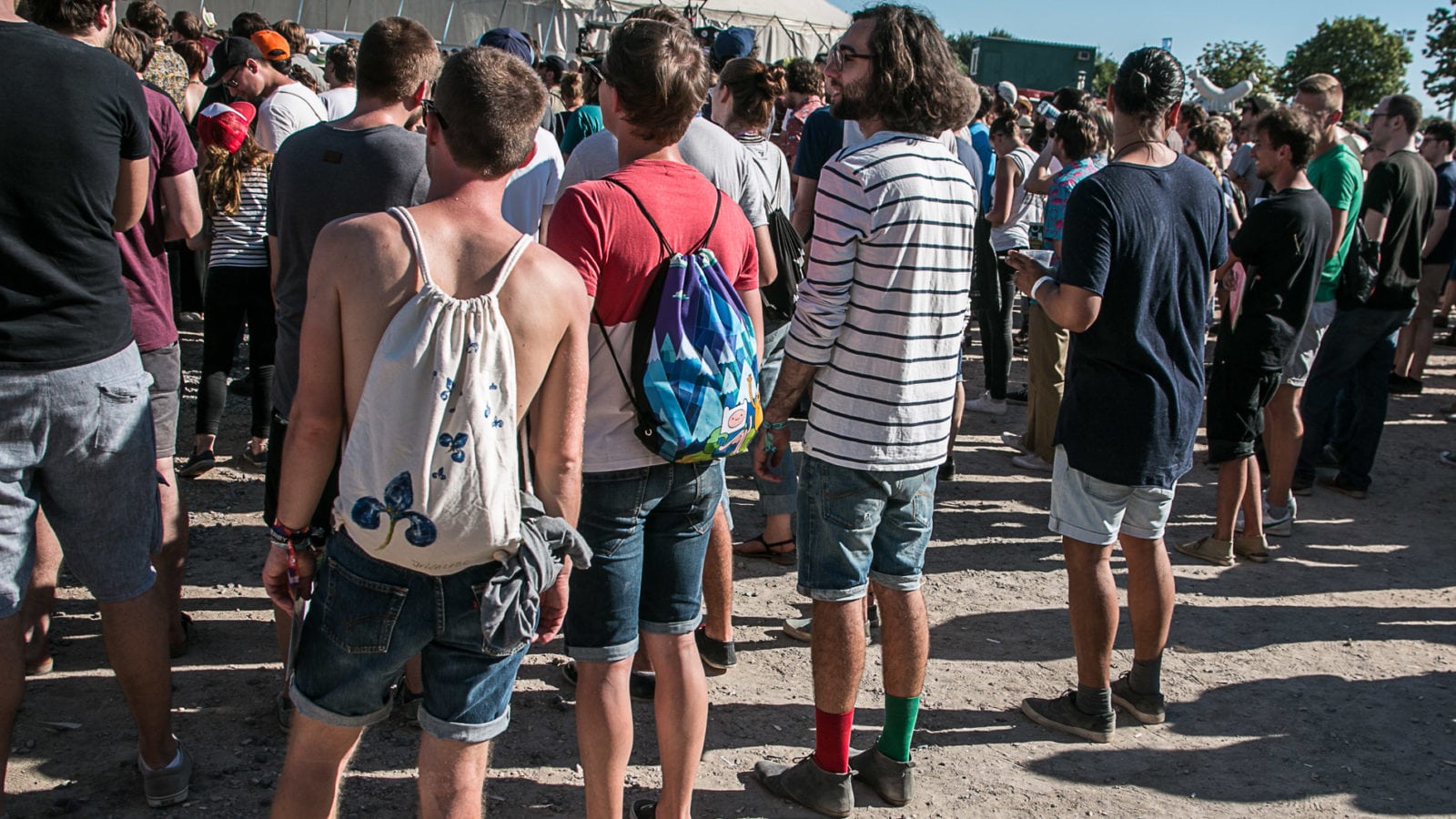 Festival Fashion Trend in Germany (Women)
Noticed a lot of girls using long scarves for a variety of functional needs like instant shade, stylish hair tie, or for hiding. 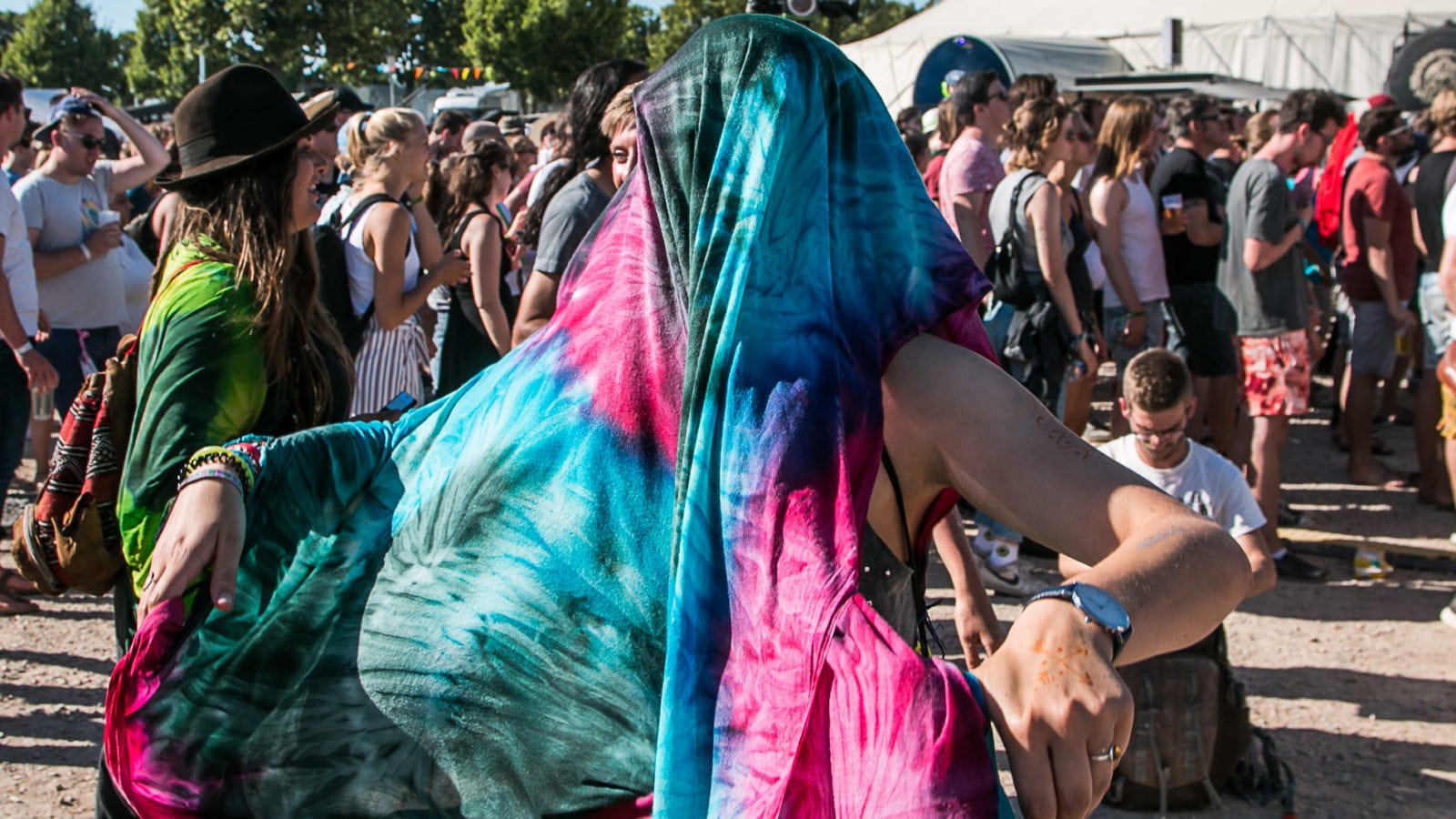 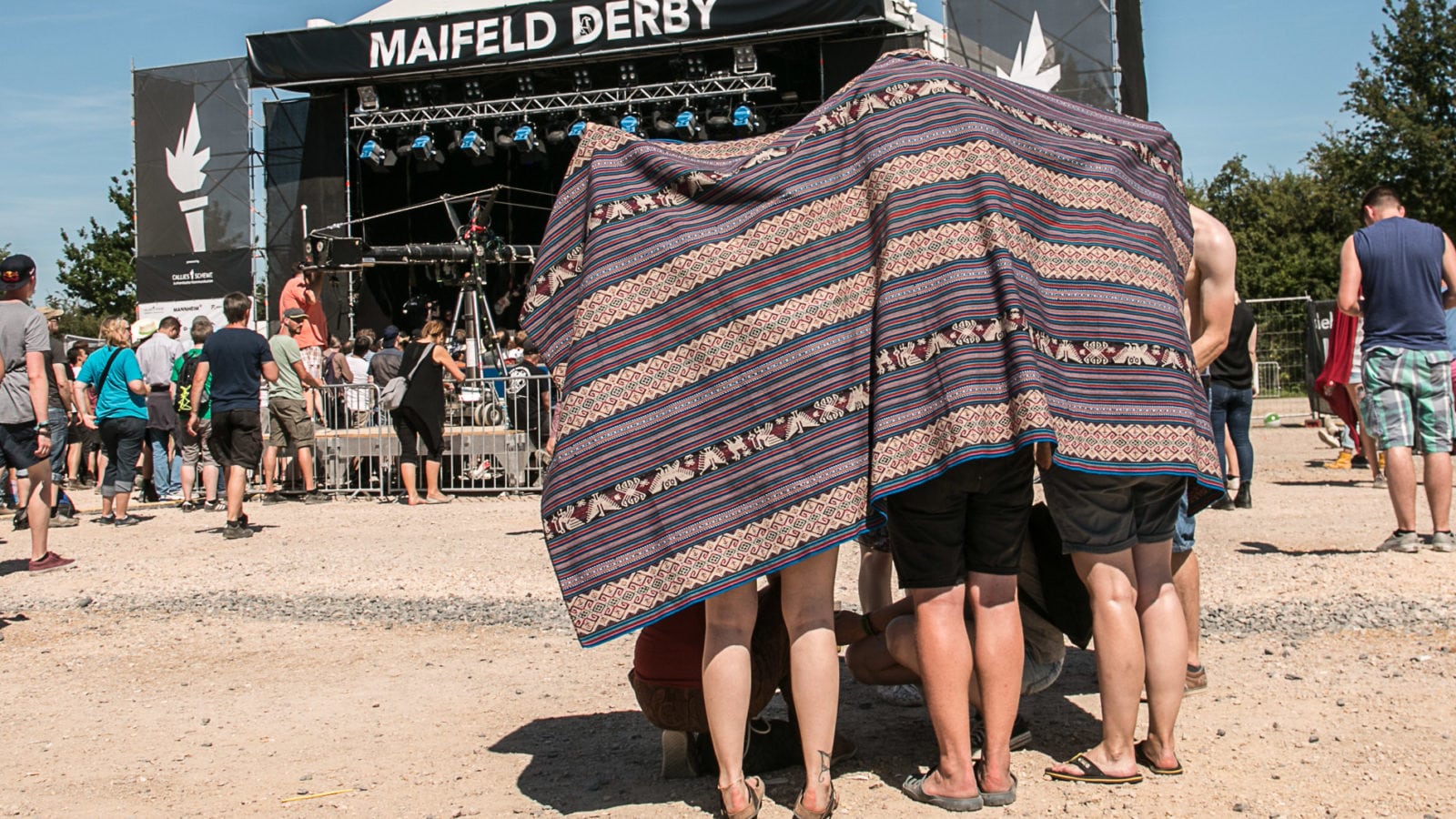 Best Use of a Melon
My neighbors introduced me to a Chilean classic called the Melvin, where you pour chilled wine into the iced half of a melon. Neither the wine, nor the melon were chilled, so I was just told to “close my eyes and imagine it’s cool.” 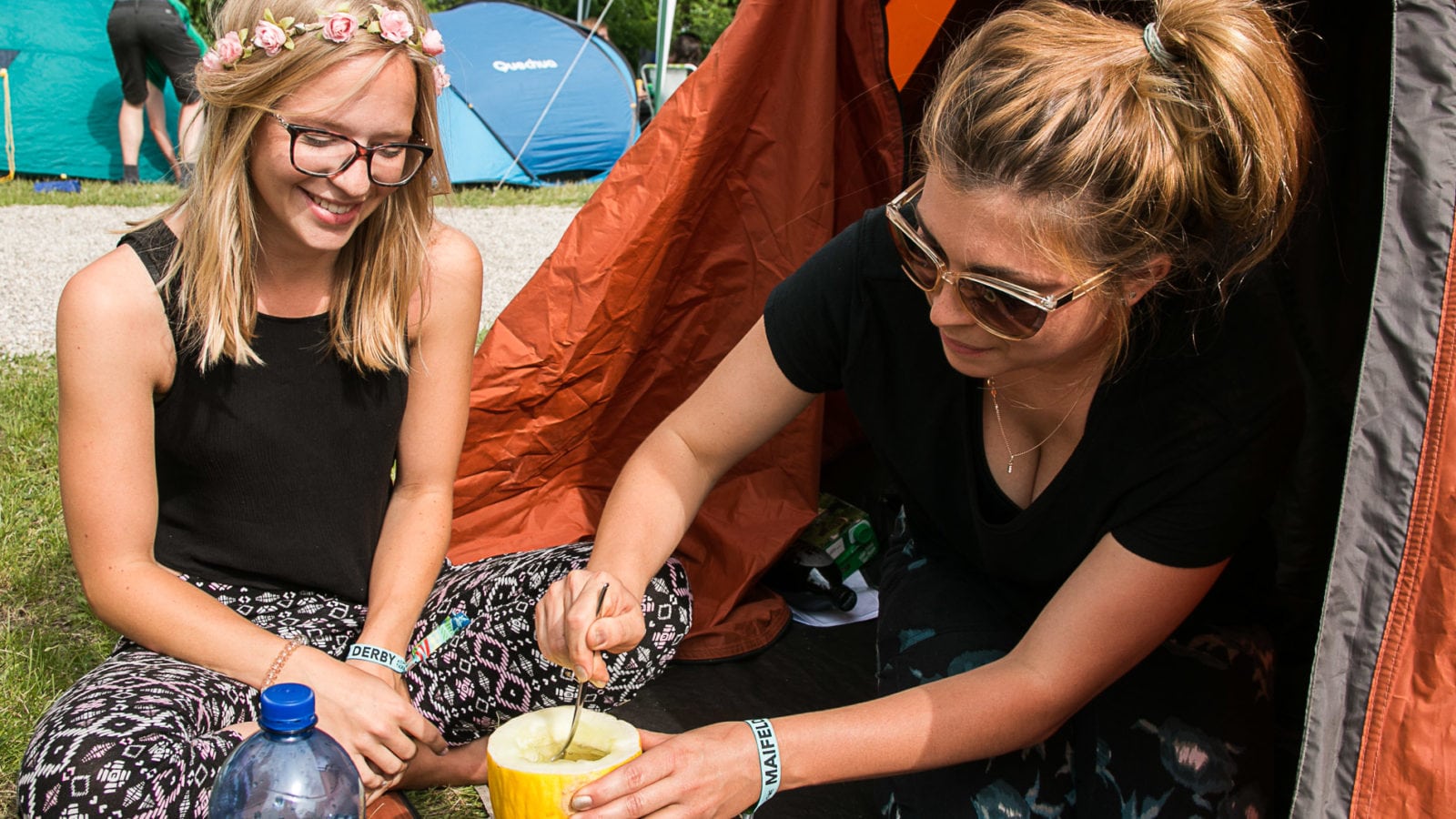 Best Festival Camping Drinking Game in the World
The most common drinking game at German festivals is Flunkyball, a complicated contest of beer chugging and running. I even saw the lesser known variant, Flunkyshoe, being played here. Or it just might have been a drunk German throwing his shoe at somebody. 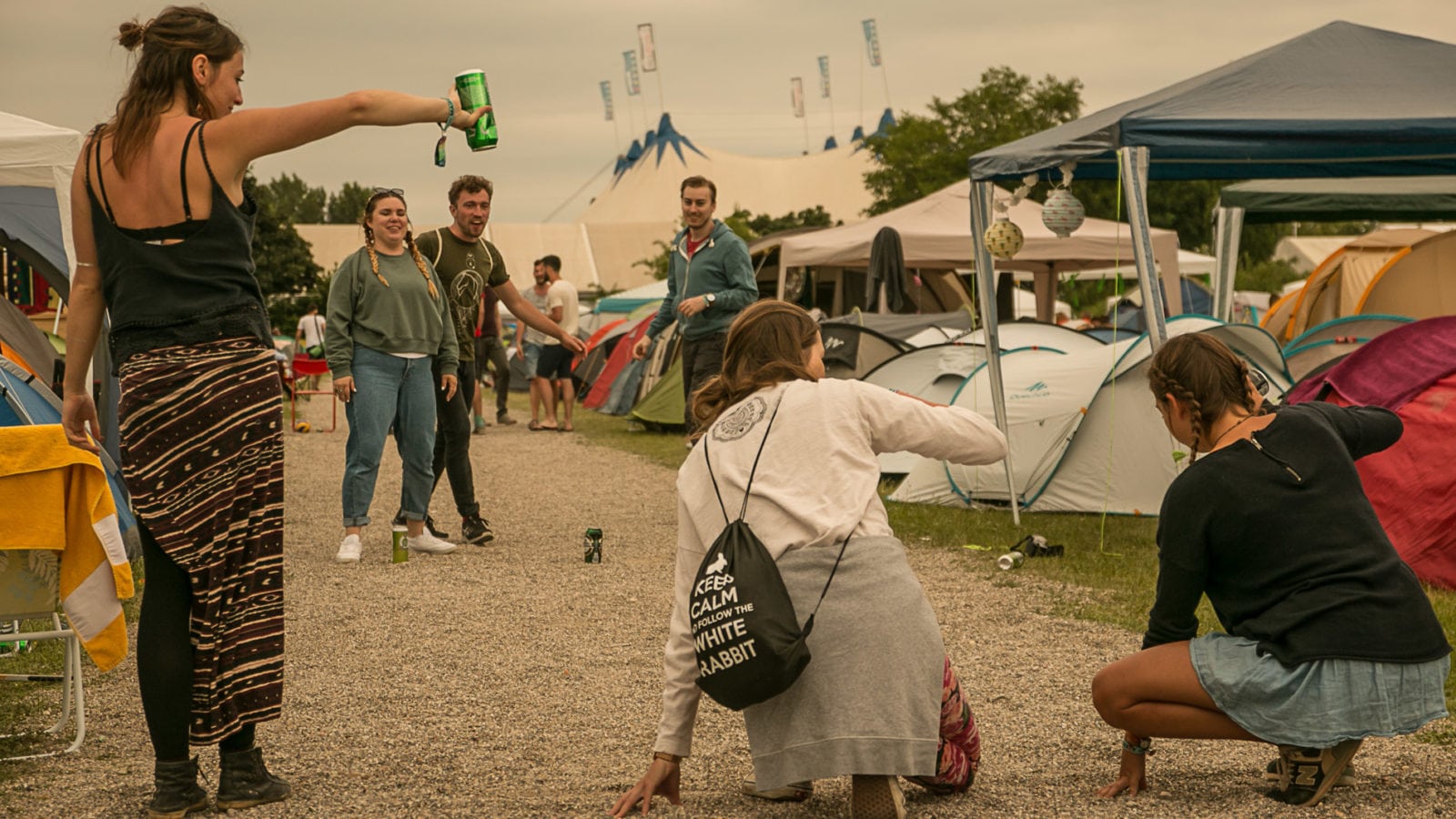 Best Fake Word of the Summer: “frinks”
While Bilderbuch may be singing in German, one of their songs (the instant classic sneakers4free), throws in some English with following chant “Free! Drinks! Frinks!”, and my new summer catchphrase is born. 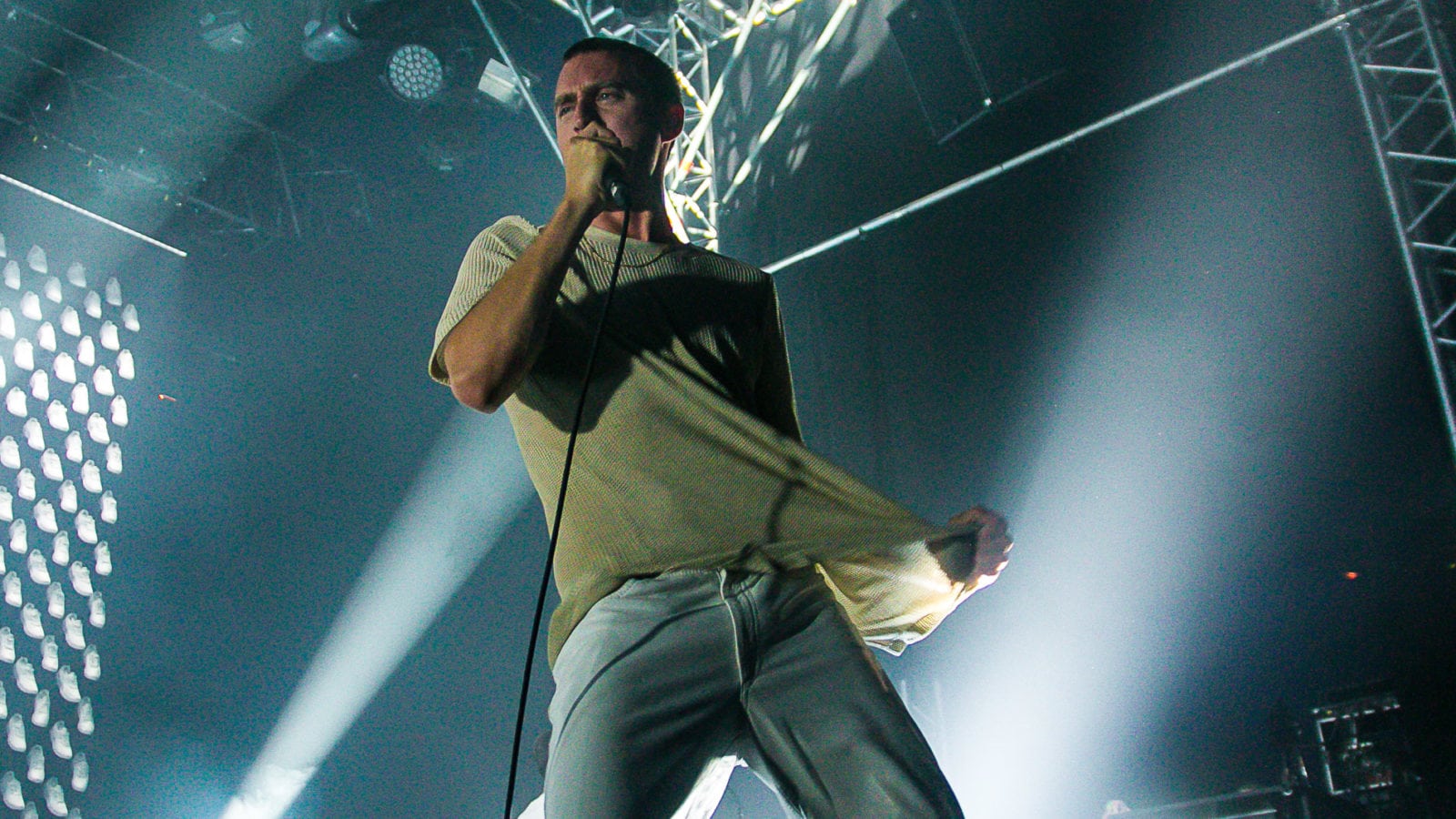 Best Recovery From a Near-Certain Festival Injury
During the semi-finals of the Human Hobby Horse Dressage, this fellow took a big step too far backwards, fell on his ass, and then turned it into a half-hearted somersault. Well done, sir. 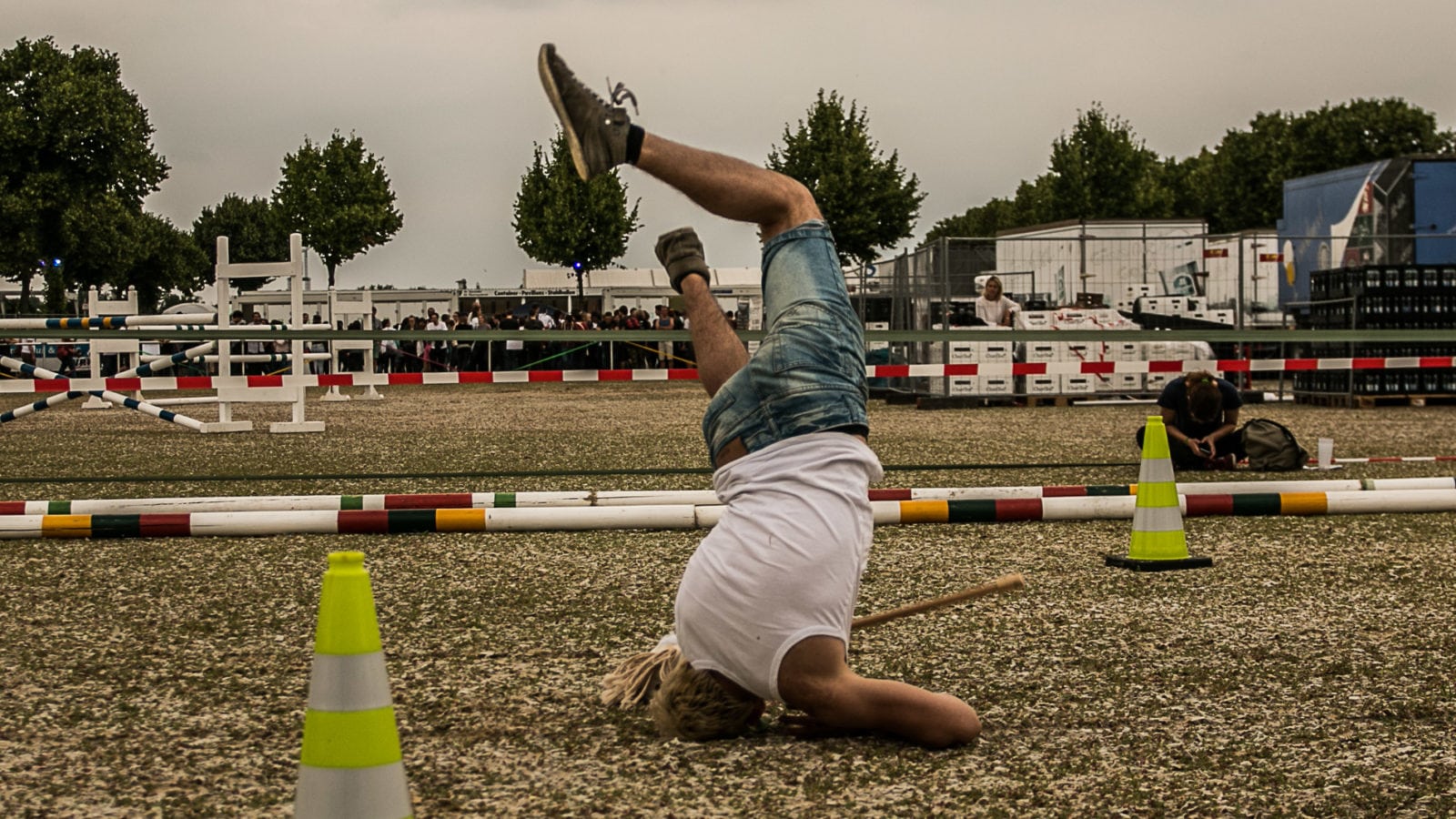 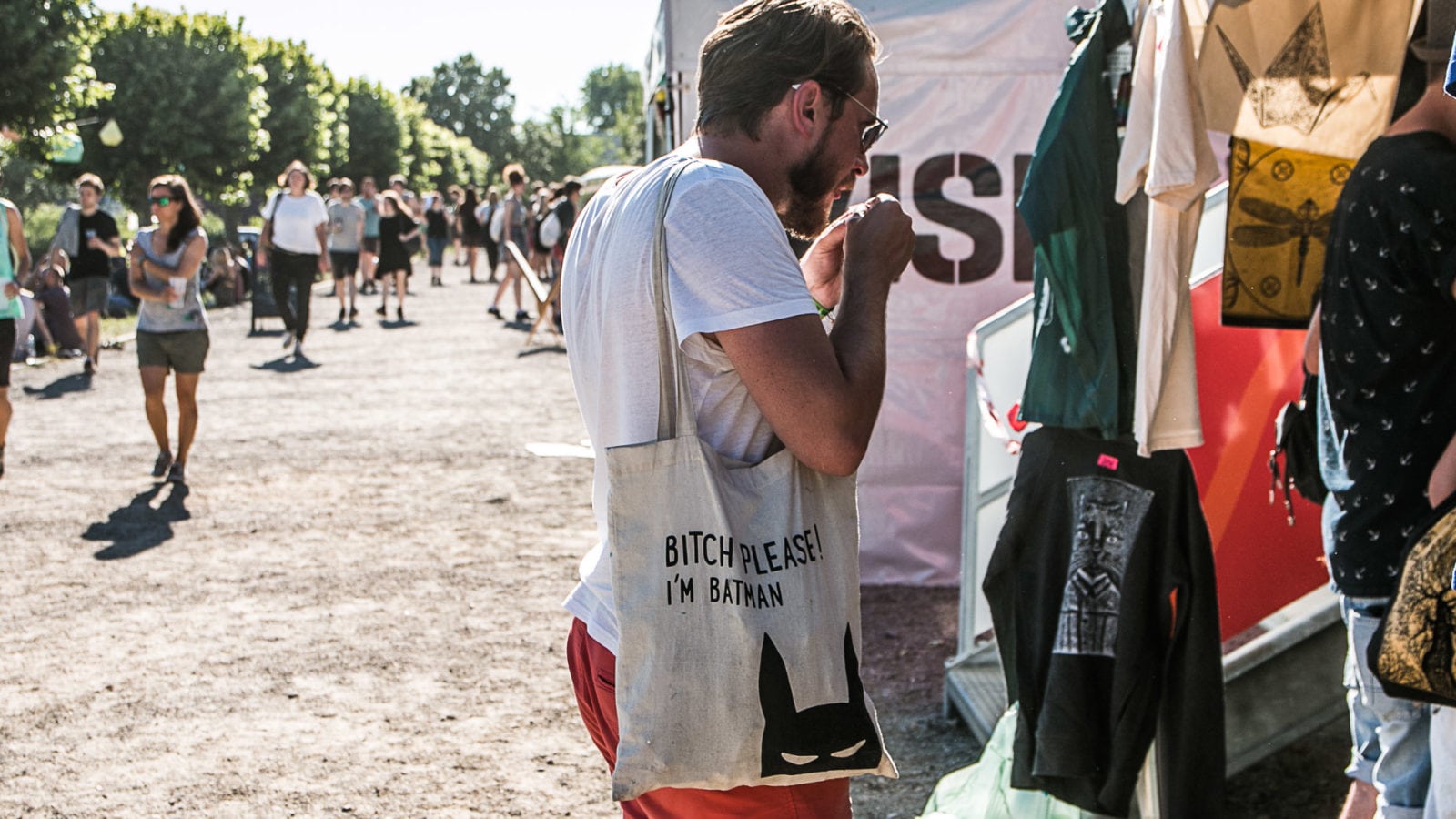 Best T-Shirt: Celebrity Edition
Jake Snider from Minus the Bear. He is a liker of jazz. 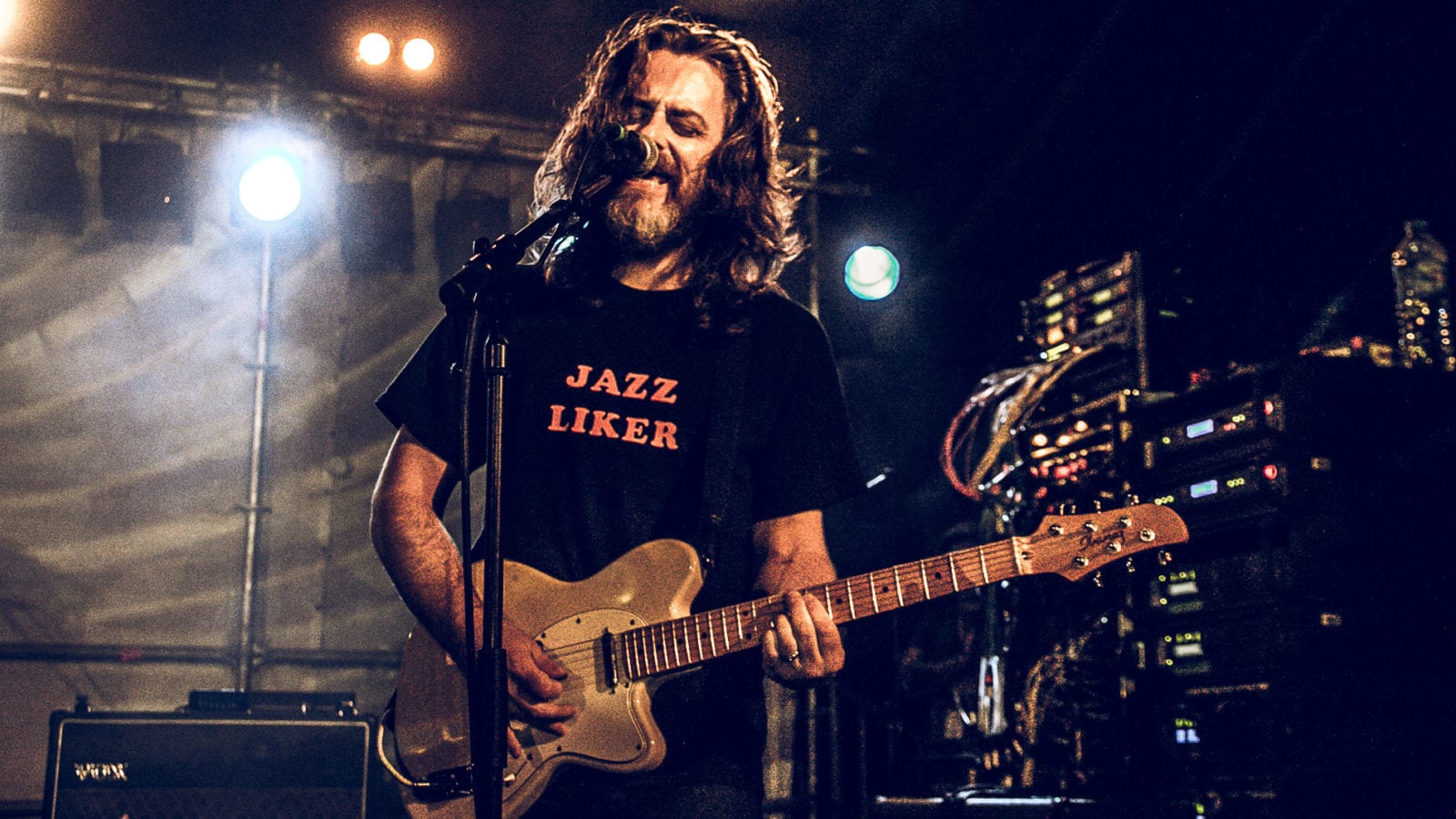 Like last weekend at TINALS in France, this smaller style boutique festival really fits my vibe. Everything from the camping to the music to the atmosphere really works, and once again, I’m nearly at full energy.

Statue of the Week: The “Happy Baby” Statue in Mannheim
Note: I have no idea what this statue is really called. 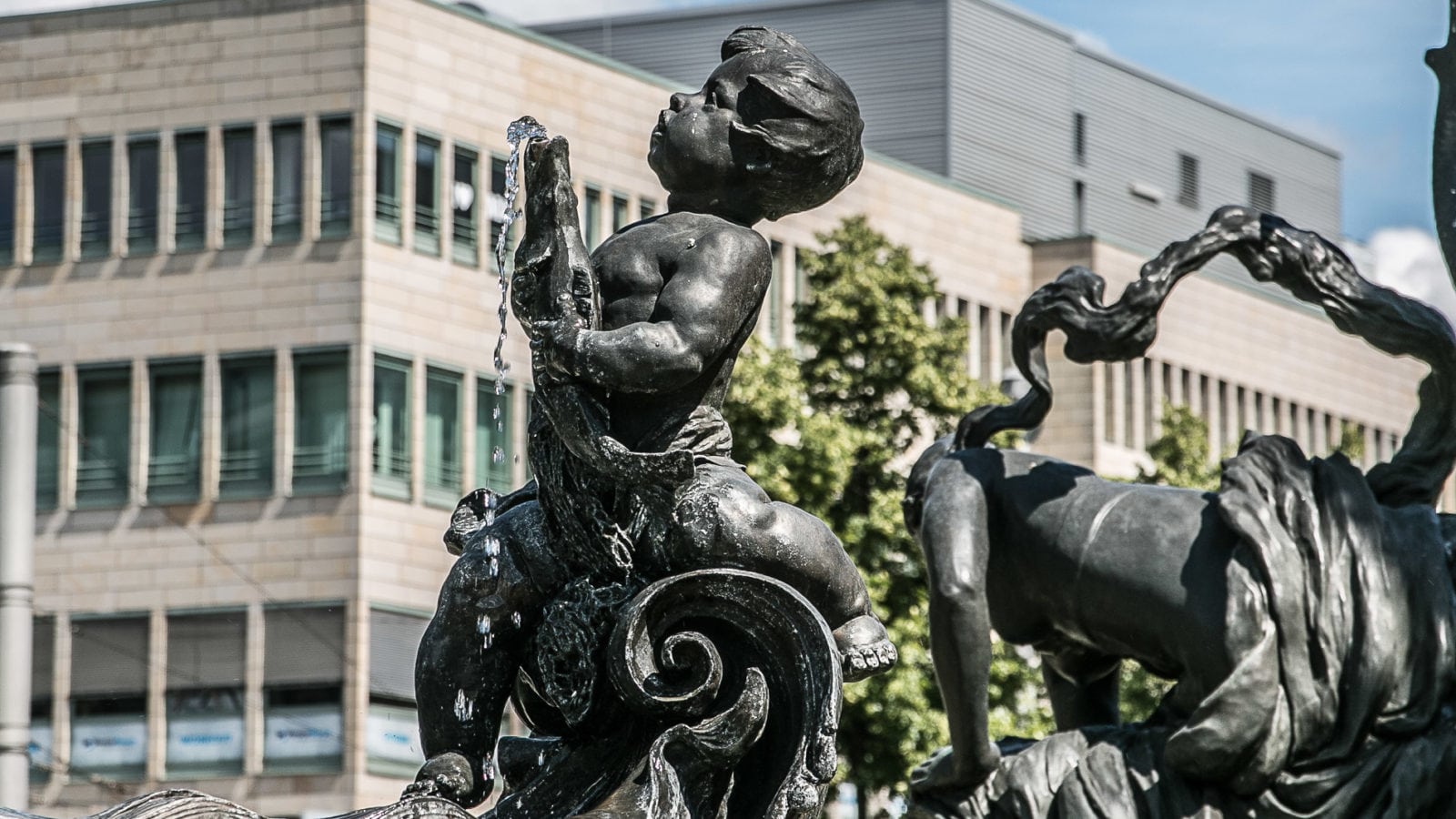 Corrections From Last Week: I bragged in my last recap about sunsets, and how it hasn’t rained yet on me. It did indeed rain on Sunday in Barcelona, but since I showed up late and missed it, I didn’t see any rain, and therefore will not count it in the official numbers. I will, however, post another picture of an epic sunset from Sunday at Mannheim. 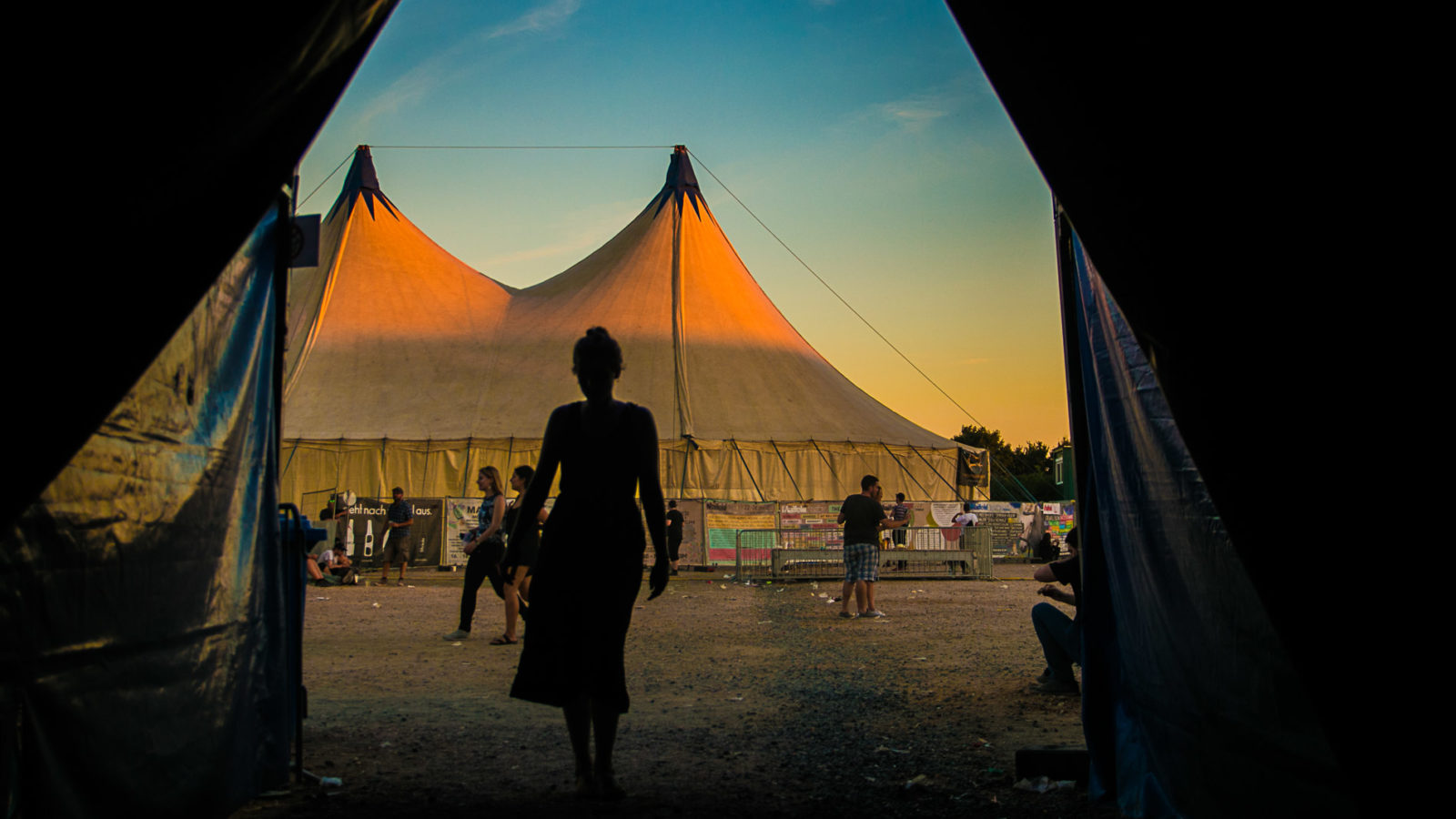